In 2016, Wellington Rugby is the second provincial union behind Northland Rugby to adopt the Blue Card Concussion Initiative. A Blue Card is issued to a player, who the referee suspects has suffered concussion on the field of play. The player must leave the field immediately and may not return until having completed the graduated return to play (GRTP) protocols - minimum 21 days for 19+ years and 23 days for under 19 players.

The Blue Card applies to Premier and Premier Reserve grades in the second round of competition and the Weltec 1st XV College Premiership during the 2016 season.

The following lays out the full procedure for the application of a Blue Card.

Referees appointed to premier and premier reserve grade matches in the 2nd round of 2016 competition have received education around the identification of concussion and the associated symptoms. Any referee in this grade now has licence to show a player a Blue Card if, during the course of a match, the referee identifies they have suffered a blow and consequently show indications to suggest that they may be suffering from concussion. There is no appeal right to the issuing of a Blue Card. The issuing of a Blue Card then triggers a formal off-field follow up procedure.

At the conclusion of the match the referee will report the Blue Card that has been issued to the WRFU.

The WRFU will draft a letter to the school and player concerned confirming that the player has been stood down from playing rugby because of concussion or suspected concussion. This letter outlines the process by which they can ultimately return to play. This process is as outlined in the New Zealand Rugby guideline for Community Rugby - Returning to Play Following Concussion - this is available here.

The essential elements of this guideline are that a player must:

It is recommended that the suspected concussed player seeks medical attention within 24 hours. To be assessed and provided with advice about undertaking a return to play.

Having completed a graduated return to play process as outlined in the guideline, a player must obtain medical clearance to resume playing.

A player must produce a clearance letter to be signed by the medical practitioner then returned to WRFU, to be permitted to resume playing. The player will have been provided with a specific form for this purpose. This must be received by the WRFU office 24 hours before scheduled return to play.

The player is then cleared to return to play.

The card removes any doubt as to whether the player should be removed on the suspicion of a concussion being present. There can be no opportunity for the player to return to the field on that same day if he "recovers".

The procedure outlined here has been endorsed by New Zealand Rugby for use in the community game.

The need for greater awareness of the symptoms and treatment of concussion is a priority in the RugbySmart programme and is a commitment from New Zealand Rugby (NZR) and Wellington Rugby.

Through RugbySmart coaches, players and referees are taught to understand and recognise the symptoms of concussion and take responsibility for the player's welfare if concussion is suspected.

Players must always get medical clearance before returning to training or play. Wellington Rugby's position on concussion is clear, and includes the coaching commitment that 'good technique is safe technique'.

To find out more about NZR's concussion guidelines and what you - or someone you know - has to do to return to play when you've had a concussion, download the Returning to play following concussion flyer. 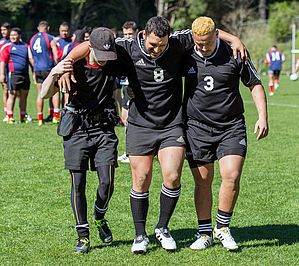