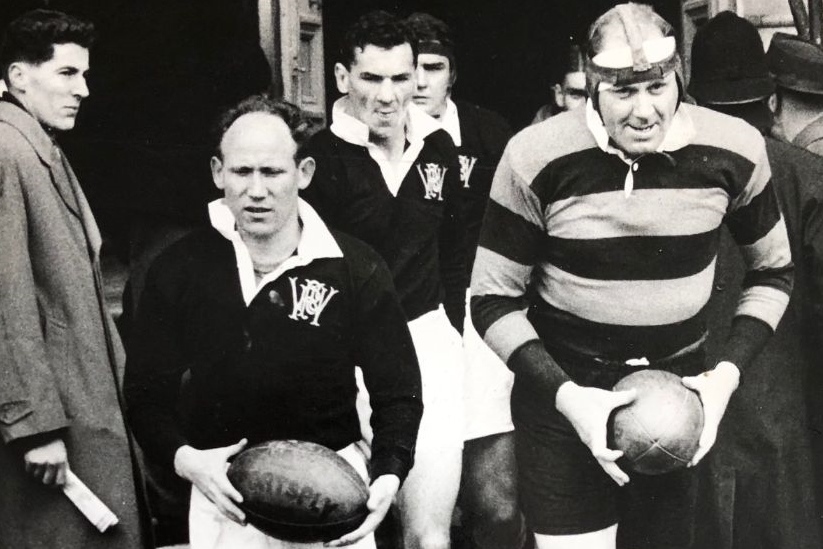 Jackie's last game for Wellington v Canterbury (8-8), 28 September 1957. He led the team out ahead of Don McIntosh and Nev MacEwan (partially obscured)

There will be a generation of Wellington rugby fans who will be greatly saddened to learn of the recent death of John Gray ('Jackie') Dougan.

Jackie was a headline star of Wellington club rugby in the 1940s and 50s. He has died aged 93 in Masterton. He had been in ill health for some years, though in his time Jackie could regale anyone who cared to listen to the many great stories from his time in the limelight for Petone and later Onslow. It was not always plain sailing for him, with injuries and the rise of the University club barring the way for a while, but Jackie had a real stars personality all his life.

As a first five-eighths he made his debut for Wellington as a colt from the Petone club in 1947. His family background was Scottish. There were five boys in all; indeed one of his brothers Bill, who was an All Black trialist in 1948, had been born in Dumbarton in Scotland. Family members light-heartedly joked recently that Jackie had actually sailed 'free' to New Zealand (inside his mother's womb!) and he was born here soon after docking in 1926. They settled in Titahi Bay but the boys were soon drawn to live and play their sport in Petone. There are generations of Dougan's still living in 'The Village' to this day. (Another of the brothers Bertie was the father of the 1970s All Black John ('D'Arcy') Dougan. The President of the Petone RFC now is Robbie Dougan who was the son of Bertie Dougan.)

The family all lived in Jessie St for a time, in the same street where later the 1970s All Black captain Andy Leslie was also raised.

The records show that Jackie Dougan was the number one pick at first-five for Wellington for his first four seasons; but then injury and the rising strength of the University club (with four All Blacks in the 1951 team to Australia) halted Jackie's permanancy in the team. There was also the feeling that his open, jinking style of rugby was not always appreciated by his coaches in some of those seasons. Back then a player could kick out on the full from any part of the field so many teams preferred to hug the touchlines rather than risk flamboyant back play.

But soon Jackie was appreciated by the grounds and the Petone team's games v University often saw six or seven internationals in action. One game drew a crowd of 24,000. Invariably University won in those years; indeed Varsity were Jubilee Cup winners in 1952, 53 and 54. Usually they had to beat Petone to get their hands on the trophy.

Jackie was also a top club cricketer at Petone, good enough to play at Hawke Cup level - and his prowess as a batsman led to one of the biggest  and most sensational stories of that time.

It came in the summer season of 1954-55; Jackie was in the Petone cricket club and they were battling to win that summer's main sports trophy. At the end of the first day's play of the grand final the winning of the title looked secure for Petone. But the second day of the game was not due to be played until the following weekend. By that time the Petone rugby club's bosses had reminded Jackie that he also had obligations to attend the club's final senior rugby trials.

But Jackie was nothing if not loyal; seven days later he stayed and completed the Petone cricket club's victory. But the rugby coach of the day was adament that as Jackie was not at the rugby trials he damned-well couldn't  be in the Petone senior rugby squad! Jackie therefore immediately indicated he would leave the rugby club and switch instead to the Onslow RFC.

The news of this was massive all around Wellington; the newspaper headlines were huge, indeed there are reports that with Jackie's departure a high number of fans left the Petone club to support play up at Nairnville Park instead. Jackie's influence in any game was underscored when his new club then won the prized Jubilee Cup for the first time.

Onslow did that in superb style. In the final round robin game at Athletic Park v Petone it was Jackie who put in a high cross-kick and the Onslow winger Rob Blair lept high to grab it from the sky and score in the corner. The hulking lock forward JIm Kinvig then landed the conversion and victory went to Onslow by one point. Andy Leslie recalls that the 'blind's were drawn all over Petone the next day!'

Because they loved his brilliance and daring Wellington supporters of rugby could never understand why Jackie Dougan never made the All Blacks. Indeed there were always lots of rumours. Like his Uncle Bill he had only one All Black trial match but that was in 1957, a decade after his first-class debut. He was 31 years old in his trial. But it might also be said the Wellington fans didn't care too much. If Jackie had been away on any All Black test or tour that would have meant he would have been away from his home base and his fans for too long!

Even after Jackie retired from Onslow true to his generosity of spirit he even later came back and enjoyed one last season for the lowly-ranked Titahi Bay club.

This writer recalls Dougan as a wonderful running five-eighths, one with great balance and style, and who was always impeccably turned out to play, Invariably with his turned up collar helping to add to his smooth image.

In even modern times at the Wellington Rugby Union's annual Old Timer's Day Jackie was always in such good physical condition that he could wear his original Wellington blazer, with no problems at all in fitting it. On his pocket were the years 'Wellington 1947-1957.'

He was a true Wellington man. We were pleased to have him almost exclusively. Instead it was the All Blacks who missed out on seeing his marvellous talents.