Wellington club rugby off to a flying start on Saturday 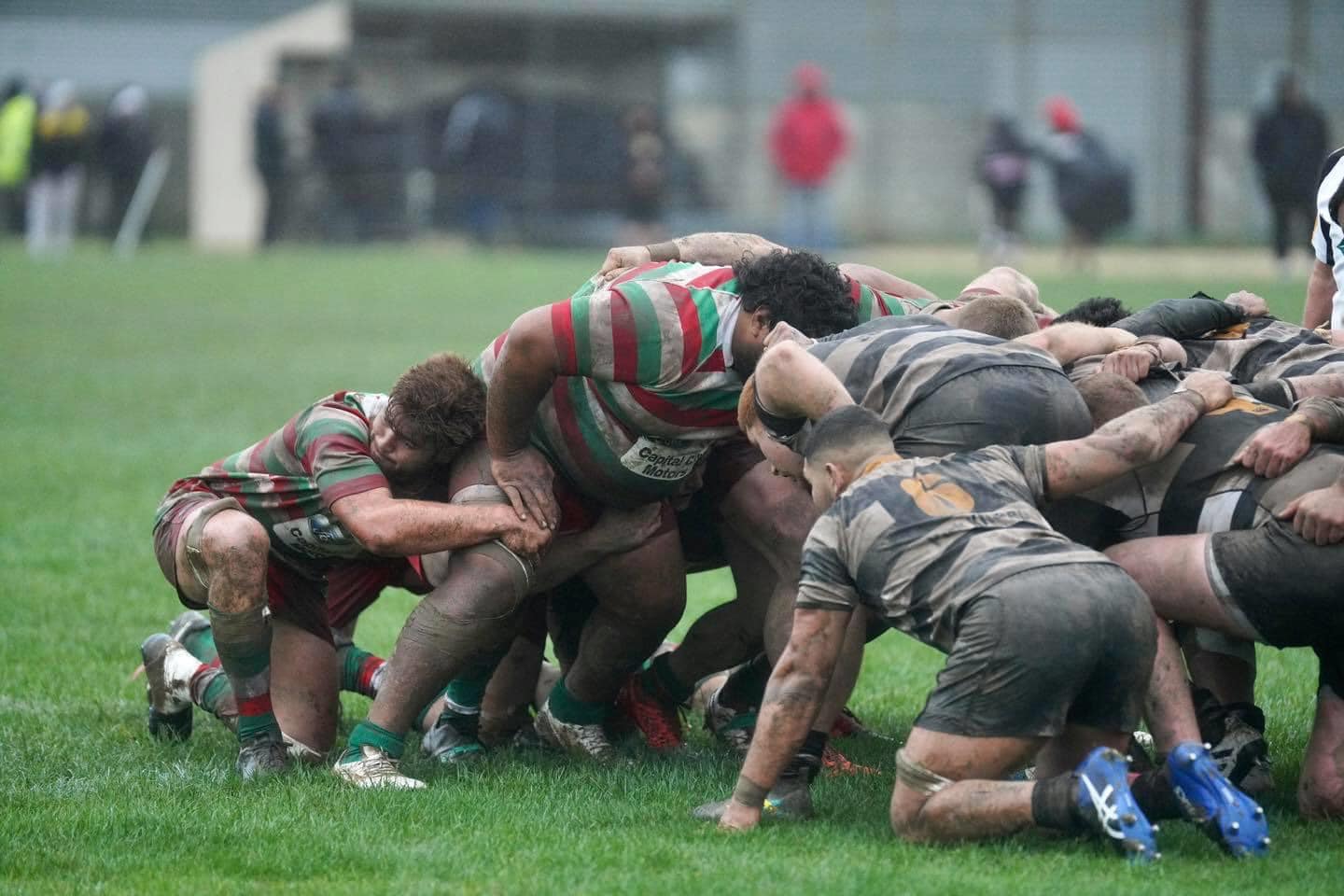 After a long wait, the 2020 Wellington club rugby season got off to a flying start on Saturday, in wild weather around the region that proved a factor in the run of play of most games.

In men’s rugby, there was a pair of striking results at Porirua Park in the matches between home club Northern United and visitors Marist St Pats.

In the Harper Lock Shield match between two sides laden with Premier experience, it was Norths that swept to a 43-10 win over last year’s unbeaten Premier Reserve winners MSP. Norths led 12-10 at halftime, but kicked clear in the second half with the wind at their backs to win well.

The Premier match that followed was between the 2019 Jubilee Cup champions Norths and last year’s Hardham Cup winners MSP, with the latter earning a comprehensive bonus point 28-5 win.

Playing into the wind, MSP set the tone for their season ahead by scoring a well-worked team try. Second five-eighth James Proctor was the finisher, scoring the first of his two tries for the day.

Norths replied with a quick tap penalty and try in the corner to No. 8 Luca Rees and they trailed 5-7 after 20 minutes. MSP replied through halfback Jonathan Taumateine in the 32nd minute who scored from a dart from a scrum to put them up 12-5 at halftime.

Now with the wind, MSP extended their lead to 15-5 with a Proctor penalty, followed by his second try midway through the half after a Norths fumble inside their 22, making it 20-5.

MSP sealed the win with a long-range penalty to debutant first five-eighth Aidan Morgan and then a try on fulltime to right wing Willie Schutz .

MSP won the Maurice Standish Cup off Norths as well.

Petone and Tawa were the two other sides that earned bonus point wins to start their Swindale Shield seasons.

Tawa also won the early game 74-0, the biggest win of the opening afternoon in terms of points across the three grades.

Paremata-Plimmerton were sharp on attack but failed to finish their opportunities, with just No.8-turned-tighthead prop Peni Tapau crossing the whitewash for them. They also lost their debutant first-five Dustin Wawatai to a broken ankle.

For the Rams, prop Rhodri Evans, flanker-turned-centre Daniel Schrijvers and replacement outside back Scott Svenson scored their tries.

At Hataitai Park, the Wellington Axemen beat visitors the Avalon Wolves 17-14 to start their 150th season.

Avalon beat the Petone Brotherhood 22-17 in the early fixture.

At a wet and wild Nairnville Park, home side Old Boys University retained both the Beet Algar Rosebowl and the Bill Brien Challenge Shield with a convincing 25-5 win over Poneke.

In a hard-fought match, it was Old Boys University’s powerful scrum that proved the telling difference between the two sides. Tighthead prop Jonathon Fuimaono was particularly strong all match.

Poneke was in the game for long periods, but a handful of handling mistakes and ill-directed kicks at key moments also proved costly, as OBU turned territory into points in building an unassailable 18-0 lead.

With the wind at their backs, the Goats went to a 6-0 lead after 15 minutes through a pair of Dale Sabbagh penalties, before the first of two first half tries was scored by hooker Wirangi Parata off a dominant lineout drive.

The second of these tries and most telling play of the match came right on halftime, when OBU won a penalty off a Poneke loosehead scrum inside their own 22, and repeated the dose with the try this time to openside flanker Matt Sleith.

The skies visibly darkened early in the second half, as Poneke threw everything at OBU, who largely absorbed their efforts except for a solitary 58th minute try to No. 8 Galu Taufale to close the gap to 18-5. Abandoning their scrum, Poneke tapped and drove towards the line from 5 metres out and were rewarded.

OBU clinched the match a few minutes before the end – off a tighthead scrum win and try off the back to No. 8 Shamus Hurley-Langton.

The Nairnville Park early game went the other way, with Poneke prevailing 15-13.

OBU led 13-5 at halftime, but with Greg Foe - playing his first rugby since a knee reconstruction - directing play on the side of the scrum, Poneke came roaring back to score two consecutive tries in the second half to hit the lead. They made their tackles and pushed OBU back with the wind advantage to earn a big first up Harper Lock Shield win.

At the Polo Ground, Hutt Old Boys Marist extended their unbeaten run against Ories to seven consecutive matches scrapping their way to an 11-3 victory over the determined hosts who fielded five Premier debutants.

Malo Manuano opened the scoring with an early penalty for the Magpies, but scoring chances were sparse.

The only try of the game was spectacular and occurred midway through the first half. Ories lost the ball in a maul and Hutt swiftly swung right with fullback Salesi Rayasi injecting himself assertively into the backline and circling the fullback. HOBM led 5-3 at halftime.

A scrappy second half went scoreless until 10 minutes from the end when Brandyn Laursen kicked a 45-metre penalty on the angle. to make it 8-3. Laursen, an assured presence all afternoon, would have the final say when he kicked a dropped goal to seal the victory.

The curtain-raiser also went the other way, with Ories beating HOBM 19-14.

The results in the four Rebecca Liua'ana Trophy matches went with the form guide.

Defending champions Oriental Rongotai got underway with a 54-0 win over neighbours Marist St Pats, pulling away after leading 19-0 at the break.

Norths scored the same number of points as Ories, but did concede a late penalty try to Old Boys-University for a 54-7 result.

Paremata-Plimmerton edged out Hutt Old Boys Marist 30-24 at Ngati Toa, and Avalon saw off Poneke 20-5 to complete a sweep for the home teams.

The Petone Ponies had the first round bye.

Norths were kept honest for much of the first half by the OBU Impalas who dominated territory but couldn’t break through. The Impalas also lost halfback Georgia Adams to injury early, and with few reserves this would prove costly as the game opened up.

This started on 25 minutes when Norths broke out and outstanding lock Syntyche Tuimaolo finished off a sweeping team movement in the far corner. Second five-eighth Ngarangi David scored a similarly constructed team try and then fullback Harmony Ioane crossed to put them up 20-0 at the turnaround.

Now with the wind, Norths scored two quick tries, to halfback Jodeci Rere and then to Tuimaolo, to put the game out of reach. Ioane and Tuimaolo scored again as they pulled clear.

At the Polo Ground, defending champions Ories produced a strong second half in their half century win over MSP. The visitors were genuinely competitive in the first-half with two intercept breakouts, some extended phase play, and torrid defence.

However, Ories second-five Bernadette Roberston powered over for her second try just before halftime and the points valve was opened.

Black Ferns lock Joanah Ngan-Woo was all action, and she scored Ories’ fourth try and was a force in general play. Leti-I’iga, Fa’asua Makisi, Isis Touw, and Amanda Rasch completed the scoring. Amanda kicked seven from eight, including at least two sideline crackers.