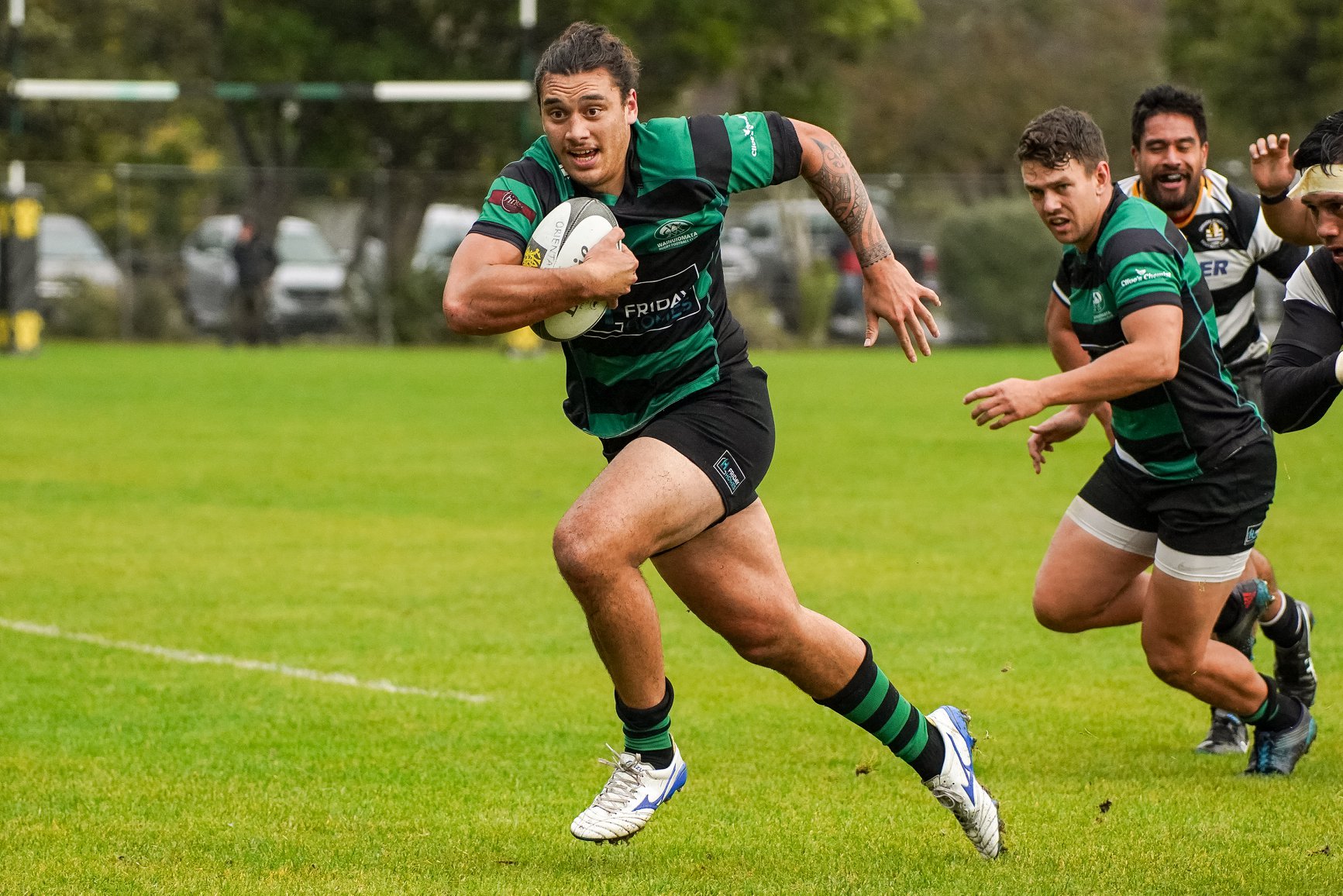 There are two rounds to play in the Premier Swindale Shield and 10 of the 14 teams still have much to play for.

Northern United have joined leaders Hutt Old Boys Marist in the ‘top 7’ and with a place in the championship round Jubilee Cup, while three teams are tied in seventh place, after a series of emphatic wins in windy, showery conditions on Saturday.

Expectedly, Hutt Old Boys Marist put away Johnsonville 50-14 at Helston Park to register their eighth straight win of the competition and move to 39 points on the standings.

Norths consolidated second by beating the Upper Hutt Rams 48-22 at Onepoto Park to move to 34 points.

Oriental-Rongotai are the only other team that can mathematically win the Swindale Shield, despite being overhwelmed 0-27 by Wainuiomata at William Jones Park, to remain on 30 points.

The title race is not over however, with HOBM set to play Ories this coming Saturday and then Norths in the 10th and final round.

Poneke are fourth on 26 points, despite being well beaten 13-41 by Old Boys University at Kilbirnie Park.

A group of three teams are just behind on 25 rounding out the current top 7 standings, these being Wainuiomata, OBU and Petone.

Like Wainuiomata and OBU, Petone had a sizable bonus point win on Saturday, beating the Wellington Axemen 58-22.

Of the rest of the field, Tawa on 22 points, Marist St Pats on 21 and the Upper Hutt Rams on 15 are eighth, ninth and 10th respectively and can still qualify for the Jubilee Cup.

Both Tawa and MSP continued the high scoring theme on Saturday, with Tawa beating the Avalon Wolves 43-14 and MSP defeating Paremata-Plimmerton 63-7.

The Rams have kept their championship chances alive for another week by virtue of a late bonus point try they scored in their defeat to Norths.

Avalon on 12 points, Wellington on 10, Paremata-Plimmerton on 4 and Johnsonville on 1 will be making preparations for the Premier 2 second round Hardham Cup when they convene at training on Tuesday night.

In some round eight Swindale Shield highlights, in which all seven winners won with bonus points, leaders HOBM beat Johnsonville who showed fight for long periods but couldn’t match the Eagles’ firepower.

This was led by Hurricanes training squad hooker James O’Reilly, who scored two tries. First five-eighth Glen Walters also scored two tries and 20 points, as the Eagles led 26-14 at halftime and pulled ahead in the second spell.

Wainuiomata kept Ories scoreless at home at William Jones Park, while scoring four tries themselves. They led 10-0 at halftime on the back of a penalty and conversion to fullback Josh Robertson-Weepu and a try to second five-eighth Peter Umaga-Jensen.

Wainuiomata more than doubled their score with a pair of match-winning tries early in the second half, through wing Saita Tuaoi and flanker Marvin Karawana, before sealing it with another try to inside centre Umaga-Jensen.

Early in the second half, OBU scored again through right wing Joe Hill after a surge by No. 8 Teariki Ben Nicholas and first five-eighth Dale Sabbagh converted from the sideline and at 29-6. Poneke fought back and would score a try through Alex Morrisey but that was their only reward.

At Onepoto Park, Norths retained the Terry Farrow Memorial Cup against the Upper Hutt Rams by winning by an 8 tries to 4 margin.

Norths scored their first try from the opening kick-off, with No. 8 Luca Rees scoring his 14th of the season. The Rams quickly replied through Jayden Treviranus, but Norths had four more by the break including a double to Dudley Parsons against one from Konelio Feaunati.

Norths continued to pile on points in the second spell, centre Losi Filipo and prop Gerard Faitatoa both crossing to seal victory.

At Petone, the home side beat the Wellington Axemen 58-24, 9 tries to 3, to retain the Bill Francis / Jack Taylor Trophy. It was all-too easy for Petone at times, who, like Norths, scored early and kept their foot on the accelerator throughout.

Petone would lead 27-0 late in the first half and then 27-10 by the break with the Axemen kicking a penalty and scoring a good long-range try of their own through lock Angelo Smith.

Petone capitalised on poor defence early in the second spell, scoring twice more to extend their lead. The Axemen came back with a penalty try, but Petone pulled away again. Flanker Jacob Gooch and replacement wing Sam Blackburn both scored braces.

At Fraser Park, Tawa had the game wrapped up at 26-0 by halftime against the Wolves. Early tries to fullback PJ Iosefo and left wing Romu Senileba set the tone, These were followed by two more, to prop Tolu Fahumaokio and centre Tom Maiava.

Avalon started the second half with purpose but Tawa weathered this and outscored them three tries to two in the second 40 minutes. Iosefo finished with a hat-trick of tries for Tawa.

At Ngatitoa Domain, Marist St Pats boosted their Jubilee Cup hopes by beating home side Paremata-Plimmerton 63-7. Playing into the wind, MSP took a 32-0 lead into the break. MSP scored again to make it 39-0 and there was no coming back for Paremata-Plimmerton from there.

Three of the scheduled women’s sixth round matches went ahead this weekend in the Women’s Rebecca Liu’ana Trophy, after Hutt Old Boys Marist defaulted to Oriental-Rongotai on Friday.

Northern United were made to work hard before beating OBU 27-17 at Nairnville Park after leading 15-12 at halftime and then coming back after OBU scored the opening try of the second spell and briefly took the lead.

Ories stayed in their clubrooms and collected a bonus point win, defaulted to by HOBM

In the early game at Onepoto Park, Norths leapt out to a handy lead only for the Rams to close it to 25-34 inside the last 10 minutes. But Norths had the final say with two closing tries to prevail 46-25. They are second behind MSP with seven wins.

HOBM remain third but were beaten by Tawa 22-19, lifting Tawa from bottom into 6th while Petone beat Paremata-Plimmerton 22-12 in a pair of results that could have significant implications on the second round with two teams potentially being relegated. The fourth match saw Norths keep the Upper Hutt Rams winless, prevailing 34-6.

At Petone, the home side went ahead 12-0 early with a pair of tries. Paremata-Plimmerton hit back with a runaway try to their first five-eighth to make it 12-7. But that was as close as they would get. Petone kicked a penalty and then scored the try of the match with their centre cutting through to make it 22-7 at halftime.

Oriental-Rongotai remained in charge of the Colts Division 2 standings winning 31-17 over Wainuiomata while OBU Black edged out Johnsonville 15-14. Avalon and Wellington met in the other match.

The Upper Hutt Rams and Avalon each won their fifth straight wins today in the U85kg JC Bowl first round competition.

The Rams beat Eastbourne 27-5 and Avalon battled past the Johnsonville Terrahawks 17-10.

Wests had their first win of the season in beating MSP 17-14, while Wellington beat the OBU outfit 47-14 and the HOBM Howlers met Paraparaumu in the other match.

The Avalon Knights and the Stokes Valley Chiefs made it three from three in the First Grade Thompson Memorial Trophy, with Stokes Valley beating Norths 46-19 and Avalon toppling OBU 24-19. In the third game, defending champions the HOBM Barbarians overcame the Wainuiomata Warriors 56-15.