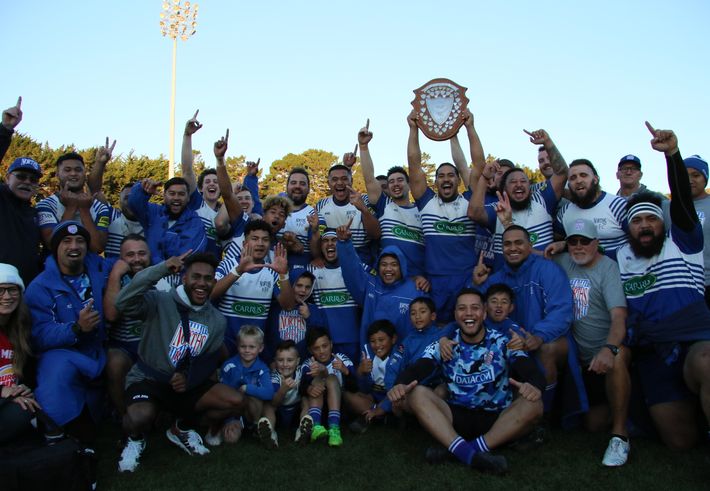 Five rounds in and five to go.

The 2019 Swindale Shield enters its second phase this coming Saturday. A topsy-turvy first half so far has already thrown up several surprises and the race for the ‘top 7’ to play in the Jubilee Cup in June and July is intensifying.

A look at the 14 teams ahead of the next five weeks of the season follows:

Hutt Old Boys Marist
Position: 1st
Points: 24
Big match to come: Round 10 versus Northern United at the Hutt Rec – a possible ‘virtual’ first round final if both keep on winning.
Prospects: With their fifth straight win on Saturday, the Eagles are probably safely in the Jubilee Cup already. They will want to keep their foot on the throttle to win their first title since 2015 – starting this weekend with the McBain Shield clash against Petone. Ories and Norths to play in final two weeks, so a tough finish.

Northern United
Position 2nd
Points 22
Big match to come: Round 8 versus the Upper Hutt Rams for the Terry Farrow Cup and at Onepoto Park wearing Titahi Bay colours as part of their heritage celebrations. They are also playing Paremata-Plimmerton the week before in Porirua club jerseys.
Prospects: Had a big win against Tawa on Saturday, and a run home that includes Paremata-Plimmerton should ensure they are safely in the top 7. Can they defend their title? Possible last round decider against HOBM.

Oriental-Rongotai
Position: 3rd
Points 21
Big match to come: Round 7 versus Poneke for the Jim Grbich Memorial Shield at the Polo Ground – always a cracker of a local derby match and valuable competition points on the line.
Prospects: The Miramar contenders are in good shape but have a tough run home and any loss of form could prove dire. If they can get past Norths, Poneke and Wainuiomata in consecutive weeks their ninth-round match-up against the Eagles could be a title deciding clash should others stumble.

Poneke
Position: 4th
Points: 20
Big match to come: As well as the Grbich derby against Ories (above) which goes without saying, Round 10 versus Petone for the F.J. Tilyard Shield at the Petone Rec is a fixture stooped in history.
Prospects: Poneke are realistically the only other side that can lay claim to winning the Swindale Shield after the three above, and victory over the Avalon Wolves this coming weekend will advance their cause. Ories, OBU, Wellington and Petone to come after that.

Wainuiomata
Position 5th:
Points: 15
Big match to come: Round 7 versus Tawa at Lyndhurst Park, for the Chris Stirling Cup – a physical clash that the tight fives will relish.
Prospects: With three wins and two losses, Wainuiomata are well positioned to finish inside the top seven and return to the Jubilee Cup. Bruising matches to come against Tawa, Ories and OBU. They will want to head into the last round against Wellington with points in the bank.

Petone
Position: 6th
Points: 14
Big match to come: Round 6 versus Hutt Old Boys Marist for the McBain Shield – Petone can defend the McBain this weekend and then beat two of their next three opponents, Johnsonville (home), Wellington (away) and Avalon (home) and they are probably in.
Prospects: Will hope two consecutive draws against Norths and MSP don’t come back to haunt them, after a generally positive start to the season. An extra resolve to the Villagers this year, but can hunger alone propel them back to the Jubilee Cup? Mateaki Kafatolu a key player if he plays.

Tawa
Position: 7th equal
Points: 11
Big match to come: Round 7 versus Marist St Pat’s at Lyndhurst Park – always a tight tussle between Tawa and MSP, last home match for Tawa before three away matches to finish.
Prospects: Scoring points not a big issue for Tawa but a slow inconsistent start to the season could come back to haunt them. They need to find consistency then wins and a Jubilee Cup berth could come.

Old Boys University
Position: 7th equal
Points: 11
Big match to come: Round 9 versus Wainuiomata for the Peter Dunford Cup at Nairnville Park – Wainuiomata have beaten OBU the last two years and if this is a must-win it could be a clutch match.
Prospects: Two wins and three losses so far. An injury toll has spread through the Goats squad. Last week they called up three veterans in the forwards. From this point OBU will just be happy to navigate their way into the Jubilee Cup and re-set from there.

Avalon Wolves
Position: 7th equal
Points: 11
Big match to come: Round 8 versus Tawa at Fraser Park – could be a must-win game for the Wolves, and an opponent they have struggled to keep pace with in recent season’s match-ups.
Prospects: Two wins and three losses so far – if the Wolves can win one of their next two games they will be in the hunt for the Jubilee Cup when the pressure goes on at the end of May. Easier said than done – these are both away against Poneke and HOBM.

Marist St Pat’s
Position: 10th
Points: 10
Big match to come: Round 6 versus Old Boys University at Nairnville Park for the Jack Lamason Trophy – a golden opportunity this Saturday for MSP to get back on track against the defending Jubilee Cup champions.
Prospects: Held to a draw and then run down at the death in their last two home matches – Marist St Pat’s needs a shot of confidence. If they go down to the Hardham Cup for the second round then so does their high flying second XV so a worry for both squads.

Upper Hutt Rams
Position: 11th
Points: 9
Big match to come:  Round 7 versus Wainuiomata at William Jones Park – a possible make or break match for the Rams pack that needs to show they can front against the bigger opponents.
Prospects: Can their win over Marist St Pat’s be a catalyst for the Rams? Set-piece remains a worry, but a dangerous opponent for anyone if they break the shackles and keep it positive. Would go to 14 points with bonus point win over Paremata-Plimmerton at Maoribank this Saturday, then it is all on.

Wellington
Position: 12th
Points: 5
Big match to come: Round 9 versus Poneke at Kilbirnie Park for the Spud Lindsay Memorial Trophy – one of the oldest matches in Wellington club rugby and one with plenty of meaning in recent years.
Prospects: It’s the Axemen’s 150th season next year and supporters would love them to go into as an incumbent Jubilee Cup side. Template set with recent win over MSP, but probably need to win four of their next five to be in the mix.

Paremata-Plimmerton
Position: 13th
Points: 4
Big match to come: Round 7 versus Northern United at Jerry Collins Stadium for the Ivan Hargreaves Trophy, little brother against big brother.
Prospects: Hardham Cup bound. But considering that Paremata-Plimmerton started the season without at least a dozen players from last year gone they have done better so far than their position suggests. Genuinely competitive in parts of all their matches and one win, against Johnsonville.

Johnsonville
Position: 14th:
Points: 1
Big match to come: Round 7 v Petone at Helston Park – the Hawks need a giant killing performance and this could be it in a fortnight.
Prospects: The Hawks can definitely rule themselves out of this year’s Jubilee Cup, but need a confidence booster ahead of the Hardham Cup. Where can that come from? Their best chance for a win could at in the last round at home against Avalon. Before that they play Wellington (away), Petone (home), HOBM (home) and the Upper Hutt Rams (away).