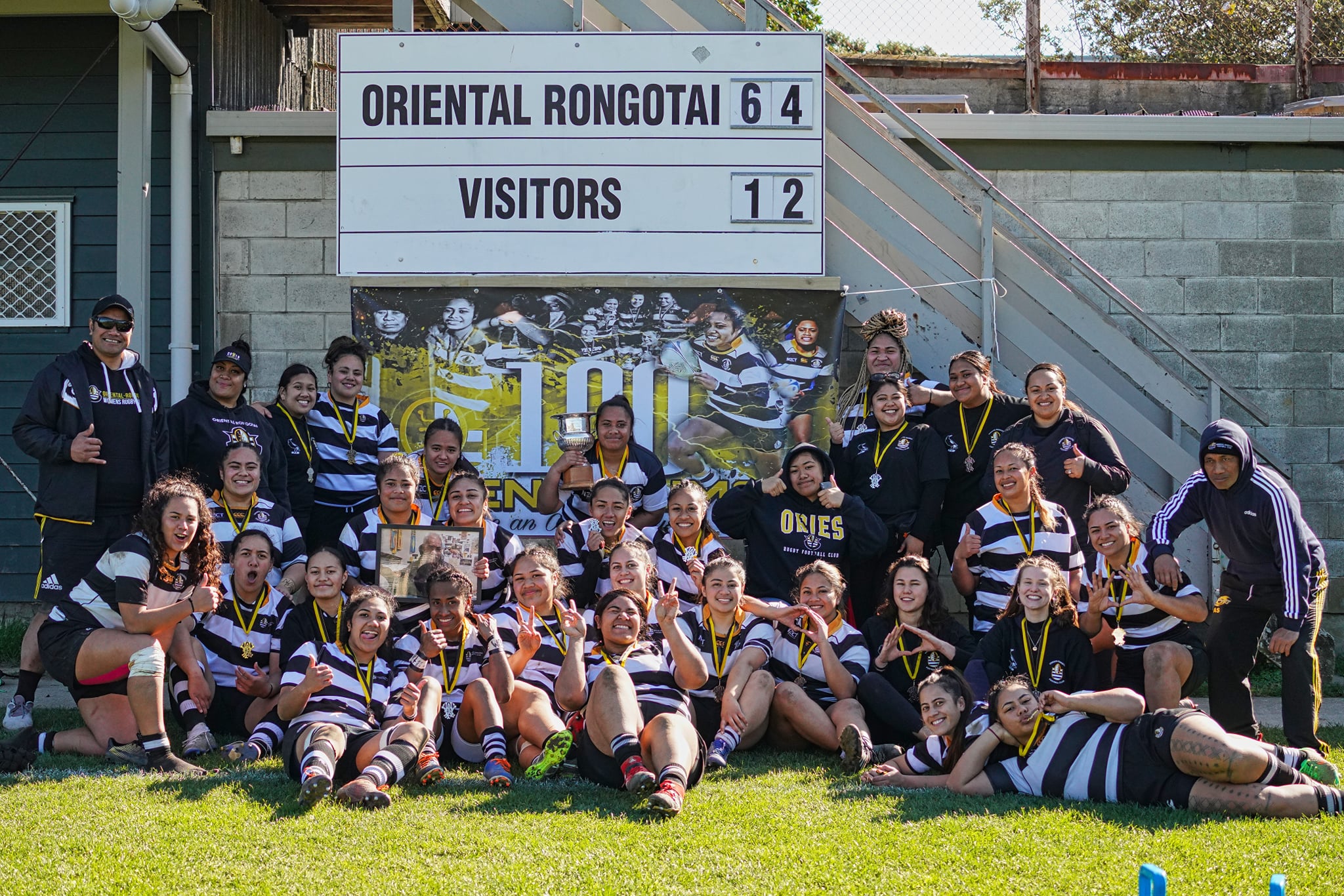 Six teams have a clear break on the field, chasing the four semi-finals spots, after nine rounds of 13 of the 2020 Swindale Shield Premier Men's club rugby competition in Wellington.

Leaders Petone are two points clear at the top and head a chasing group that consists of Old Boys University, Marist St Pats, Northern United, Hutt Old Boys Marist and Tawa, after another high-octane round on Saturday played in fine conditions with few spectators.

The Premier Women's competition has concluded, with defending champions Oriental Rongotai making no race of it in beating Northern United 64-12 in their deciding clash for this year's Rebecca Liua'ana Trophy. Petone got up to finish third, ahead of Marist St Pats and Hutt Old Boys Marist in fourth equal.

The Premier Reserve, Colts, U85kg and Reserve Grade fixtures were all postponed this weekend, owing to COVID-19 Level 2 restrictions.

Swindale Shield pace-setters Petone made the most of the day at the Petone Rec, continuing their strong all-round form in beating the Upper Hutt Rams 58-12. Except for a brief period on the scoreboard midway through the first half when the Rams closed to 11-5 and later in the match when they enjoyed a long spell inside Petone's 22, the home side was in control throughout the match. Petone out-scored the Rams eight tries to two and led 32-5 at halftime.

Fullback Piri Paraone scored the first try of the second half on 50 minutes, followed by a runaway to replacement back Cam Ferreira and the game was in the bag. The Rams stayed in the hunt and were finally rewarded with their second try to flanker Jack Wright, but the in-form Villagers retained the Connolly Cup with two more tries including a long-range runaway at the end to left wing Tailah Love.

Petone meets Old Boys University in this coming weekend's upcoming 10 round meeting at Ian Galloway Park, scene of OBU's 17-0 win over the Wellington Axemen in a game that was called off three minutes into the second half owing to a broken leg to Goats left wing Josh Thomas. An ambulance was called to the scene for Thomas and the game wasn't re-started.

OBU had scored three first half tries, to No. 8 Shamus Hurley-Langton - his tenth try of the season - and to the Plumtree brothers,wing Reece and lock Taine. OBU retained both the Dean Gifford Memorial Cup and Bill Brien Challenge Trophy.

At Evans Bay Park, Marist St Pats were always ahead of Tawa but never comfortably so, going on to win 42-29 in a hotly contested fixture. Second five-eighth James Proctor opened the scoring with the first of his two tries and they scored twice more to lead 21-10 at halftime. Both sides scored converted tries early in the second half and MSP led 28-17 and they maintained their advantage until fulltime. As well as Proctor's double, flanker James Tuiatua, fullback Ryan Setefano and replacement wing Jay Cameron crossed the whitewash. For Tawa, fullback Tom Maiava, midfielder Kalim Kelemete, wing Lua Lualua and front rowers Sitiveni Paongo and Ben Aumua-Peseta crossed the tryline.

Oriental Rongotai‘s 24-18 win over Johnsonville at Helston Park for the Ash Pointon Memorial Cup was the closest margin of victory of the day, with Ories coming back from 13-3 down to trail 17-18 later in the second half. With several minutes to play, replacement back Paulo Aukuso flew through to score the match-winner to keep themselves in the Swindale Shield hunt along with Poneke and Wainuiomata at the front of the chasing pack. For Johnsonville, second five-eighth Ivan Vaisagote scored two tries.

At Jerry Collins Stadium, Norths beat Poneke 55-29. Norths skipped out to decisive 17-0 lead over Poneke in their Cyril Collett Shield clash, with flanker and captain Parekura Lalaga finishing off a big build-up and then from the very next kick-off halfback Esi Komaisavai scoring after a break and kick ahead by No. 8 Luca Rees.

Poneke replied with their first try, but wing Losi Filipo scored a third try for Norths and his 10th for the season to put them ahead 24-5. However, Poneke came back with two more tries including one on halftime to prop George Jacobs to trail just 24-17 at the turnaround. Junior Time Taotua scored the first try of the second spell, but Poneke stayed in touch with No. 8 Cole Stewart’s intercept and 50-metre runaway. Norths introduced TJ Perenara off the bench in the second half, and he scored a try in helping Norths extend their advantage.

At the Hutt Recreation Ground, home side the HOBM Eagles had an equally emphatic victory, beating Wainuiomata 40-10 - again pulling clear in the second half.

The first 40 minutes was tight and willing with both sides scoring tries inside the first 10 minutes and then Wainuiomata second five-eighth Tyler Tane kicking a penalty to add to his earlier try and conversion on the half hour mark to out Wainuiomata ahead 10-5. HOBM then took the lead just before halftime with their second try. Leading 12-10 at halftime, HOBM sailed home with another four second half tries to win well. Fullback Pakai Turia scored a brace and 20 points, while the Manaia brothers, Brett and Rei, scored a try apiece.

Paremata-Plimmerton accounted for the Avalon Wolves 27-12 at Ngatitoa Domain in the other game, between the lower ranked sides.

The home side started strongly and had three tries on the scoreboard right on halftime when wing Zane Ainslie crossed in the corner. Down 22-0, Avalon needed a strong start to the second half and got it when Chris Aumua crossed, before a long period when neither side could take finish off chances they created. Avalon eventually scored from close range, before Pare-Plim put the result beyond doubt – and scored their first four-try bonus in two years – when Clark reeled in a cross-kick from fullback Justin Wilson.


In the Women's decider at the Polo Ground, Norths made the first break of the game through centre Dhys Faleafaga, but Ories regrouped and scored twice through inside backs Amanda Rasch and Fa'asua Makisi to lead 12-0.

The Ories scrum exerted pressure on their opposites and a Rasch intercept try from a defensive Norths put-in put them up 19-0. Norths became the first side to breech the Ories line when flanker Leah Conley scored in the far corner but an Ories tighthead scrum win in the 35th minute near halfway saw centre Ayesha Leti-I'iga burst upfield and create a second try for Makisi. Rasch's conversion made it 26-5, with another try being scored before halftime giving them a 31-5 lead at the turnaround.

There was to be no storming comeback for Norths, with Ories continuing to dominate and  flyhalf Rasch scoring a third try and kicking seven conversions for 29 points. Ories tenth and final try was the last play of the game and was scored by fullback Timena Tumaii celebrating her 100th appearance.

At Ian Galloway Park, Petone beat the OBU Impalas 50-19, with the Ponies winning eight tries to three and halfback Milly Mackey scoring a hat-trick and 25 points.

At Evans Bay Park, Marist St Pats finished their season on a high with a 72-20 win over neighbours Poneke. MSP won 12 tries to four, with right wing and captain Monica Tagoai scoring a hat-trick and nine other individuals crossing the chalk.

At Ngati Toa Domain, Paremata-Plimmerton beat Avalon 43-36 in a high scoring match, while HOBM had the bye.