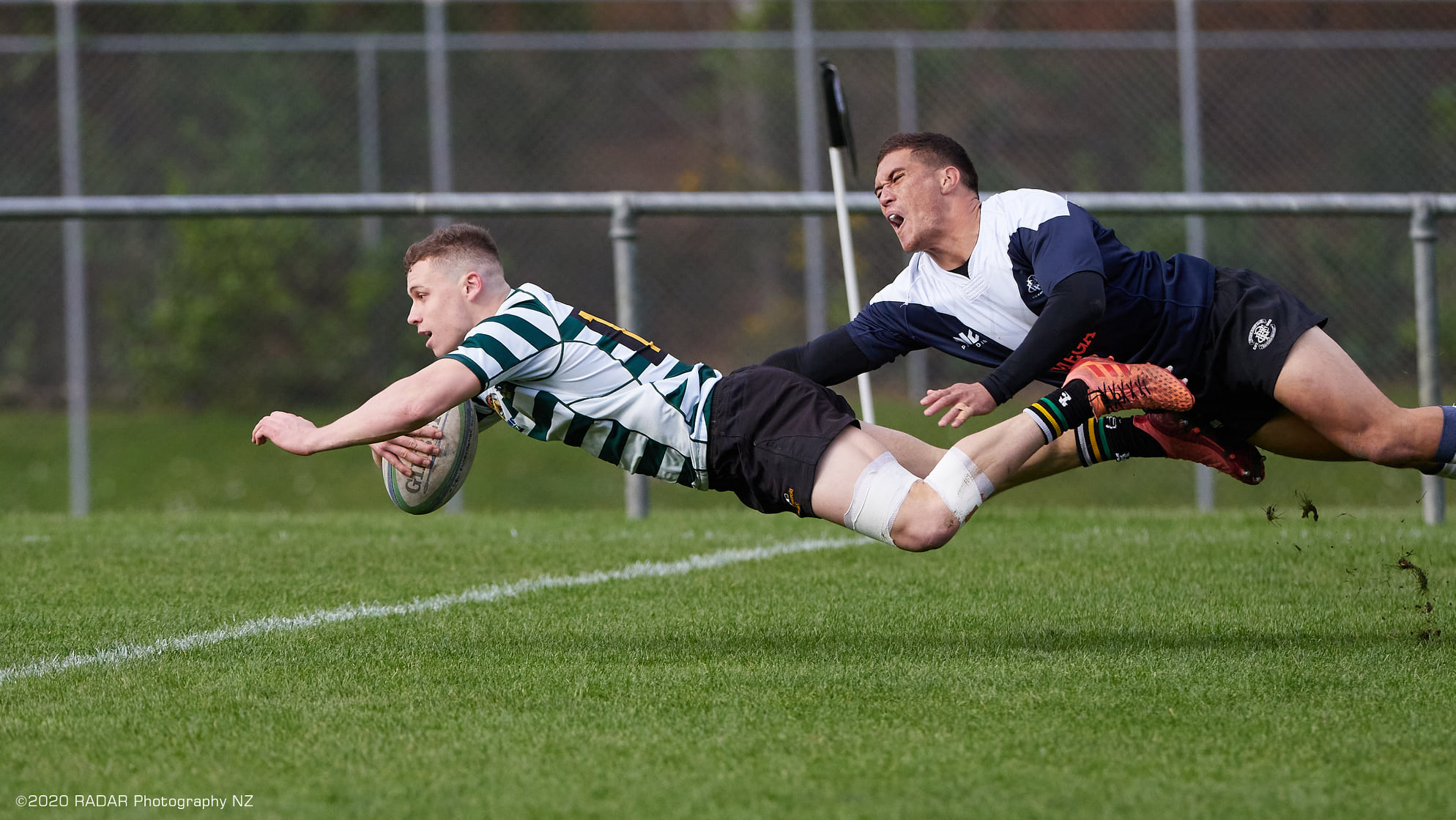 The Old Boys University Goats have traded places with Petone at the top of the Premier Swindale Shield points table, courtesy of their late win over them on Saturday in their top-of-the-table clash at Porirua Park.

The Goats came from behind with a 78th minute penalty from 41 metres out to first five-eighth Callum Harkin and then a match-sealing try on fulltime to win 30-23 over Petone to move them to 42 competition points and with tricky games to come against Hutt Old Boys Marist, Wainuiomata and Oriental Rongotai to come to conclude their first round campaign.

Petone are joint second with Marist St Pats on 40 points, who overran Poneke 50-18 at Kilbirnie Park, ahead of defending Jubilee Cup champions Northern United a point back on 39, after they powered past Paremata-Plimmerton 92-5 at Ngati Toa Domain.

Tawa (35) have leapfrogged Hutt Old Boys Marist (32) into fifth, following their 56-0 win over the Wellington Axemen at Lyndhurst Park and HOBM's heart-breaking 24-25 last-gasp loss to the Upper Hutt Rams at Maidstone Park.

Poneke are ninth on 21 points, followed by the Rams on 20, Paremata-Plimmerton 13, Wellington 11, Johnsonville 4 and Avalon 2.

Saturday's rugby was played in fine, breezy conditions throughout the region for the second successive weekend owing to the Covid-19 Level 2 restrictions.

Petone led 13-12 at halftime, despite two first half tries to OBU fullback Sam Reid. Petone halfback Logan Henry opened the scoring with two penalties to put his side up 6-0, before Reid scored the first try of the match. Petone moved ahead 13-5 when No. 8 Tupou Sopoaga scored from close range, before Reid bagged his brace at the end of the half after a strong scrum and burst by second five Izzy Foai.

The Goats scored the first try of the second half from a lineout drive. Petone replied through right wing Tom Carter after a weaving run by centre Willie Fine. OBU kicked a penalty to lead 22-18, before Petone scored again, through Henry, to take one-point lead heading towards fulltime but Sopoaga they were unable to hold on as Harkin kicked a penalty and then blindside flanker Caleb Delany surged up field from the next re-start leading to a try in the far corner. OBU retained the Bill Brien Trophy and Marc Verhoeven Memorial Trophy.

Marist St Pats pulled away from Poneke to win 50-18, after leading 31-18 at halftime after two first half tries to second five-eighth Isaia Petelo. Best and Fairest leader Aidan Morgan scored a long-range intercept try to put MSP up 38-18 early in the second half, followed by two more tries to seal the win and the Horan-Millar Trophy.  For MSP, Petelo and hooker Tyrone Thompson scored four of their eighth tries, while Morgan also kicked five conversions. MSP won the Horan-Millar Trophy.

Northern United weathered an early period of attack from home team Paremata-Plimmerton before hitting their stride and eventually running in 14 tries in the biggest win of the afternoon. The Norths forwards got on top, particularly at scrum time, laying the platform for their backs to light up Ngati Toa Domain. As soon as they got on the outside of Paremata-Plimmerton opposites, it meant danger. Norths would take a 38-0 lead at halftime and then, with Hurricanes flyhalf Jackson Garden-Bachop on board in the second half, they more than doubled this.

Down the motorway at Lyndhurst Park, Tawa were dominant over the Wellington Axemen in their win for the Murray and Alan Mexted Cup. Tawa scored 10 unanswered tries against the Axemen, with Wellington Lions wing Pepesana Patafilo scoring a hat-trick in his first match of the season.

Ories were similarly dominant in beating the Avalon Wolves 12 tries to nil at home at Miramar, with replacement outside back Reuben Va'a crossing for a hat-trick, centre Ethan Webster-Nonu and openside flanker John Tuia both scoring two tries. Ories only kicked three conversions, so the score could have been higher on another day.

Johnsonville started the second half brightly, leading to a try to fullback Niall Delahunt. But Wainuiomata closed matters out with a fourth try, and extended matters with a late brace to Eden Monu that blew out the scoreline.

The Rams scored their match-winner over the HOBM Eagles through blindside wing Hokianga Morunga and fullback Scott Svenson slotted the sideline conversion.

The Eagles had dominated much of the early part of the game, but the tenacious Rams held on to keep in touch. The Eagles were left to rue a lack of discipline in the second half as they led 17-15 deep into the game. The Rams kicked a penalty to move ahead 18-17, before HOBM prop Brett Manaia scored what was seemingly the winning try, before a series of pick and goes led to the winning try.


Status quo at the top of the Harper Lock Shield Premier Reserve competition.

Leaders and unbeaten Norths ran out 67-8 winners over midtable Paremata-Plimmerton, after leading 26-3 at halftime, while second placed MSP were emphatic in seeing off neighbours Poneke 54-10.

Petone Blue moved up to third after a hard-fought 13-11 win over OBU, while Tawa was untroubled with a 93-0 win over the Petone Brotherhood. Ories were also big winners seeing off Avalon 77-22, Johnsonville won an entertaining match 29-14 over Wainuiomata, and HOBM kept the pressure on the top four with a 29-13 over Stokes Valley in the only late game.

In the Paris Memorial Trophy Colts competition, defending champions and leaders OBU Green beat Petone 45-12, to open up an 11-point lead over Petone at the top of the standings after eight completed rounds.


Like in the Premier Reserve competition, there is now a three-way tie for third place behind OBU and Petone after yesterday's results, with both Norths teams and HOBM currently vying for the other two semi-final spots.

Norths Blue took a 36-24 win over the Norths White on Friday night, while HOBM Green beat the Upper Hutt Rams in a second match on Friday under lights at Maidstone Park. In one other Colts encounter OBU Black beat Johnsonville 57-15, whilst the Poneke Colts took the points from their win over Wellington by default and Tawa had the bye.