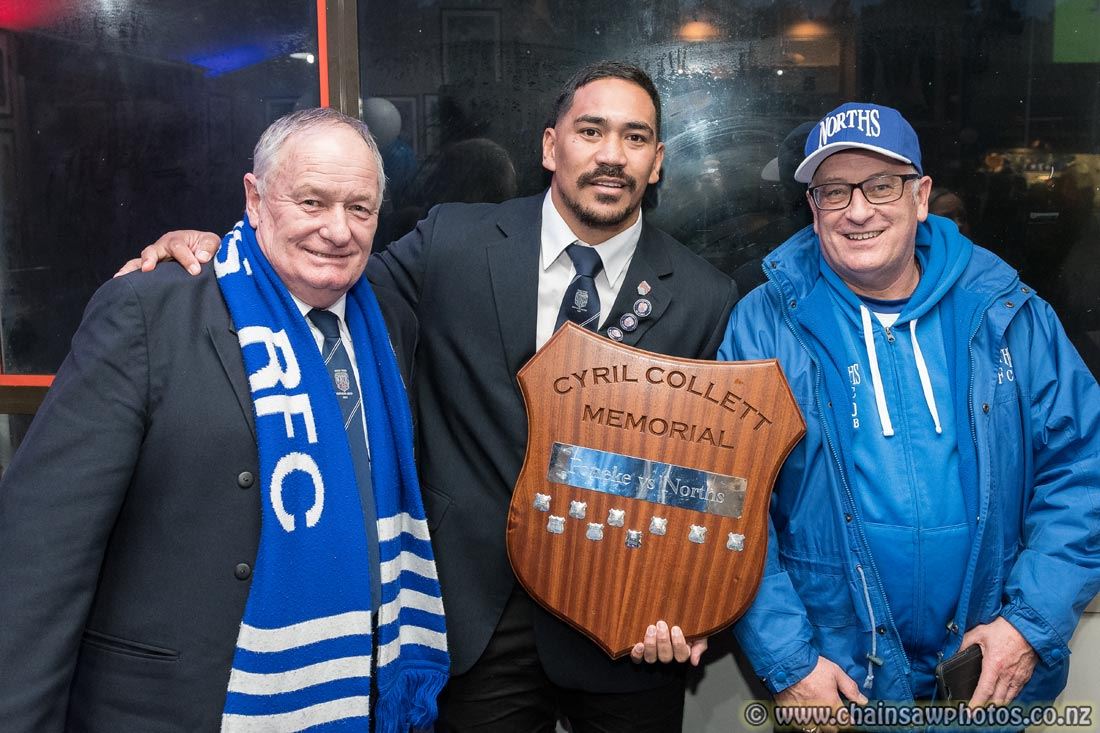 Predicted wet weather rolled in right on cue to usher in the start of the second round Jubilee and Hardham Cup Championship rounds of Wellington club rugby on Saturday.

The change in conditions also saw a series of close matches around the region, with four of the six matches won without four-try bonus points and all willing contests and a lift in intensity.

In the Jubilee Cup, Northern United, Tawa and Wainuiomata won their matches, while Old Boys University, Marist St Pats and the Upper Hutt Rams prevailed in the Hardham Cup competition. First round champions Hutt Old Boys Marist (Jubilee Cup) and the Avalon Wolves (Hardham Cup) had the opening round byes.

It was Old Timers' Day at Porirua Park and the home side Norths also had the services of Hurricanes squad member Jackson Garden-Bachop at first five-eighth. Garden-Bachop was a key figure in Northern United's 26-0 win over Poneke, kicking 16 points. Wing Junior Time Taotua and replacement outside back Salio Siaunuua scored tries. Norths led 13-0 at halftime. They also won the Cyril Collett Memorial Shield off Poneke.

At Lyndhurst Park, Tawa reversed their first round defeat to Petone at the same venue with a hard-fought 24-17 win over them. Petone scored the game's first two tries, through No. 8 Tupou Sopoaga (an intercept) and left wing Adam Simpson, but Tawa came back with two tries from forwards exchanges to cut their lead to 14-17 at the break. There was no scoring until deep into the second half and it was Tawa that struck next through a rolling maul to go ahead 21-17. Late in the match replacement first five-eighth Sam Clarke landed a long-range penalty to seal victory for the 2013 and 2016 champions.

At the Polo Ground, visitors Wainuiomata came back from a 7-12 halftime deficit to beat Oriental-Rongotai 21-12. Wainuiomata scored first through WRFU Academy flanker Sam Smith, but Ories replied with a double to midfielder Alex Ropeti.

With rain and wind settling in over the penisuala, Ories spent the first part of the second half camped inside Wainuiomata's territory in front of the clubrooms, but failed to break through. Instead it was Wainuiomata that weathered the storm and wrestled control to score two tries of their own to win their fifth straight match.

Old Boys University tighthead prop Jonathan Fuimoano was playing his 150th match at Nairnville Park and he was one of five try-scorers in his team's 34-17 win over the Wellington Axemen. Loosehead prop Morgan Poi also scored a try, while No. 8 Teariki Ben Nicholas scored two. For Wellington, loose forwards Max Allen and Xavier Smith and right wing Ollie Marshall were their three try-scorers.

At Helston Park, the Upper Hutt Rams took a 14-0 lead into halftime against the Johnsonville Hawks, through tries to hard-working midfielder Konolio Feaunati and debutant openside flanker Josh Southall.

Johnsonville cut their lead in the second half to 14-8 with a try out wide and then a penalty. The Rams pulled ahead with a third converted try, to left wing Jayden Treviranus, before the Hawks scored late through first five-eighth Jacob Walmsley. The final score was 21-15 to the Rams.

In the Premier Reserve division, Petone beat Tawa 24-17, the same score of the Premier match only reversed, while Norths beat Poneke 37-27 and Ories beat Wainuiomata 52-19 in the Ed Chaney Cup.

Stokes Valley celebrated their Old Timers’ Day and 70th anniversary with a 25-17 win over OBU in their Thompson Memorial Trophy First Grade match.

There was a notable result in the opening round of the Colts Division One John E Kelly Cup competition. First round winners and defending champions OBU Green lost for the first time all season, going down to Ories 21-26.

Newly promoted Ories, were good for their 19-7 halftime lead, scoring three well constructed tries and also defending strongly against a shellshocked OBU unit who went to work on them at scrumtime but met their match in the phycialtiy contest around the field.

With rain starting to fall in the second half, the Junior Goats hit back with their next try but Ories regrouped and after a concerted spell inside OBU’s 22, scored again to extend their lead to 26-14. OBU scored again at the end but this was of consolation value only. Ories were also presented with the first round Division 2 cup at the end.

Several other grades, including Women's and U85kg, had this Queen's Birthday Weekend off and their competitions will resume next Saturday.