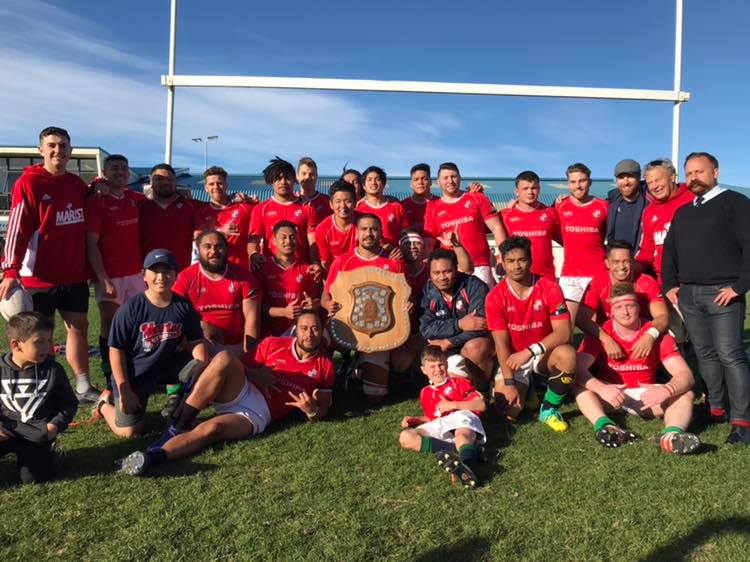 Win, lose or draw, Hutt Old Boys Marist will be presented with the 2019 Swindale Shield at the conclusion of their 10th and final round match against Northern United next Saturday.

The Eagles beat Oriental-Rongotai with a bonus point and Marist St Pats beat Northern United to give HOBM a 9-point buffer at the top of the standings to second placed Norths who have also qualified for the Jubilee Cup.

But there are still seven teams chasing the other five spots for the championship round heading into the final set of matches. Ories and Poneke are third equal and should be safe, but below them are Petone, Wainuiomata, Tawa, MSP and OBU. The most likely scenario is that these teams will be chasing three spots between them.

Meanwhile, the Marist St Pats 2nd XV won the Premier Reserve Harper Lock Shield competition with a week to spare. They did so in style, beating second placed Northern United 53-12 in what was a top-of-the-table clash at Evans Bay Park.

On another fine late autumn afternoon, the scoring ran hot at five of the seven venues, with 483 points scored in the Swindale Shield.

Several teams were fast out of the blocks, and had built match-winning leads by halftime.

The Eagles beat Ories 41-31, after racing to a 31-7 lead by halftime. Playing with the help of a dying northerly, they scored three tries and kicked a penalty to lead 24-0. This lead somewhat belied the run of play, with Ories in the game for long periods but HOBM were able to turn a smothering first half defensive effort into points.

Ories finally scored their first try moments after HOBM halfback Sheridan Rangihuna was sin-binned, but they then stunned the Magpies on halftime when Hurricanes left wing Salesi Rayasi ran back a kick, linked with his teammates and scored his second try in the corner. First five-eighth Glen Walters converted from the sideline and it was game over.

Or was it? Ories hit back straightaway in the second half with a try to centre Malachai Unasa, but HOBM scored a vital fifth try to midfielder Francis Tunavasa. Ories replied through wing Reuben Va’a but a Rangihuna penalty put them up 41-26 and a consolation try to Ories was all they could add from there as HOBM also won the Bondy Memorial Cup.

At Evans Bay Park, home team Marist St Pats lit up their Old Timers’ Day with an emphatic 48-31 Maurice Standish Cup win over Norths. MSP’s forwards came out with energy and vigour and helped them blast to a 31-0 lead by halftime.

MSP scored four first half tries, including a brace to win Faresa Tasale. Norths injected Hurricanes pivot Jackson Garden-Bachop into the contest in the second spell, and like Ories, Norths hit back with a rush of scoring themselves. But MSP’s lead was too great and they kept their season alive for another week at least.

It was also Old Timers’ Day across the road at Kilbirnie Park where the home team Poneke retained the Spud Lindsday Memorial Trophy with an emphatic 60-7 win over the Wellington Axemen.

Poneke raced to a 36-0 lead at halftime playing into the wind and kept their pace up in the second half. Left wing Nick Robertson scored a hat-trick and first five-eighth Pakai Turia scored two tries.

At the Petone Recreation Ground, the home team also kept themselves firmly in the race for the Jubilee Cup with a commanding 90-5 win over the Avalon Wolves. Willie Fine, operating on the right wing, scored four tries and No. 8 Tupou Sopoaga continued his bustling form with a hat-trick. Petone scored 15 tries, after leading 45-0 at halftime.

At Ngatitoa Domain, Tawa also enjoyed the sun on their backs, beating Paremata-Plimmerton 67-7. Tawa scored six first half tries and led 40-0 at halftime. They led 26-0 after 20 minutes.

The other two matches were closer – and the contest at Nairnville Park could have ramifications on the top seven for last year’s Jubilee Cup champions Old Boys University.

At Nairnville Park, OBU battled to a 21-13 lead late in the fixture, only for Wainuiomata to come storming back with a converted try to second five-eighth Peter Umaga-Jensen. Fullback Josh Robertson-Weepu then slotted a late penalty to give them a 23-21 win over the Goats.

Wainuiomata had started the Peter Dunford Cup contest with an early try to halfback TJ Va’a and a Robertson-Weepu penalty for a 10-0 lead. OBU came back with tries to No. 8 Teariki Ben Nicholas, lock Caleb Delany and replacement halfback Matt Fowler but couldn’t hold off the green and black tide at the end.

At Maoribank Park, the Upper Hutt Rams scored three quickfire tries early in the second half to see off  the challenge of the Johnsonville Hawks 34-17.

The Rams scored early, but Johnsonville crossed through right wing Rohan Rawlings. Hooker Eli Hunt scored next for the Rams to put them up 12-5 at halftime. For the Rams, Hunt and left wing Jayden Treviranus each scored two tries, while flanker Daniel Schijvers also scored in this 50th game.

In Harper Lock Shield matches, MSP toppled Norths 53-12 to win the first round title (see above), while Tawa joined Norths in second equal after they beat Paremata-Plimmerton 63-7.

On Friday night, the Oriental-Rongotai Women’s team beat Northern United 28-20 in their top-of-the-table Women’s Rebecca Liua’ana Trophy match. The come-from-behind win for Ories all-but seals the first round title for them with a round to play.

In a tough match, fiercely contested at the breakdowns, Ories led 7-5 at halftime, courtesy of a late first half try to captain and No. 8 Joanah Ngan-Woo versus an early strike to Norths hooker Patsy Schwalger.

Norths went ahead 15-7 after halftime with well-created tries to right wing Harmony Ioane and fullback Julie Tusa, but neither were converted. Ories struck back with tries to Ngan-Woo (her second) and centre Amanda Rasch and then sealed the win at the end through left wing Ayesha Leti-L’iga,

In the only other Women’s match that was played this weekend, MSP beat HOBM 27-17. The Paremata-Plimmerton versus Wainuiomata/Avalon fixture has been rescheduled to Tuesday night, while Poneke defaulted to Petone and the OBU Impalas had the bye.

In the Colts Division 1 Paris Memorial Trophy, the OBU Green Colts confirmed their favourtism to go on and win next week and win the first round by beating the Upper Hutt Rams Colts 95-0.

Second placed MSP beat HOBM 50-10, Paremata-Plimmerton seemingly kept themsevles in the top flight with a 37-14 win over Tawa, while Norths edged Petone 22-21 in a thriller.

In Colts Division 2, confirmed JRD Cup first round winners Oriental-Rongotai strode to a 85-0 win over Avalon, OBU Black beat Wainuiomata 41-7 and Poneke beat the Wellington Axemen Colts 43-22 in their match for the Misiluni Moananu Memorial Shield.

Then there was one in the U85kg JC Bowl, with the Avalon Wolves the only unbeaten team after six rounds following their 29-19 win over Wests and the Upper Hutt Ram’s 3-7 defeat to Wellington.

MSP beat the OBU Scallywags outfit 36-24, Eastbourne beat Paraparaumu 36-26 and HOBM got up to beat Wellington 15-10.

Stokes Valley made it four straight wins in the First Grade Thompson Memorial Cup with a 33-29 win over the Avalon Knights today. Elswwhere in this grade, defending champions the HOBM Barbarians beat OBU 57-31.