MSP on top, as wins for HOBM and Tawa keep race tight for the top four 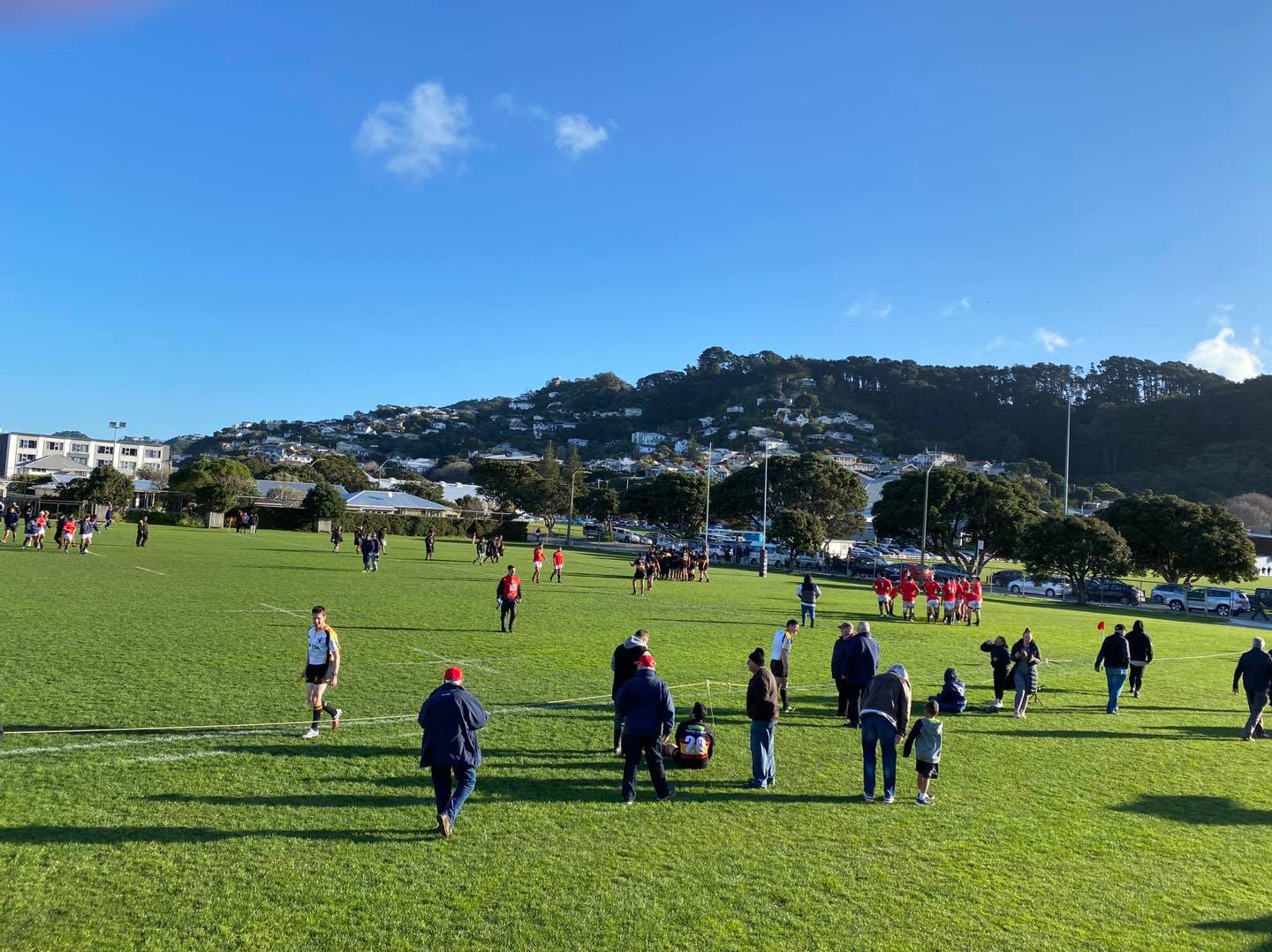 Marist St Pats have surged to the top of the Premier Swindale Shield standings with two rounds to play, following their 75-0 win over Paremata-Plimmerton at Evans Bay Park on Saturday, while Hutt Old Boys Marist and Tawa both won tight matches to keep themselves in the hunt for the top four and - mathematically at least - the title.

HOBM beat last week’s leaders Old Boys University 21-17 with a try at the death at the Hutt Rec, while Tawa held on to beat Petone 31-26 down the road at the Petone Rec.

Northern United won their ninth match in a row in holding off Oriental Rongotai 38-14 at the Polo Ground.

There are six teams still in the race for both the top four semi-final positions to contest the Jubilee Cup and the first round Swindale Shield title spoils.

MSP play lower ranked Johnsonville and the Wellington Axemen respectively over the final two weekends of the round-robin season, putting them in the box seat to win the first round.

Of the other eight teams who will be contesting the Hardham Cup this year, these are headed by Wainuiomata on 29 points, followed by Ories 26, Poneke 26, Upper Hutt Rams 20, Paremata-Plimmerton 13, Wellington 11, Johnsonville 9 and Avalon 2.

In other results on Saturday, Johnsonville grabbed their first win of the season in beating the Avalon Wolves 38-12, while Wainuiomata beat the Upper Hutt Rams 29-19 and Poneke beat the Wellington Axemen 38-7.

Around the grounds, MSPs victory over an under-strength Paremata-Plimmerton side was assured inside 15 minutes when they had run in their fourth and bonus point try to lead 22-0. Prop Meinrad Fitsemanu scored from the opening kick-off and MSP went on to score 13 tries, with fullback Andrew Wells and second five Isaia Petelo both scoring hat-tricks.

Over in Miramar, Norths reclaimed the To'omaga Alex Iona Memorial Cup with a six tries to two win. After absorbing early Ories pressure, Norths opened the scoring through a try to Lions wing Connor Garden-Bachop. His brother and pivot Jackson collected a spilt ball and scored the second try to put them up 12-0. Ories fullback Tuga Mativa finished off a length of the field try, but Norths lock Waylon Baker scored to give Norths a 19-7 halftime lead.

Right wing Losi Filipo scored his 13th try of the season, off an attacking scrum, followed by tries to flanker and captain Parekura Lalaga and No. 8 Luca Rees dotting down against his former teammates. Ories scored their second try through centre Ethan Webster-Nonu.

There were four Swindale Shield matches in the Hutt Valley on Saturday, with wins for the visiting team in three of these fixtures.

Johnsonville first five Mark Sutton and left wing Andrew Ellis scored braces in their side’s convincing win over the Avalon Wolves on the Fraser Park Artificial. This was Johnsonville’s first win in over two years and keeps Avalon rooted at the foot of the table and winless in 2020.

Wainuiomata beat the Upper Hutt Rams 29-19 at Maidstone Park to win the interclub Peter Jones/Dave Ritchie Cup. Wainuiomata built on a fast start that saw tries to first five TJ Va’a and No. 8 Teru Time giving them a 12-0 lead. Prop Anthony Mamea crossed for a third try to put them up 19-0, before the Rams got on the board with their opening score. Wainuiomata fullback Josh Robertson-Weepu added a penalty to put them up 22-7 at halftime.

Wainuiomata scored their fourth and bonus point try straight after halftime through replacement back John Monu, putting them up 29-7. The Rams scored two more tries but couldn’t close the deficit.

At the Hutt Rec, HOBM won the Wood Cup off Old Boys University with a dramatic late try to halfback Connor Collins, who darted through from close range to score from a ruck after a desperate build-up inside OBU’s 22.

OBU thought they had the match won several minutes earlier when first five-eighth Callum Harkin scored after a concerted build-up and gathering momentum with the wind at their backs. OBU were now ahead 17-14, after coming back from 5-14 at halftime and left wing Ty Poe scoring their first try of the second half.

OBU had scored the game’s first try through Lions centre Wes Goosen, but Goosen departed the field injured after this try, forcing positional changes. The Eagles built phases inside the 22 and hit back through prop Rei Manaia and then doubled their lead to 14-5 at halftime when second five Brandyn Laursen burst on to a Manaia pass following an attacking lineout on the 22 and made a beeline to the tryline.

Petone halfback Logan Henry started their match against Tawa by kicking two consecutive penalties. Tawa replied for the first try when centre Tom Maiava got on the outside of his markers and offloaded to right wing Romu Senileba.

Tawa then scored two emphatic tries to lead 25-11 lead at halftime, the first to loosehead prop James Coburn and the second an intercept on the far side in general play and runaway to Lions left wing Pepesana Patafilo.

Now playing into the wind, Renata extended Tawa’s lead to 28-11 with a penalty, but Petone’s Henry replied to make it 28-14. Petone and Lions prop Pasi Uluilakepa scored from close range to make it 28-19, before another Renata penalty made it 31-19 to Tawa. Petone scored another converted try with a few minutes to play to set up a grandstand finish, finishing the match camped on Tawa’s tryline.

Harper Lock Shield leaders Northern United beat Ories 43-12 in their Premier Reserve fixture, with Liki Siliga and Esi Komaisavai each scoring two tries in the Polo Ground curtain-raiser. Norths have booked a home semi-final in this grade, but winning the competition is not guaranteed yet with second placed MSP taking five points by beating Paremata-Plimmerton by default.

The Petone Premier Reserves pipped their Tawa counterparts on fulltime, halfback Blake Ford kicking a penalty with the last play of the game to see them win 25-24.

Petone came home strongly in the second half with the wind at their backs, scoring two tries and then the penalty over the final quarter after Tawa had taken a 24-12 lead into halftime courtesy of an intercept and 70 metre runaway try just before halftime.

OBU Green had the bye and lead the standings by seven points to second placed Norths Blue, third placed Petone and three teams locked up in fourth.

There was a tight finish to the regular season competition on Saturday to decide the other three semi-finalists, with Eastbourne getting up to qualify second courtesy of their 36-19 win over Poneke and the OBU Scallywags beating Wellington Axemen 33-27 in a pivotal result that pushed the Axemen out of the Paul Potiki Memorial Shield semis.

The Rams finished top on 38 points, followed by Eastbourne on 28, OBU on 25 and Avalon and Wellington equal on 24, with Avalon qualifying for a Paul Potiki Memorial Shield semi-final as they won their head-to-head 32-10 in the third round.

Meanwhile, MSP got up to finish sixth by beating HOBM 27-10 in this weekend’s other U85kg match. Wests had the bye.

Next week’s Paul Potiki Memorial Shield semi-finals will see the Rams hosting Avalon in a replay of their match on Friday night and Eastbourne hosting third placed OBU beside the sea.

In a top-of-the-table battle of the unbeaten teams in the Reserve Grade Mike Copeland Trophy, the Ories Vatos beat the Upper Hutt Rams J8s 15-12.

In other results, the Paremata-Plimmerton Punters had a 59-24 win over the UH Thirsty Rams, while all five other games were close affairs. The OBU Righteous Pack beat the OBU 69ers 24-22, Stokes Valley beat the OBU Pink Ginners 31-22, the Poneke Ruffnuts defeated the MSP Internationals 36-27, Wests beat Wellington 36-27 and the UH Pirates beat the OBU Teddy Bears 17-15.