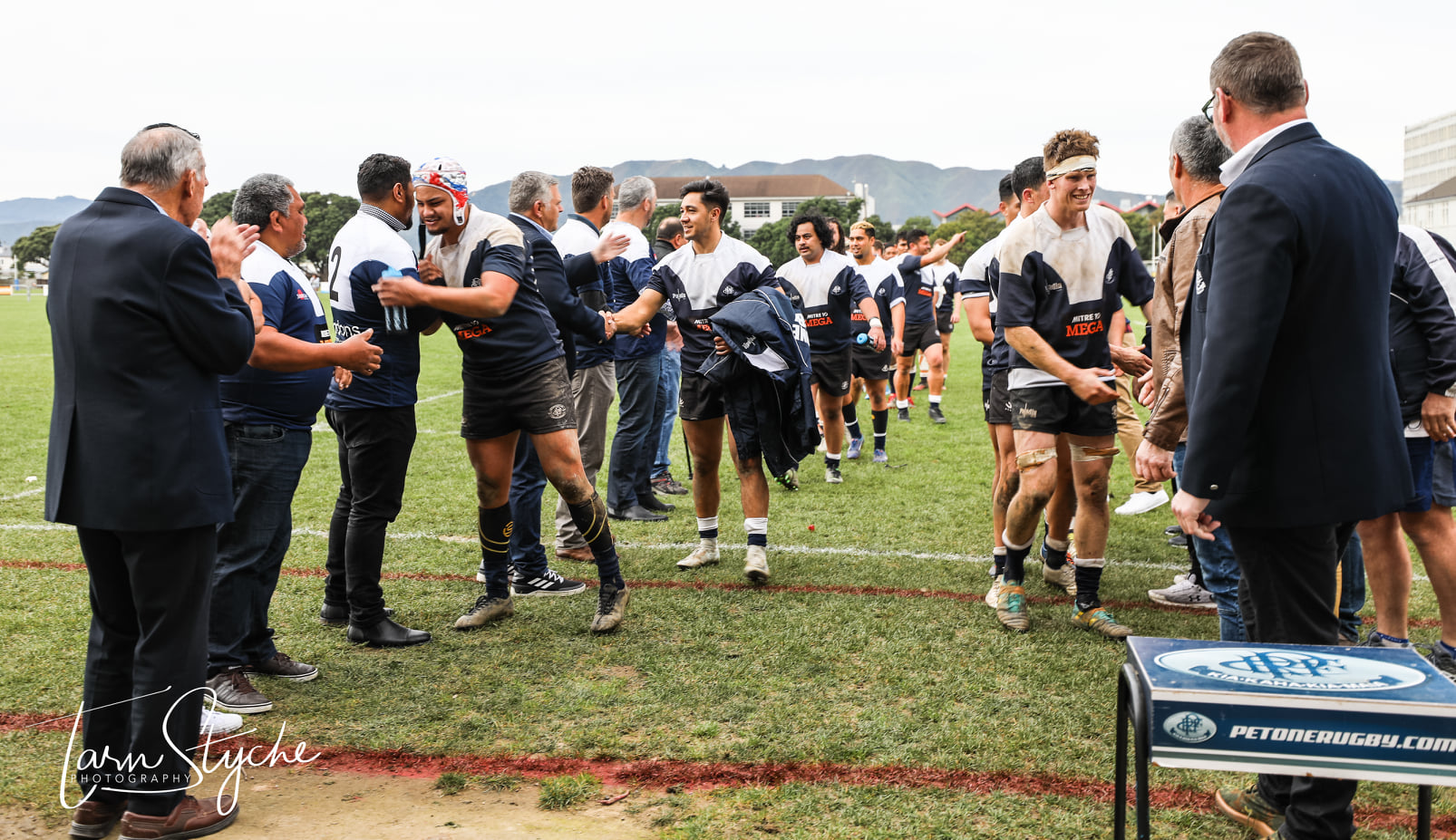 Marist St Pats and Petone top the Swindale Shield standings after seven rounds of the first round Premier competition.

Both sides won well this weekend, but in contrasting circumstances, MSP accounting for the Avalon Wolves under lights on Friday night 92-14 and Petone rallying in the second half to hold off Oriental-Rongotai 34-30.

MSP and Petone are joint leaders on 29 points, closely followed by Old Boys University who powered past Tawa 27-9. All three teams have six wins from seven matches played.

There is then a gap back to Ories, Poneke and the Upper Hutt Rams, all on 16, after the Rams beat Poneke 15-10.

Wainuiomata are on 14, followed by Wellington on 11 who defeated Johnsonville 13-10. At the foot of the table, the Hawks and Avalon are the two winless teams.

Leaders MSP opened the round on Friday night against Avalon by scoring an even seven tries in each half of play.

Second five-eighth Isaia Petelo was to score two first half long range tries before halftime and he set up another under the posts, while left wing Faresa Tasele also crossed the line at least twice.

MSP reclaimed the Joe Aspell Cup off Avalon, who had won it when they last met in 2018.

At Petone, the home team beat OrientalcRongotai 34-30 on their Old Timers’ Day for the Jim Brown Memorial Trophy, a much closer scoreline but no less emphatic victory.

Jim Brown was a midfield back and All Black trialist in the 1970s, but it was Petone’s well-drilled and hungry forwards who were key in this victory.

With lock and captain Tuakana Metarau playing his 100th Premier match for the visitors, Ories brought a high-energy game to the contest and had the better of the first half. But for all they threw at them, Petone came out leading 17-13 at halftime.

Both sides traded early penalties, before Petone opened the try scoring to blindside flanker Iona Apineru after going wide from an attacking scrum.

Ories left wing Steven Va’a scored a spectacular try from the next kick-off, followed by Hurricanes prop Alex Fidow crossing to put them up 13-10.

Ories created several more chances over the next 20 minutes, but Petone held them out. Then, on the stroke of halftime, Petone scored through halfback Logan Henry from a 5-metre scrum.

The second half started at similar breakneck speed, but it was Petone who scored again after moving the ball wide to centre Tom Carter who linked up with right wing Willie Fine to score in the corner.

Ories hit back through Jason Seumanufagai and it was 22-20 to Petone with 20 minutes to play.

Petone’s forwards rallied and they scored the game’s next two tries to take the game away from Ories, both coming from lineout drives and tight-head Kaliopasi Uluilakepa coming up with the match-clincher.

Ories kept attacking to the end and replacement halfback Sean Hay sped through to score in the corner to score a try that saw Ories take 2 bonus points from their loss.

At Lyndhurst Park, the Old Boys University Goats absorbed plenty of early pressure before pulling clear of home side Tawa to win 27-9.

The Goats then scored the first of their three tries, to lock Taine Plumtree, and they went on to lead 13-9 at halftime.

Fullback Sam Reid scored their next try early in the second half, converted from out wide by first five-eighth Dale Sabbagh, to extend their lead to 20-9.

OBU’s lineout drive set the winning try in motion, N. 8 Shamus Hurley-Langton coming up with the forwards try to end the scoring.

The Hutt Old Boys Marist Eagles were eager for a big performance after recent losses and they achieved this at Ngati Toa Domain by beating Paremata-Plimmerton 76-21.

At Maidstone Park, the Upper Hutt Rams beat Poneke 15-10 in a close match throughout. The Rams won two tries to one, with centre Daniel Schijvers and halfback Kaide McCashin finding the whitewash.

It was Old Timers’ Day at Helston Park, where visitors the Wellington Axemen beat home side Johnsonville 13-10.

In a tight match, Johnsonville had their chances to snap their losing streak, but these went begging.

Wellington opened the scoring with a Matt Goosen penalty, but Johnsonville was the more threatening with ball in hand and a break down the left-wing side saw play switched swiftly to the opposite wing where the Johnsonville forwards scored the try.

The second half remained tight. Goosen missed two penalties for the Axemen, but Stephen Nelson leveled the scores with about eight minutes remaining. But when Johnsonville was isolated in their 22, Goosen reclaimed advantage for the Axemen.

By far the closest result of the afternoon was OBU’s 32-30 win over Tawa, while Petone’s top team beat Ories 37-27 in another close-run encounter.

The Petone Rec curtain-raiser saw Petone extend their 15-10 halftime lead to 25-10, before a two-try comeback by Ories cut their lead to 25-20 and then Petone pulling clear again towards the end.

It was Gala Day at Fraser Park in the Premier Women’s competition, with all four games played concurrently.

On the two far fields, there were comfortable wins for competition frontrunners Oriental Rongotai and Northern United, to confirm that these two teams will be playing each other in a ‘virtual’ final in a fortnight’s time.

Petone scored the first try against Norths through blindside flanker Alice Soper, but conceded the next 14, including five to cetnre Dhys Faleafaga and a hat-trick to centre Kolora Lomani. Norths won 84-5.

Ayesha Leti-I’iga, in a new position of centre, scored her hat-trick in the first 10 minutes as Ories burst through early, scoring some seven tries in the opening 30 minutes. Leti-I’iga would score eight of 14 tries for her team.

It was much closer, however, on the No. 1 grass field in front of the pavilion between home side Avalon and Hutt Old Boys Marist.

Both sides threw plenty at the other, but it remained 0-0 at halftime. The second half was a similar pattern of play, before HOBM finally broke through the half with their first try to first five Suzanne Yee to go up 5-0. Finally, at the end of the game, fullback Tyler Bentley doubled the score to 10-0 with a try out wide.

On the other side of the complex on the artificial field, OBU centre Thamsyn Newton scored all her side’s 26 points against Marist St Pats, including four tries, but the red tide scored 51 points of their own and won 51-26.

Other Colts results saw Norths White continue their top form in beating OBU Black 55-10 in the battle of the second XVs, the Upper Hutt Rams beat Poneke 38-21 and the Tawa Colts overcome the Wellington Axemen Colts 102-7.

In the U85kg JC Bowl, there was a 3-0 win for defending champions Avalon over the HOBM Howlers and the Upper Hutt Rams made it five straight bonus point wins with their 24-0 win over Wellington.

Eastbourne beat Marist St Pats 43-20 and the OBU Scallywags took a 73-12 win over the Wests Roosters.

In the Reserve Grade Mike Copeland Trophy, both Ories and the Upper Hutt Rams J8s preserved their unbeaten records – but just.

Ories and the J8s are both on a maximum 30 competition points, followed by Paremata-Plimmerton on 23 and the Ruffnuts on 21.

The UH Rams Thirstys are fifth on 20 after edging the OBU Teddy Bears 21-19 in their game.

The close pattern of Reserve Grade results continued in other games, where the Axemen held off the MSP Internationals 27-22 and the Wests Mixed Veges beat the OBU Pink Ginners 14-12.