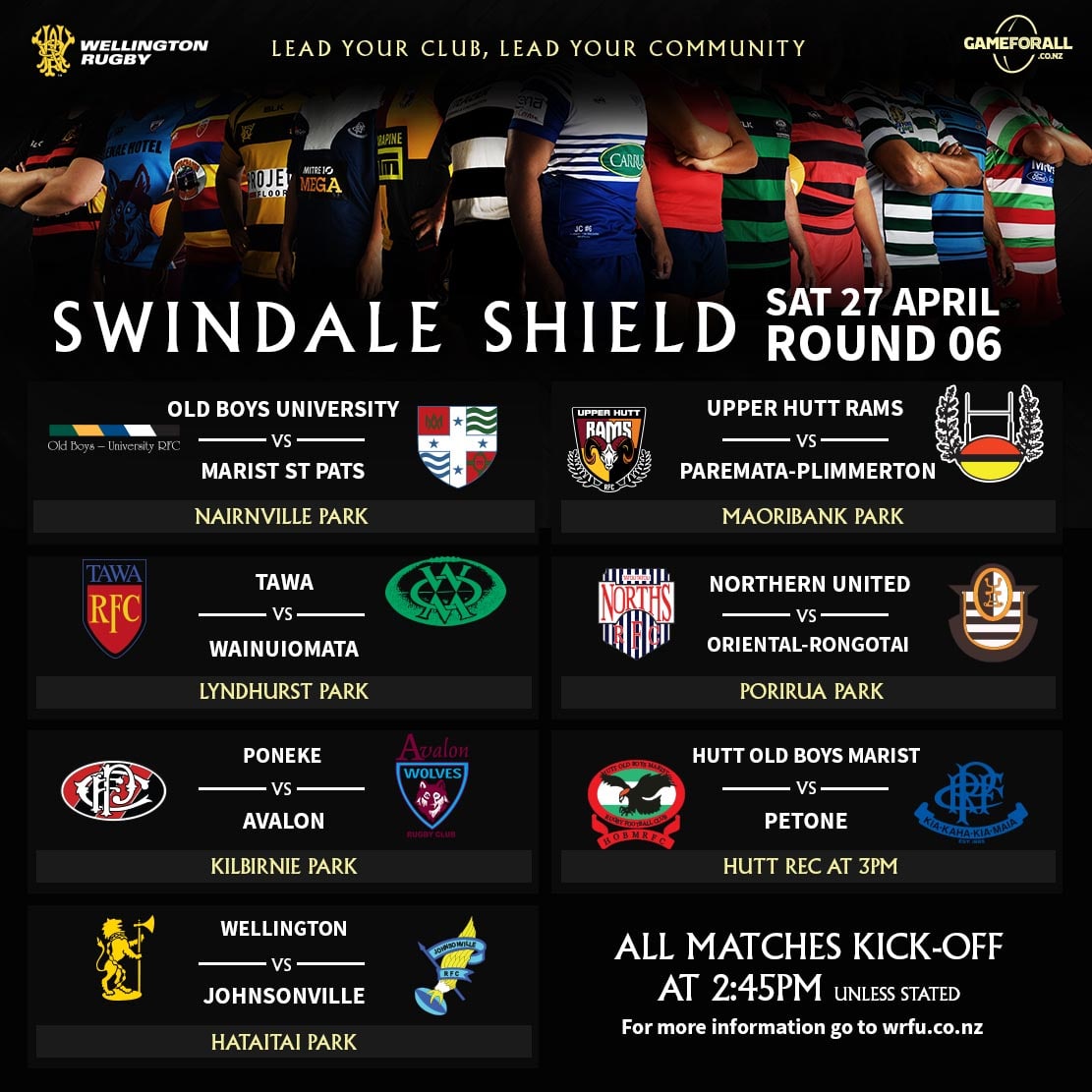 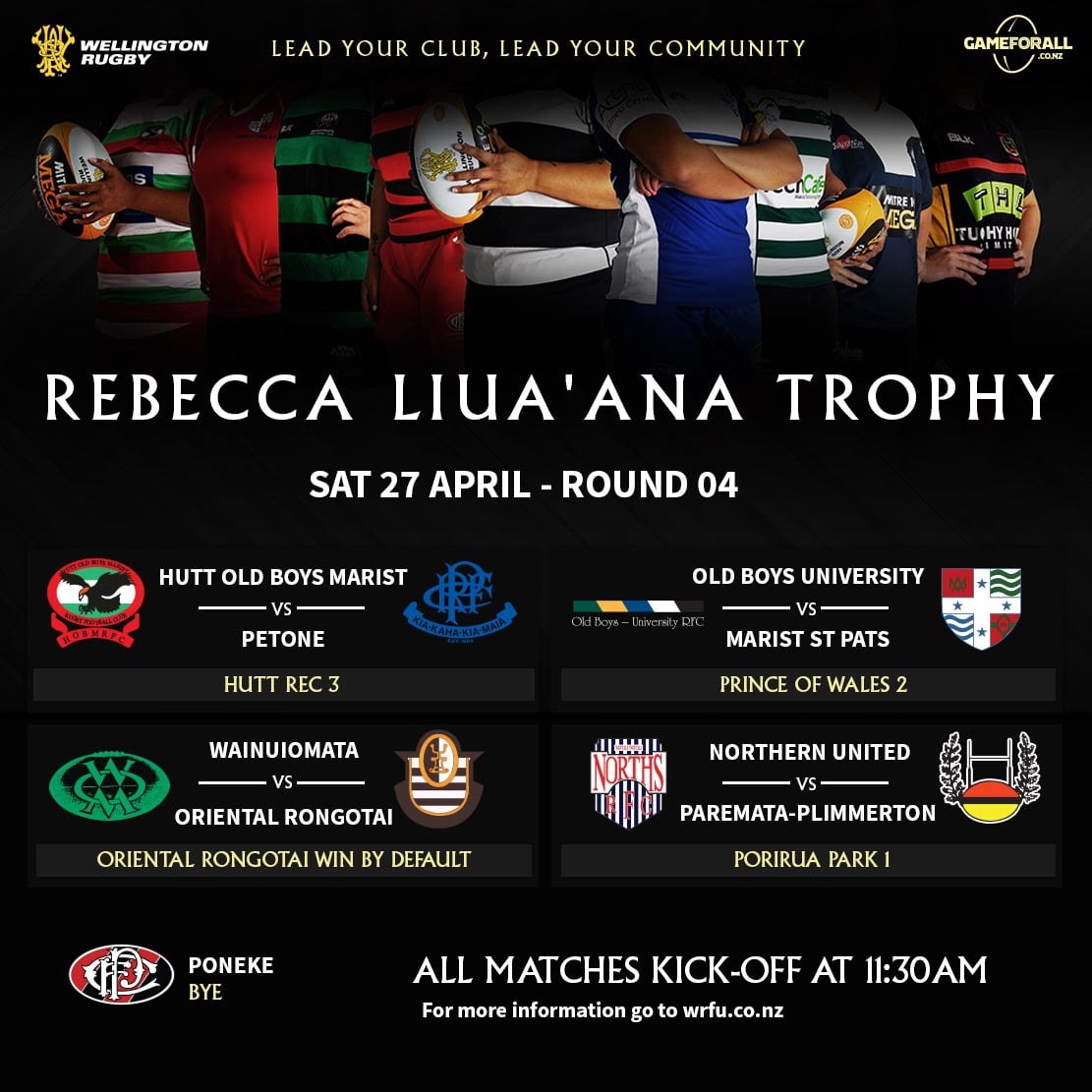 The first half of the Premier Swindale Shield competition has produced an abundance of thrilling rugby and thrown up several surprises. The 14 teams now turn for home in the races to both win the first round competition and finish inside the ‘top 7’ to contest the championship Jubilee Cup.

As it stands, Hutt Old Boys Marist are the competition leaders with five straight wins, closely followed by defending first round champions Northern United with four wins and a draw.

Just five points separate 5th place from 12th, so all matches this weekend are meaningful for all teams.

The famous McBain Shield is being played between HOBM and Petone at the Hutt Rec, one of five interclub trophies on the line in the sixth round. This is the feature match on Radio Sport, with a later kick-off of 3.00pm.

The Old Boys University Impalas are seeking their first win of the year in round 4 of the Rebecca Liua’ana Trophy when they host Marist St Pats at Prince of Wales Park, Northern United defend the Challenge Cup against Paremata-Plimmerton at Porirua Park, and HOBM and Petone meet at the Hutt Rec. Oriental Rongotai win by default against Wainuiomata. All Women’s matches are at 11.30am.

Tomorrow sees the resumption of all other grades, following last weekend’s Easter hiatus.

Joint leaders after two rounds, Old Boys University Green and Marist St Pats, travel up the motorway to play their third round Les Mills Division 1 Colts Paris Memorial Trophy contests. OBU face Tawa at Redwood Park and MSP play Norths at Porirua Park. HOBM and Petone, with one win each, meet at the Hutt Rec. The fourth match was played on Thursday, with Paremata-Plimmerton beating the Upper Hutt Rams 35-17.

In the Colts Division 2 JRD Cup, the two unbeaten teams after the first fortnight of matches are Poneke and Ories. Both are playing at home, Poneke hosting Avalon at Te Whaea tonight and Ories are welcoming the second OBU team to the peninsula tomorrow. Wellington and Johnsonville meet on Kilbirnie 3 tomorrow. All tomorrow’s Colts games are at 1.00pm.

A full round of JC Bowl U85kg matches is also slated for tomorrow afternoon, with defending champions the Upper Hutt Rams playing the HOBM Howlers at Trentham Memorial Park. The Rams and the Howlers are two of three Hutt Valley teams to have won their first three matches. The other is last year’s first round winners Avalon and they play Wellington in town.

It’s also the opening weekend of First Grade and Reserve Grade competitions, with a first up feature match in the First Grade Thompson Memorial Trophy being between the defending champions the HOBM Barbarians and the Petone Brotherhood.

A full round of President’s Grade rugby is also being played tomorrow.

A look at the seven Swindale Shield games follows:

A last play try by Anthony Utanga won HOBM a McBain Shield thriller last year. Two yellow cards proved costly for Petone. Utanga lines up at fullback tomorrow in a settled Eagles side gunning to win their sixth straight match to start the season. Petone's fullback is Piri Paraone, who returns from the Hurricanes Hunters last weekend to play his 50th match for the Villagers.

Prior form tends to matter little in a match which has become arguably the most intense and interesting occasion in the Swindale Shield.

The McBain Shield dates back to 1934 and though Petone have won it 60 times, Hutt have prevailed 11 times in the last 20 years.

Avalon are among the teams in the mid to low table congestion, separated by 5 competition points.

After two poor performances, the Wolves put away Paremata-Plimmerton 38-10 last Saturday. They will have their work cut out to topple Poneke who have won four of their first five games and play a fast-paced, positive brand of rugby.

Nick Robertson scored two tries in last Saturday’s 21-19 win away from home against Wainuiomata and captains the side from fullback tomorrow.  Up front, there is a new front row starting combination in Rhys Reiri, Ryan Hargood and Okawa Sotaro, while former captain Cole Stewart starts his first game of the year at lock.

These two heavyweights are really struggling. OBU have dropped two games in a row and recalled three retired players to sure up the tight five against Petone.

MSP have lost four from five and had their 26-game win streak against the Upper Hutt Rams ended.

OBU will welcome back Wellington U19 reps Caleb Delany and Shamus Langton who toured Japan with the Hurricanes development squad, but talisman prop Jonathon Fuimaono is on the bench and understood to be under an injury cloud.

MSP’s reserves have won 20 games in a row, but the Prems are misfiring. More than half a dozen changes were made from the Wellington and Upper Hutt games. More changes have been made tomorrow - but seemingly for the better. Three notable additions are Tietie Tuimauga and Billy Proctor coming into the starting XV from the Hurricanes Hunters and veteran Lua Lokotui starting at lock.

This match is for the Jack Lamason Memorial Cup, a noted club and representative rugby and cricket player before and after the second world war.

Who will be the last standing here?

It’s Old Timers’ Day at Upper Hutt tomorrow and the home team will have high hopes of winning their second straight match cement a mid-table position.

Tyler Tane’s late conversion and then last minute penalty to beat MSP is the stuff of legend, but can it spark a winning run for the inconsistent Rams?

Despite being plucky in all their matches so far, Paremata-Plimmerton have only scored just eight tries.

Watch the two centres Jonathan Sabo and Scott Svenson – the latter is joined in the Rams 22 for this game by brothers Todd and Josh.

Upper Hutt are on 10 points, five shy of fifth.

Last week Tawa faded in the second-half to drop their third game of the season against Norths, while Wainuiomata were pipped by Poneke.

Only four points separate the clubs on the table and typically this fixture is tough and tight. Who could ever forget the brutal 2016 Jubilee Cup semi-final?

Wainui have former Wellington Lion Marvin Karawana, usually a midfield, back, at flanker, while former Lion TJ Va’a starts at halfback again. Peter Umaga-Jensen is sure to cause problems for Tawa in the midfield.

Tolu Fahamokioa is full of bustle and he starts in the front row with Sitiveni Paongo and James Coburn, with the experienced Hemi Fermanis at lock. Sam Clark is missing from first five-eighth for this match, replaced by Luke Cummings.

It’s Old Timers’ Day at Tawa tomorrow and the Chris Stirling Cup is on the line in this fixture.

In the Jubilee Cup last season Alex Ropeti scored a last play try to win the Magpies a classic.

A similarly tight tussle is likely with both sides having won four games and scored more tries than anybody else in the competition.

Denny To’o marking Malachai Unasa in the midfield is potentially an intriguing battle, while former Ories No.8 Luca Rees is on fire for Norths scoring two long range tries against Tawa.

Ories will have the services of explosive Alex Fidow at tighthead prop, while blindside flanker Luke Taualupe promises to be a good foil for former Ories and now Norths No. 8 Luca Rees who will look to continue his remarkable try-scoring form.

Norths and Ories will be contesting the To'omaga Alex Iona Memorial Cup.

Can Johnsonville get up to win the Mick Kenny Memorial Cup?

If they are to break the duck, a struggling Axemen presents a chance.

Wellington won both games against Johnsonville in 2018, but the second contest was close.

Sam Gard’ner made a welcome return for Wellington last week and starts at openside flanker .

Johnsonville have made ten changes to their starting XV in the past fortnight.