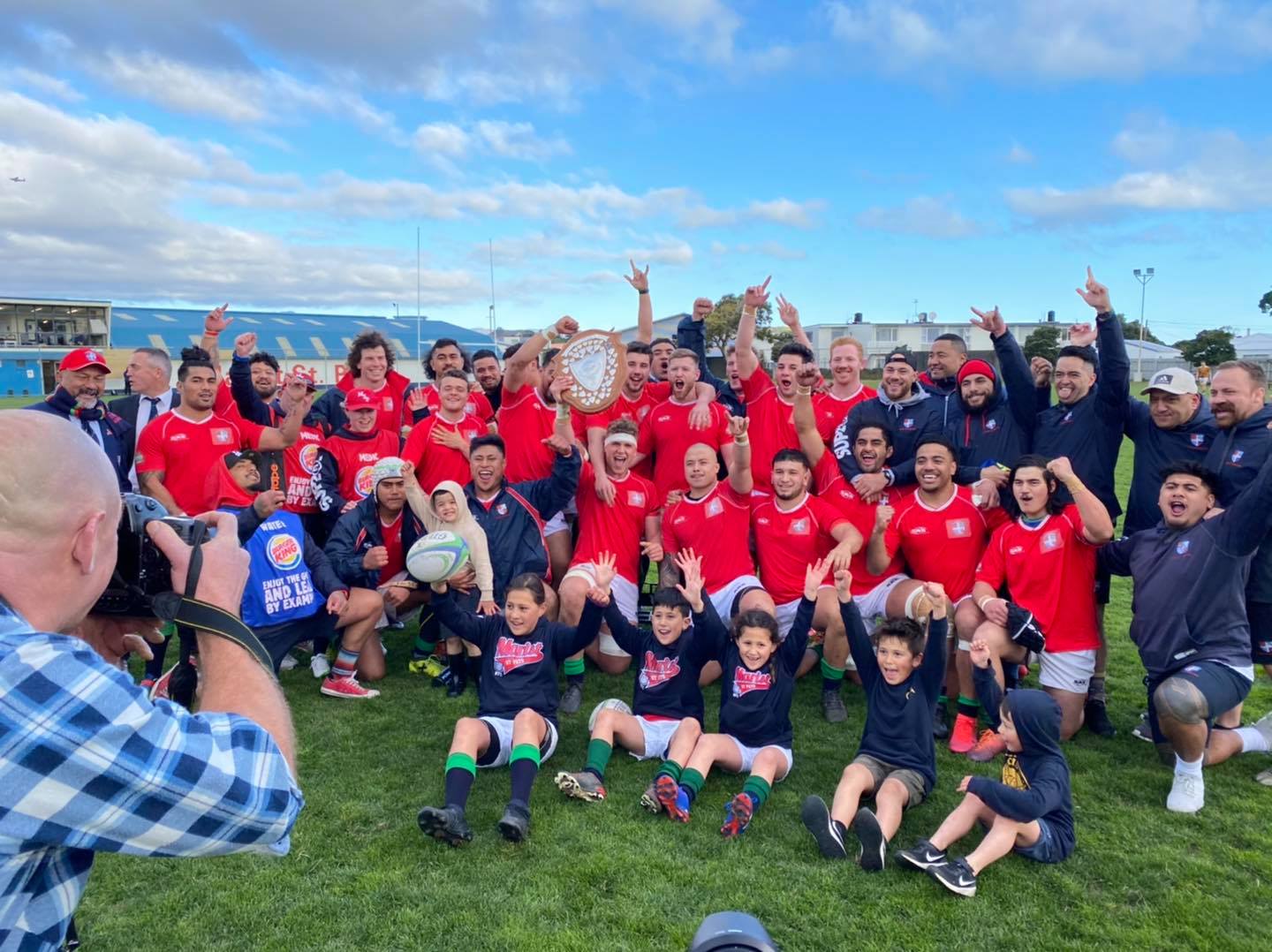 Marist St Pats won the Swindale Shield on Saturday, beating the Wellington Axemen 52-19 at home at Evans Bay Park, and finishing five points clear at the top of the table to second placed Petone.

After surviving a scare last week against Johnsonville, MSP came out firing against the Axemen and stormed to a 28-0 lead by late in the first half, soon extended to 35-0 by halftime. Right wing Sagale Aukusitino and second five Isaia Petelo scored four of their eight tries, while fullback Andrew Wells scored 17 points.

MSP will host fourth placed Old Boys University in the 1 v 4 Jubilee Cup semi-finals, while Petone will host Northern United in the 2 v 3 playoff match for the major championship spoils.

While MSP’s bonus point win over Wellington was perhaps predictable, there was drama elsewhere on the final afternoon of regular season matches.

Both OBU and Petone were key protagonists, for different reasons, with OBU losing 17-22 to Oriental Rongotai and Petone beating Northern United 21-10.

At the Polo Ground, Ories took a 17-7 lead into halftime against the Goats and held on. Wing Herman Seumanufagai scored the game’s opening try early on to put Ories up 7-0.

OBU replied with a try to lock it all up at 7-7, before Ories scored twice more before front-rowers Connor Lemon and Whetu Henry. OBU first five-eighth Dale Sabbagh opened the second half scoring with a penalty to close the gap to 17-10, and then equalised after a series of attacking scrums with a try to No. 8 Caleb Delany.

At Jerry Collins Stadium, Petone’s defensive intensity and greater impact from the bench were the telling factors for visitors Petone in their tense win over Norths.

Petone halfback Logan Henry opened the scoring with two early penalties to give them a 6-0 lead. Norths enjoyed an ascendancy in the scrums and second-five Kienan Higgins profited from the forwards industry when he touched down under the posts. The conversion by Sam Clarke made it 7-6. Henry kicked a third penalty and the halftime score was 9-7 by halftime.

Petone then opened the second half with a decisive try, captain and openside Jacob Gooch bursting down the blindside and linking with second-five Willie Tufui who crashed over in the corner.

Much of the match was played between the two ten-metre marks as both sides struggled to develop continuity. Clarke kicked a penalty for Norths inside the final 15 minutes to close the gap and set up a tense finish.

Josh Southall was the best preformed of an exceptional Petone bench. He made one bust without a boot on and kicked the ball dead. With both shoes he drove low and hard over the line to put Petone out of reach.

Willie Fine was named the Collins Medallist as man of the match, for a busy game. The Petone loose forwards hustled supremely and No.8 Tupou Sopoaga was able to win key lineout possession close to fulltime. New first-five Tom Pere produced a largely composed performance. Norths were well below par on the day and may make some personnel changes ahead of their upcoming semi-final rematch.

Tawa emerged as the ‘unlucky’ team to miss out on the Jubilee Cup semi-finals, finishing fifth.

Tawa did what was required by their fans in beating Paremata-Plimmerton 52-19, with Lions wing Pepesana Patafilo and front rower Sitiveni Paongo both scoring two tries, but missed out on points differential.

Tawa finished their 13 matches equal with Norths and OBU on 50 points, but with the points differential tiebreaker enacted, Tawa’s was +264, OBU’s was +297 and Norths was +322.

Wainuiomata booked their place in the Hardham Cup semi-finals ahead of Poneke, defeating Poneke 35-14 in their Hakaraia Trophy match at Kilbirnie Park.

Wainuiomata led 23-7 at halftime and pulled clear after the break, with five individuals scoring their tries and Poneke crossing for two tries.

In the seventh match, the Johnsonville Hawks got up to beat the Upper Hutt Rams 53-24 at Helston Park in another strong late round surge of form, meaning Johnsonville finished ahead of Paremata-Plimmerton, Wellington and Avalon.

There was high tension on the points table of the Premier Reserve Harper Lock Shield competition, with Norths presented with the trophy at Jerry Collins Stadium after beating Petone 39-10 and completing an unbeaten first round season.

But below the top two, Petone’s failure to earn a bonus point from their defeat to Norths opened the door for others. HOBM were beneficiaries, beating Avalon 74-12 and moving into third. OBU went the other way, their 21-29 loss to Ories seeing them slip to eighth.

Tawa's 52-27 win over Paremata-Plimmerton saw them draw level on points with Petone, but the Villagers were able to hang on to fourth place by virtue of their 25-24 over the Lyndhurst side three weeks ago. Poneke's 71-24 win overf Wainuiomata was in vain, while Johnsonville beat Stokes Valley 40-15.

Johnsonville and Avalon and Stokes Valley and Paremata-Plimmerton will contest the 9-12 playoffs and Wainuiomata and Petone White will play in the 13 v 14 match.

There were two U85kg division finals on Saturday, with the Upper Hutt Rams beating Eastbourne 30-14 in the decider of the U85kg Paul Potiki Shield Division 1 competition and Marist St Pat’s beat Wellington 20-12 in the final of the Division 2 Tony O’Brien Shield.

In the Colts competition, OBU Green were presented with the first round Paris Memorial Trophy, after their narrow 27-25 win over Tawa at Lyndhurst Park.

OBU fought hard for a 20-8 halftime lead held off a fast-finishing Tawa who achieved at least one bonus point from the game and thus will meet OBU again next Saturday in the 1 v 4 Colts John E Kelly Memorial Cup Colts semi-final.

In the other Colts result on Saturday, HOBM Green and Norths White drew 20-20.

The second division Colts semi-finals for the Vic Calcinai Memorial will see HOBM Green and the Rams play in one match and Norths White and OBU Black play in the other. Poneke and Johnsonville will play for the Eric Connolly Memorial Cup.

The Oriental Rongotai Vatos have won the Reserve Grade Mike Copeland Cup competition with next week’s final round to spare.

Ories beat the OBU Teddy Bears by default, to move to 57 points on the ladder, ahead of the Upper Hutt Rams J8s and the Paremata-Plimmerton Punters in joint second on 50 points.

The Rams J8s also had a win by default, over the OBU Pink Ginners, while the Paremata-Plimmerton Punters beat the OBU Righteous Pack 56-15.

The MSP Internationals beat the OBU 69ers by default, while the Poneke Ruffnuts maintained fourth place with a 24-20 win over the Wellington Axemen and the UH Rams Pirates beat the OBU Mixed Veges 26-7.