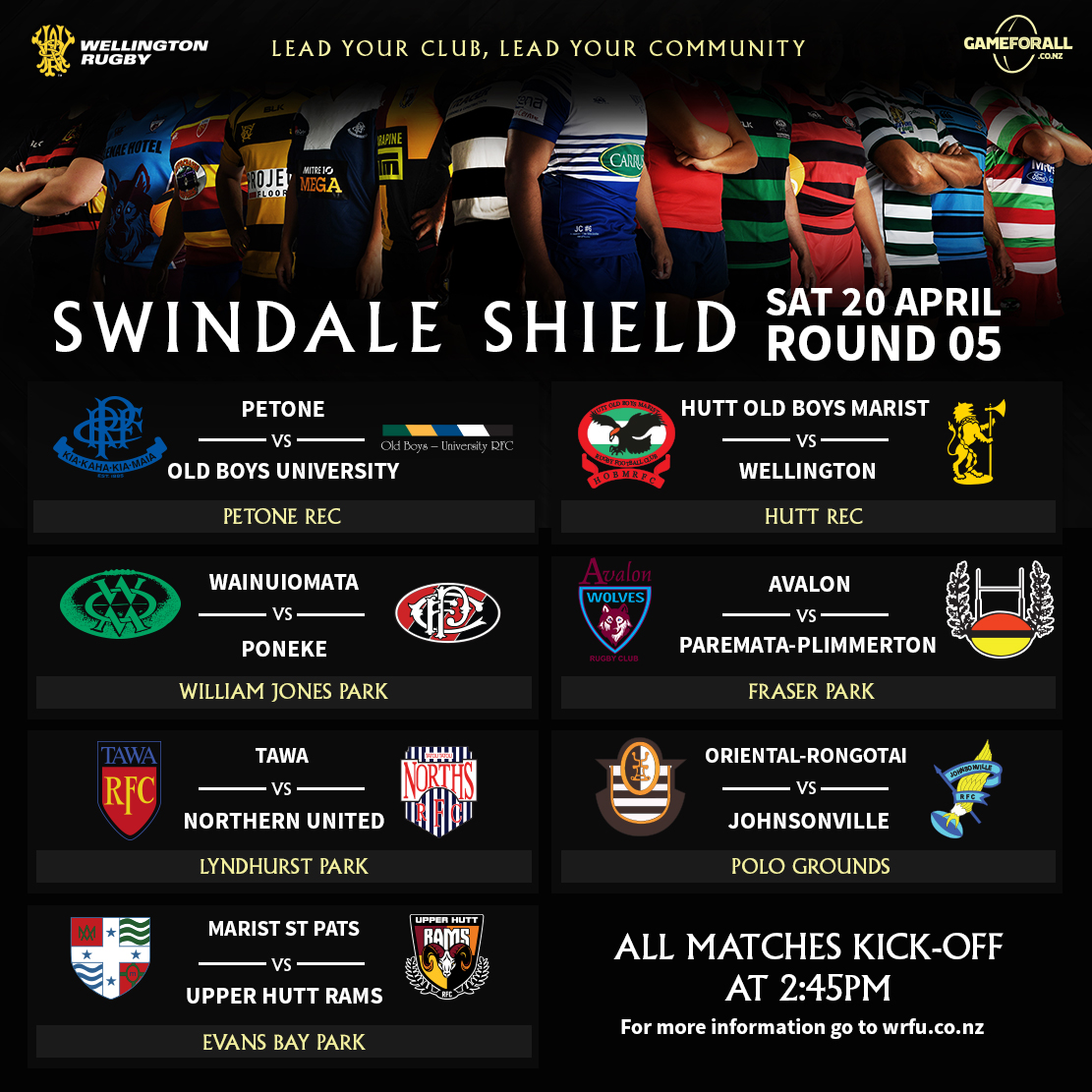 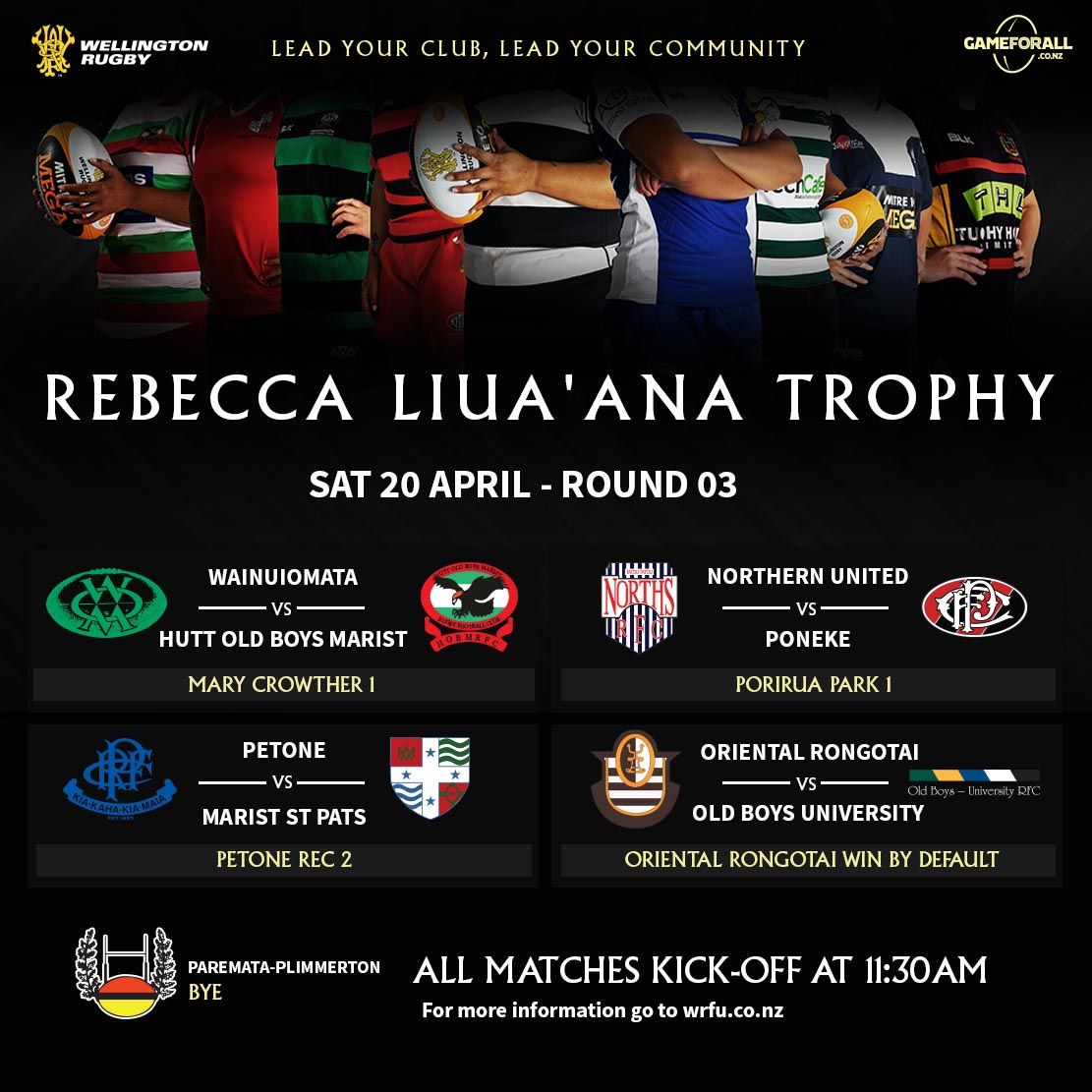 The four-day Easter weekend is a break for many, but several of Wellington’s clubs will be working hard on Saturday to stay in contention with the leaders in the Swindale Shield as the new 10-round competition reaches its halfway point.

The Swindale Shield is one of three grades in action this long weekend, along with the Premier Reserve and Women’s competition.

Four teams are unbeaten in the Premier Reserve Harper Lock Shield (HLS), and all four meet each other this Saturday in the 1.00pm matches around the region. Defending champions Marist St Pats host the Upper Hutt Rams at Evans Bay Park and Tawa and Norths meet at Lyndhurst Park. Wainuiomata come up against Poneke at William Jones Park, also shaping as a close HLS match to follow.

In the Women’s first round of the Rebecca Liua’ana Trophy, defending champions Northern United come off their bye in a scheduled third round clash at Porirua Park against Poneke. In the other three matches, Old Boys University has defaulted to Oriental Rongotai, home team Petone hosts Marist St Pats and Wainuiomata and Hutt Old Boys Marist line up at Mary Crowther Park. All three games are at 11.30am. Paremata-Plimmerton has the bye.

There are two games on the radio this weekend, with Gordon Noble-Campbell and son Aleks commentating Petone and Old Boys University for Radio Sport and Brad Hudson running the microphone for Te Upoko in the Tawa versus Northern United encounter.

A look at the seven Swindale Shield fixtures below:

OBU denied Petone a bonus point in the final round of the Swindale Shield last year, which consigned the Villagers to the Hardham Cup.

Petone have been held to consecutive draws with No.8 Tupou Sopoaga in good form in both fixtures.

OBU bounced back from their Eagles defeat by accounting for Avalon at home. More changes have been made for this match, including the return of Ian Kennedy at lock, following his retirement at the end of 2017, Morgan Poi at No. 8, returning from injury, and flanker Matt Sleith who has transferred from HOBM.

This is for the Marc Verhoeven Memorial Trophy and it is Old Timers’ Day at Petone.

This should be a tight tussle. Can Petone break par?

The Eagles are flying high, unbeaten after a month, despite a fourth quarter scare by Poneke last Saturday. In 2018, they accounted for Wellington 69-15 in this match.

The Axemen have proven competitive this season, but have only secured a solitary victory.

HOBM are in the top five on both attack and defence in the Swindale Shield and it is hard to see them having their wings clipped in their first match at home this year.

Halback Sheridan Rangihuna is a key player for them and also scored 16 points against Poneke, while first five-eighth Glen Walters’ running game was a positive and Jordan-Glen Bradbrook has been a more than welcome addition in the midfield. Look out for Tasi Fidow, who has switched from loose forward to hooker for this clash.

Wainuiomata have enjoyed a promising start to 2019 and last week did enough to foil Paremata-Plimmerton 39-24. Centre Michael Lealava’a scored three tries, and he partners Marvin Karawana in an experienced midfield tomorrow. TJ Va’a comes into the starting XV at halfback, in place of veteran Uale Mai who sits this one out.

Poneke fell to the Eagles on Saturday, but will fancy their chances over the hill with three wins on the trot prior to last week. Levi Harmon at centre is back to his best and hooker Andrew Jones is a valuable asset and scored a sizzling try from an early kick-off against HOBM. Lock and last year’s captain Cole Stewart is named on the bench for the first time this year.

The Hakaria Trophy is on the line, with strong meaning for both clubs. Typically Wainuiomata versus Poneke games are tight, with a Matt Jacobs penalty from halfway a few years ago one of the most memorable moments in recent Wellington club rugby history.

Avalon return to Fraser Park smarting from a 54-14 defeat to OBU. Paremata-Plimmerton knocked over Johnsonville a fortnight ago before extending Wainuiomata.

Both sides are stronger in the forwards than they are the backs with props Teariki Kie Tonga and Junior Davey bedrocks for the visitors.

Avalon might have an edge in the loose with Logan Blake, with Sefo Aumua missing for this game but with an able replacement in Scott Waldrom. Blockbusting second five-eighth Ben Peni makes his return to the Wolves after a long-term injury layoff.

This clash is set to go down to the wire.

Norths snapped a seven game losing streak to Tawa in 2018 en-route to winning the Swindale Shield. Norths have the best attack and defence in the competition, but weren’t entirely convincing against the Axemen. However No.8 Luca Rees lifted his try tally to seven.

Norths appear much stronger up front, but Tawa at home always rise for this local derby “Battle of the Bridge” occasion and with the Sammy Saili Memorial Trophy on the line.

Johnsonville will be rearing to go after being overpowered by Tawa last weekend.

Ories’ 27-18 triumph over the Upper Hutt Rams was hard-earned proving they can grind it out as well as score prolifically.

Look out for the Magpies, as they look for a straightforward win on their Old Timers’ Day.

MSP were held to a 24-24 draw by Petone at home last Saturday, with Faresa Tasele scoring two tries in a blockbuster performance. Valentine Meachen starts at hooker for the first time this year, replacing youngster Tyrone Thompson, while Grayson Whitman takes over from James Proctor at the pivot, in two key changes from last week.

Upper Hutt have had an unsettled backline. Former MSP player Tyler Tane runs the Rams cutter tomorrow, while Scott and Todd Svenson are further out in the backline. Look out for Lui Luamanu at lock in this first start of the season.

Although its only Week 5 both sides reside in the regulation zone and need to gain some momentum soon.

The controlling official in this match is Manawatu whistle-blower Ben Koch.