Jubilee Cup playoff spots set to go down to the wire 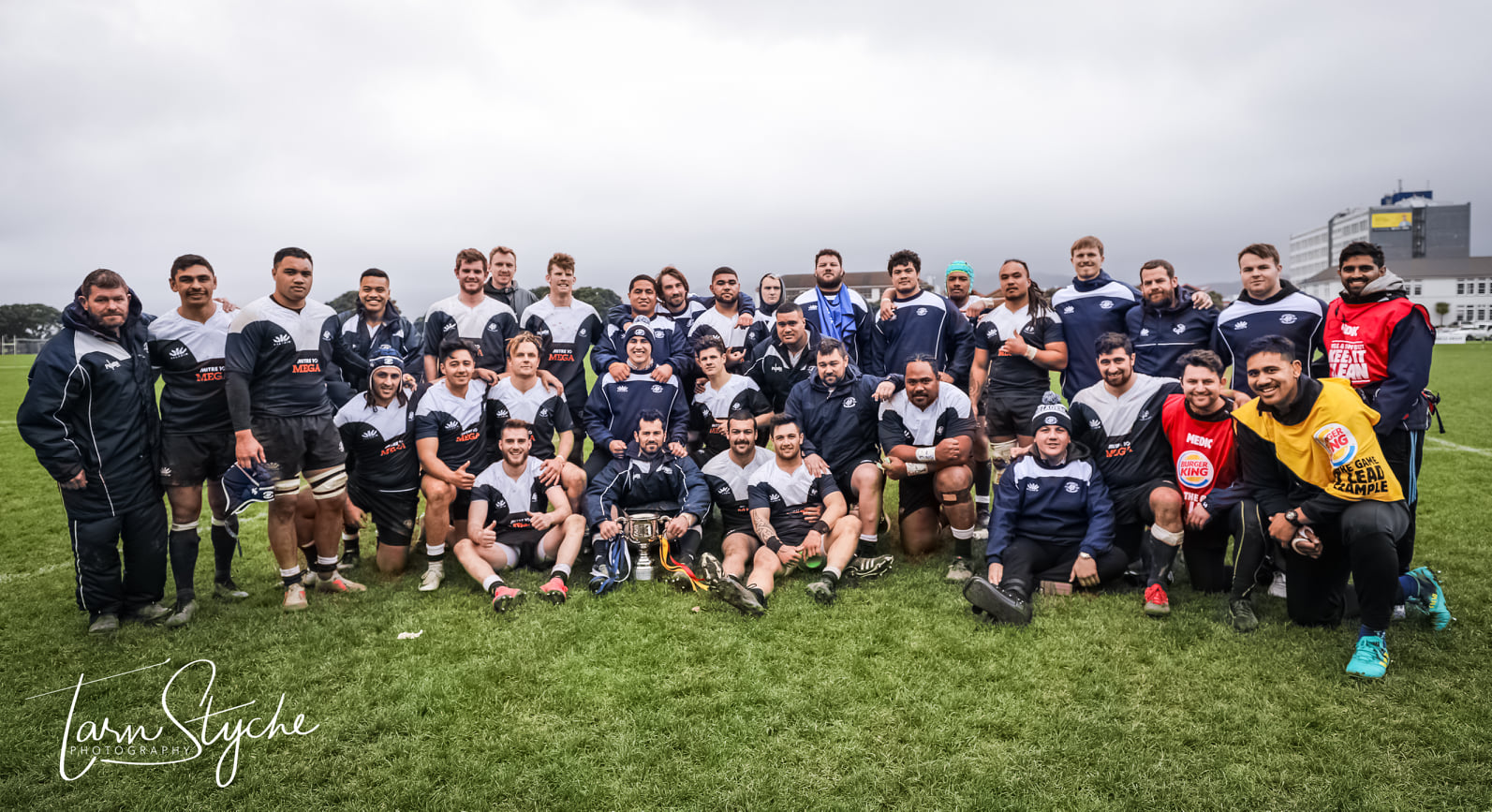 There will be plenty to play for many teams in next weekend’s final round of Swindale Shield matches, with up to six teams still in the mix to finish inside the top 4 and qualify for the Jubilee Cup semi-finals and another couple of sides eyeing up a Hardham Cup play-off spot.

At the top of the points table, Marist St Pats (50) will need to beat the lower ranked Wellington Axemen next week to get their hands on the title and seal their home semi-final berth, after coming from behind to pip the Johnsonville Hawks (11) 26-24 on Saturday.

Trailing throughout most of the match, and down 5-19 at halftime, MSP came back to level the scores at 19-19, before Johnsonville scored their fourth try to move ahead again. Leaving it late, MSP crossed for their winning try through fullback and captain Andrew Wells who darted over at the northern end of Helston Park from a quick tap penalty and then kicked the conversion to give his side a 26-24 win.

In winning this match, MSP are the only side to officially book their Jubilee Cup semi-final place, heading into next weekend’s 13th and final weekend.

Northern United (49) are second, after beating the Avalon Wolves (2) 45-7 at Fraser Park. Norths won the game seven tries to one, with seven different players scoring the tries in a wholesome team effort. For Avalon, flanker Logan Blake crossed for a first half ty.

Old Boys University (48) are in third place, after a similarly dominant 48-11 win over Wainuiomata (29) for the Peter Dunford Cup at William Jones Park.

After conceding two early penalties, OBU got on top and eventually established a 22-6 lead by halftime. OBU wing Ty Poe crossed for the first try, ahead of Wainuiomata flanker Sam Smith being sinbinned and then OBU’s second try to prop and captain Jonathan Fuimaono that made it 10-6.

The Goats scored two more tries in quick succession, a 50-metre intercept to wing Reece Plumtree and a length of the field strike to fullback Sam Reid after a break by centre Alex Ropeti.  With the wind in the second half, OBU asserted themselves early. Prop Finnbarr Kerr-Newell opened the scoring, while Reid scored two more tries for a hat-trick and Plumtree grabbed his second intercept try.

Petone (46) round out the top four heading into next week after beating Paremata-Plimmerton (13) 46-22 at home to retain the Ken Gray Cup.

Petone captain and flanker Jacob Gooch was playing his 100th game, and himself and his Villagers teammates quickly got on top in the contest for the loose ball. Petone went on to win eight tries to three, with lock Jack Ross and halfback Cam Ferreira each bagging braces. For Paremata-Plimmerton, front rowers Teariki Kie Tonga and Peni Tapau each scored tries, as did right wing Jordan Clark.

Tawa (45) are fifth but coming into ominious form at the right end of the season, beating the Upper Hutt Rams (20) 60-7 at home at Lyndhurst Park.

Tawa won by the margin of 10 tries to one and had the game sewn up by halftime with a 29-0 lead. They were far too strong across the park for the Rams, with a dominant scrum a highlight.

With the floodlights turned on to brighten the dull day, Tawa quickly asserted themselves and soon scored through halfback Swayde Brightwell who darted blindside from an attacking scrum.

Tawa fullback Randall Bishop was sinbinned just before the break, but his team broke out through flanker David Massey who offloaded to centre Tom Maiava and they led 29-0 at halftime.

The Rams improved after halftime and put together some promising phases, with lock Jamie Norman particularly busy. Tawa weathered the storm and broke out to score through replacement wing Maui Wallace who plucked a Cummings kick out of the air and flew through to score.

Maiava scored an intercept try and wing Romu Senileba scored from the next kick-off to put Tawa up 50-0 with 20 minutes still to play. The Rams finally got on the board following a quick tap penalty on halfway and break by centre Dan Schrijvers and try to lock Tyler Graham, but Tawa scored twice more to seal a strong win.

Last year’s Swindale Shield winners Hutt Old Boys Marist (41) occupy sixth spot on the standings and can still sneak into the top 4 should the waves part for them, after their narrow 24-22 win over Poneke (27) at the Hutt Rec.

Playing with the breeze, the visitors, led by captain and centre Ben Huntley playing his 200th game, more than kept the Eagles in check, despite HOBM establishing a significant dominance at scrum time.

The Eagles scored first when No. 8 Mika Alaifatu finished a sweeping downfield move, but Poneke were in front moments later when fullback Isaac Moe-Jenkins picked off a pass, and when HOBM flanker Willie Rua was sinbinned for a professional foul Poneke profited through a Caleb Robson penalty and a try to Jimmy Hewitt to put them up 15-5 lead to the break.

Turning into the northerly, Poneke kept it tight and halfback Mario Counsell soon scored. But HOBM redoubled their efforts with an immediate response through wing Fritz Rayasi. but it wasn’t until a quickfire pair to Freddie Sunia and Fereti Soloa that they eventually drew ahead with about 15 minutes to play. Poneke also turned down a point-blank penalty with about 10 to go that would have given them the lead back.

In the final game of the round on Saturday, Oriental-Rongotai (31) defeated the Wellington Axemen (12) 58-12 at Hataitai Park, to put themselves on track for the Hardham Cup semi-finals.

There were the semi-finals of the U85kg grade this weekend, with the two games in each division both following similar patterns with a close result and a comfortable win.

In the Division 1 Paul Potiki Shield semi-finals, top qualifier the Upper Hutt Rams beat last year’s winners the Avalon Wolves 27-15 in one semi-final and Eastbourne edged the OBU Scallywags 46-43 in the other.

In the Division 2 Tony O’Brien Shield playoff games, Wellington beat Wests 48-5 and MSP defeated Poneke 34-31, in a match that saw the MSP side come back from 0-17 down at halftime.

Northern United have won this year’s Premier Reserve Harper Lock Shield with next weekend’s final round to spare, after their 57-10 win over Avalon. Norths beat MSP in the round-robin, whom they hold a 5-point lead over at the top of the standings.

Second placed MSP’s second straight win by default (this time over Johnsonville) did however guarantee that they’ll host a semi-final in a fortnight’s time. Petone maintained third with a 48-10 win over Pare-Plimmerton, and now just need a point next week (away to Norths) to ensure they’ll play post-season rugby.

OBU remain fourth after a 60-5 win over lowly Wainuiomata, but Tawa and HOBM are just a point behind after their 26-13 and 27-14 wins over Stokes Valley and Poneke respectively.

The sixth match played saw Ories keep their mathematical hopes alive by beating the Petone Brotherhood 88-0 in the biggest margin of the day.

There were four Paris Memorial Trophy Colts matches played on Saturday, with leaders OBU Green continuing their overall dominance of this grade by beating Poneke 64-5.

Norths Colts Blue beat OBU’s second side 18-6, to cement second place, while Petone remain third after beating the Norths second side 47-0. Tawa beat the Upper Hutt Rams 37-10 at Redwood Park in the other fixture.

Heading into next weekend’s semi-finals, OBU Green will host one semi-final and Norths Blue and Petone have both sealed their spots in the top 4 John E Kelly Cup playoffs.

Fourth placed Tawa will just need a bonus point from their last round match to sneak in ahead of HOBM White, whom they lost to in the round-robin.

The next four sides will contest the Vic Calcinai Memorial Cup semi-finals, with OBU Black and the Rams having already qualified for at least another week’s action, with Poneke and Johnsonville too far back to progress further.

In the Reserve Grade Mike Copeland Trophy, Oriental-Rongotai have pulled clear at the top of the table with a win by default over Stokes Valley and the Upper Hutt Rams J8s stumbled again, beaten 17-14 by the Paremata-Plimmerton Punters, who have moved up to join them in equal second position.