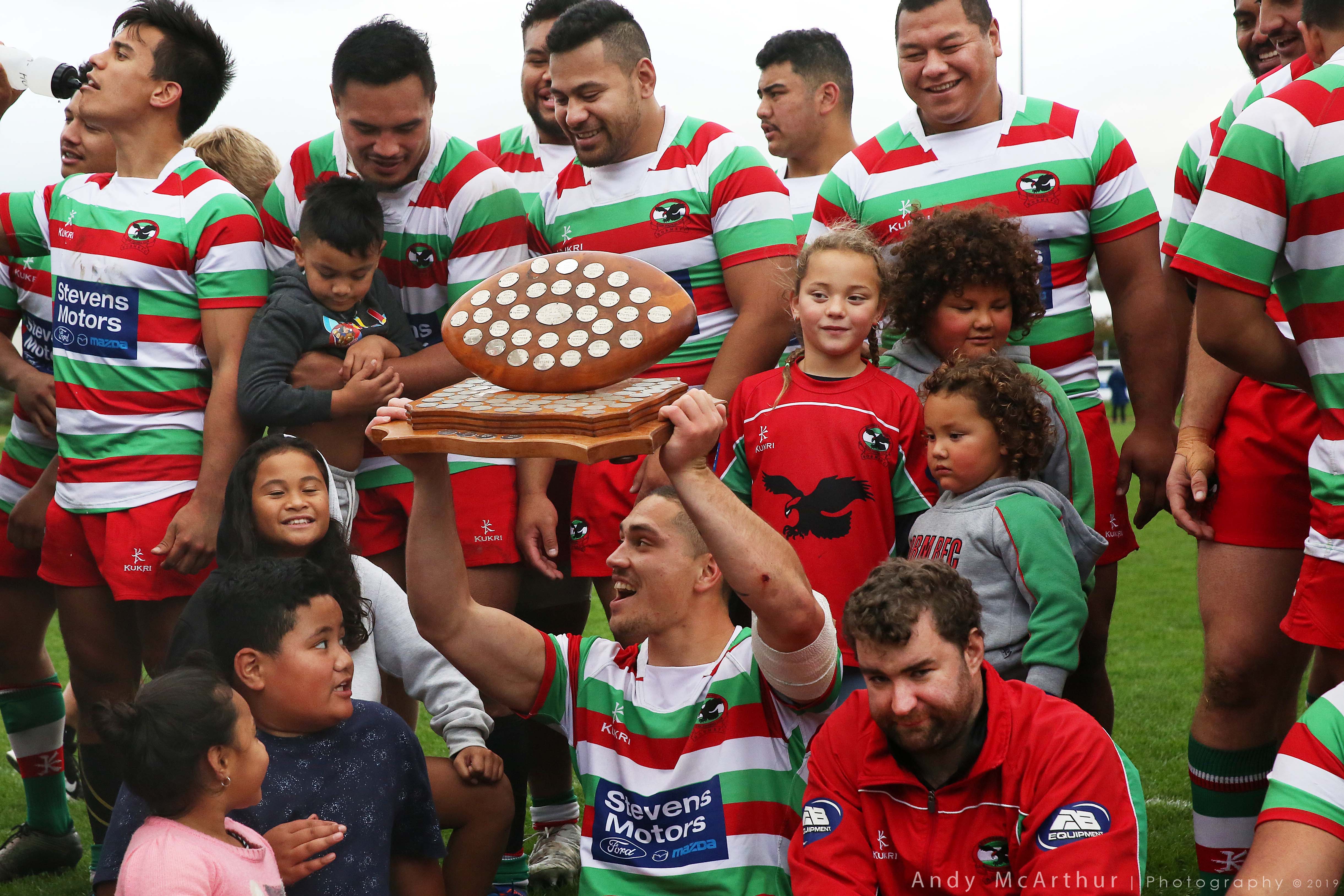 HOBM with the McBain Shield after their 46-26 win over Petone. Photo: Andy McArthur

The Hutt Old Boys Eagles beat Petone 46-26 to retain the McBain Shield and preserve their lead at the top of the Swindale Shield standings after the sixth round of 10 played around Wellington on Saturday.

Playing with a strong wind – that was a key factor in the run of play in all matches on Saturday – the Eagles withstood a fast start by Petone in the first half who scored the opening McBain 2019 try through right wing Adam Simpson.

HOBM replied through tries to lock Jack McCormack and left wing Fereti Soloa, but Petone scored again through right wing Willie Fine and the Eagles led just 14-12 with halftime fast approaching. However, right on halftime first five-eighth crossed out wide and halfback Sheridan Rangihuna converted to put the Eagles up 19-14.

HOBM then scored early into the second half through flanker Jordan Gillies in a clutch into-the-wind try. Petone replied through second five-eighth Jarrod Adams, but HOBM hit back immediately through Soloa and from there they kept their lead and went on to win.

It was a similar pattern of scoring at Porirua Park in which Oriental-Rongotai beat Northern United 32-25 and moved to second on the Swindale Shield points table behind HOBM.

Playing into the strong northerly, Norths struck first blow when right wing Losi Filipo scored in the corner after a mistake by Ories from the opening kick-off, but Ories hit back when flyhalf Manu Manuao sliced through to scored from an attacking scrum. Further tries were traded by Ories centre Paulo Aukuso and Norths flanker Parekura Lalaga and Ories held a 17-15 lead into halftime.

Right on halftime, Ories scored a decisive try to go 22-15 up in the break. Moving the ball wide in broken play, outstanding blindside flanker Luke Taualupe delivered a short pass to left wing Reuben Va’a who flashed through to score.

Now playing into the wind, Ories went further ahead in the 45th minute after a multiphase build-up inside Norths territory and a quick tap penalty by Hurricanes prop Alex Fidow who scored to make it 29-15. Manuao kicked a penalty and Ories had the match won at 32-15 up.

Norths came back with two tries, including a second try on fulltime to Lalaga to earn two vital bonus points, but Ories were celebrating a decisive win in which their forward pack stood up.

At Nairnville Park, Old Boys University beat Marist St Pats 15-10 to retain the Jack Lamason Memorial Cup. In a tight match between the two mid-table clubs fighting for Jubilee Cup spots, it was 0-0 until deep into the first half.

The deadlock was broken just before the break through a Dale Sabbagh penalty and then a try to No. 8 Teariki Ben Nicholas that put them up 8-0 early in the second spell.

Ben Nicholas was to score a second try, that put them ahead 15-0, before MSP came back with two scoring plays to see them close to a try in arrears. MSP finished the game hot on attack but couldn’t breach the Goats defences again.

At Kilbirnie Park, Poneke beat the Avalon Wolves 34-20 in a tough encounter for both sides. Avalon took an early into-the-wind lead, but Poneke responded with tries to wing Johannes Taankink and No. 8 Brandon Feterika.

The Wolves took a 17-12 lead into halftime through an intercept try and then another try to lock Akuila Alatini. With help off the bench, Poneke rallied in the second half and re-took the lead and eventually kicked clear through tries to Robertson, a pair to Levi Harmon, and a second to Taankink against a sole Wolves penalty.

It was a similar story at Lyndhurst Park. Wainuiomata played into the wind in the first-half and their forwards simply rolled their sleeves up and refused to let Tawa have the ball, and profited through lock Bevan Clark.

Tawa eventually got some possession and scored through Kemara Hauiti-Parapara after some good work by debutant winger Tane Heremaia, and then Tolu Fahamokioa. Wainuiomata then took the lead after halftime through a Josh Robertson-Weepu penalty and a Peter Umaga-Jensen intercept, only for Tawa to retake it through Hauiti-Parapara’s second and the Folau Vea. Robertson-Weepu closed the gap to 24-23 with a pair of penalties.

But Tawa’s deep bench, led by veteran Peniasi Tokakece, saw them home with unconverted tries to Faraimo Nofoaiga and Sam Tuala leaving a 34-23 final score and the Chris Stirling Cup for another year.

The Rams led 14-0 late in the first half before a try under the posts to Paremata-Plimmerton pegged the deficit back to 14-7 by the break.  As they have done all season, the plucky Pare-Plim side hung in there early in the second half, but it was a try to Rams left wing Soli Malatai that helped break the shackles and they pulled clear. Lock Lui Luamanu finished with a hat-trick of tries in the six tries to one win.

At Hataitai Park, the Wellington Axemen won a commanding 86-5 victory over Johnsonville. The Axemen were fast out of the blocks and raced to a 28-0 lead and then went to 42-5 by halftime.

Wellington lock James Polinati finished with a hat-trick, while wings Eremia Tapsell and Ollie Marshall centre Lati Lati and pivot Tearana Hakiwai all scored doubles in the 14 tries to one win. Loosehead pop PJ Sheck scored their only try. Marshall finished with 26 points for the Axemen.

Many Ories players and supporters were instead in attendance at Porirua Park to watch Northern United celebrate Helen Collins’ 150th game for Norths by beating Paremata-Plimmerton 25-7.

Norths scored five unconverted tries to take their third straight win of the competition (having had their bye already), but were pressed hard by a plucky Paremata-Plimmerton side that took the game to them in the first half against the wind and then closed to within three points early in the second spell when halfback Tawny Burgess scored a runaway try just after halftime.

But Norths rallied at this point and scored two more tries in relatively quick succession to take the match away from the visitors. Both these tries were scored by right wing Lyric Faleafaga.

Paremata-Plimmerton stayed in the fight and Norths could only manage one further try with fullback Julie Tusa putting centre Terina Higgins away from a break in the 61st minute.

Pare-Plim stayed in the contest though, and a runaway try to Higgins in support of fullback Julie Tusa was all Norths could do to add to their score.

In the other two Women’s matches played, Petone got past HOBM 27-14 despite missing both Jackie Patea-Fereti and Acacia Te Iwimate, while the OBU Impalas beat MSP 26-15.

Poneke had the bye.

Marist St Pats and OBU Green remain unbeaten at the head of the Les Mills Colts Paris Memorial Trophy. MSP headed to Porirua Park and beat Norths 36-19, winning the game in the first half on the top field with a burst of three tries and a penalty in a 20-minute period.

In the Under 85kg JC Bowl the Upper Hutt Rams took the top-of-the-table clash with HOBM 17-12, while defending first round champions Avalon Wolves also remained unbeaten after beating Wellington 22-8. Johnsonville headed off Paraparaumu 26-5, MSP had a big win 42-5 over Eastbourne, and in the only late game the OBU Scallyways outfit beat the Wests Roosters U85kgs 59-5.