Helen Collins to reach 150 game milestone for Norths this weekend 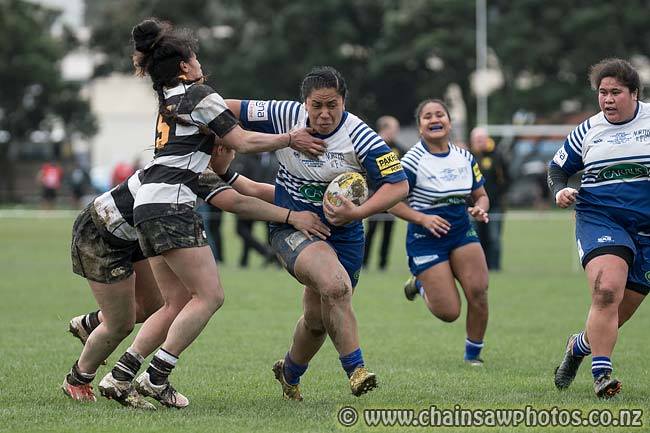 Helen Collins is set to run out for her 150th match for Northern United on Saturday.

We caught up with Helen about her rugby career. From its orgins as a teenager out of Tawa College, to playing several seasons for the Wellington Pride and wearing the Manu Sina jersey for Samoa.

Congratulations on notching 150 games for Northern United, how much are you looking forward to it and how will you celebrate?
I am most excited that my body is still operating! I will celebrate as I do most weekends, with my club family down at Norths. A big reason why I still enjoy playing is largely due to my harshest critics, but by far my biggest supporters - my parents. This game will be for them.

You started your career at Poneke? Do you know how many games you have played in total in Wellington club rugby?
I started my rugby with Poneke, a club that I still have a deep sense of belonging to. No one was counting games back then, but I was there from 2002-2006 so I definitely would have notched up a few in the red and black. I was 17 when I first started playing, with Poneke in 2002.

Did you also play any rugby at school? What other sports did you play?
Tawa College didn’t have a rugby team when I was at school, so a friend and I joined the Viard College 7s team in our 7th form [Year 13] year, coached by Dawn Patelesio. Unbeknown to me, she would eventually be my teammate. My main sport throughout my school years was netball.

What positions in rugby have you played and what would be your favourite or most well-known position?
I started on the wing, moved to the midfield, had a few years at lock, moved out to loosie and back to the midfield. I can’t say I have a favourite position, they all involve getting hit and pretending it doesn’t hurt and I’m not sure that I have a position that I’m most well-known for because I move around a lot. Credit to the people I play next to for helping me slot in!

What is a highlight of your club rugby career?
The most memorable match would have to be the final in 2011 at Memorial Park, Masterton. We went down 12-8 to a hearty Eketahuna side who were new to the competition, but played like a team that had been around for years. By far the best game I have had the privilege to be a part of.

What have been highlights of your representative rugby career?
A highlight for me would definitely be putting on the Manu Sina jersey for Samoa. I was lucky enough to play 15s and 7s for Samoa. I travelled to France to be a part of the World Cup in 2014 and also played in the repechage 7s in Ireland in 2016.

Who have been some tough or well respected ‘teams’ you have played over the years? Is there a team or club that you have enjoyed the challenge of playing against?
For me personally, every team is tough. There is always an element of surprise that no matter how much homework you do, something or someone will always catch you off guard. For me those teams would have to be Eketahuna and Johnsonville.

Who have been some of the respected ‘individuals’ you have played with and against?
Starting my rugby at Poneke meant I got to play against people who would eventually be my teammates. Players like Agnes Dean, Dawn Patelesio and Tia Sa were definitely some of the powerhouse names back then.

You have played Women’s rugby with some of your sisters and cousins - who are these family members you have played with and against?
I am the youngest of four. I’ve played with both my older sisters Tiggy and Bee at Poneke and at Norths. I have been lucky enough to play with and against some of my cousins over the years from various clubs:
Norths: Seta Fonoti, Tia Faumuina, Rina Taueetia, Jess Saolele, Angela Pau’u, Phonenix Collins, Penina Collins
Ories: Helena Lawrence, Mikayla Figliola
Petone: Zoe So’otaga, Mac Collins
Poneke: Leilani Feaunati
Stokes Valley: Jenny Finau

How has the women’s game changed since you started and how has it developed through your career?
It is definitely faster and more free flowing. Women today have the opportunity to work on their craft in a lot more detail, so it means that the knowledge base grows for the future of the sport.