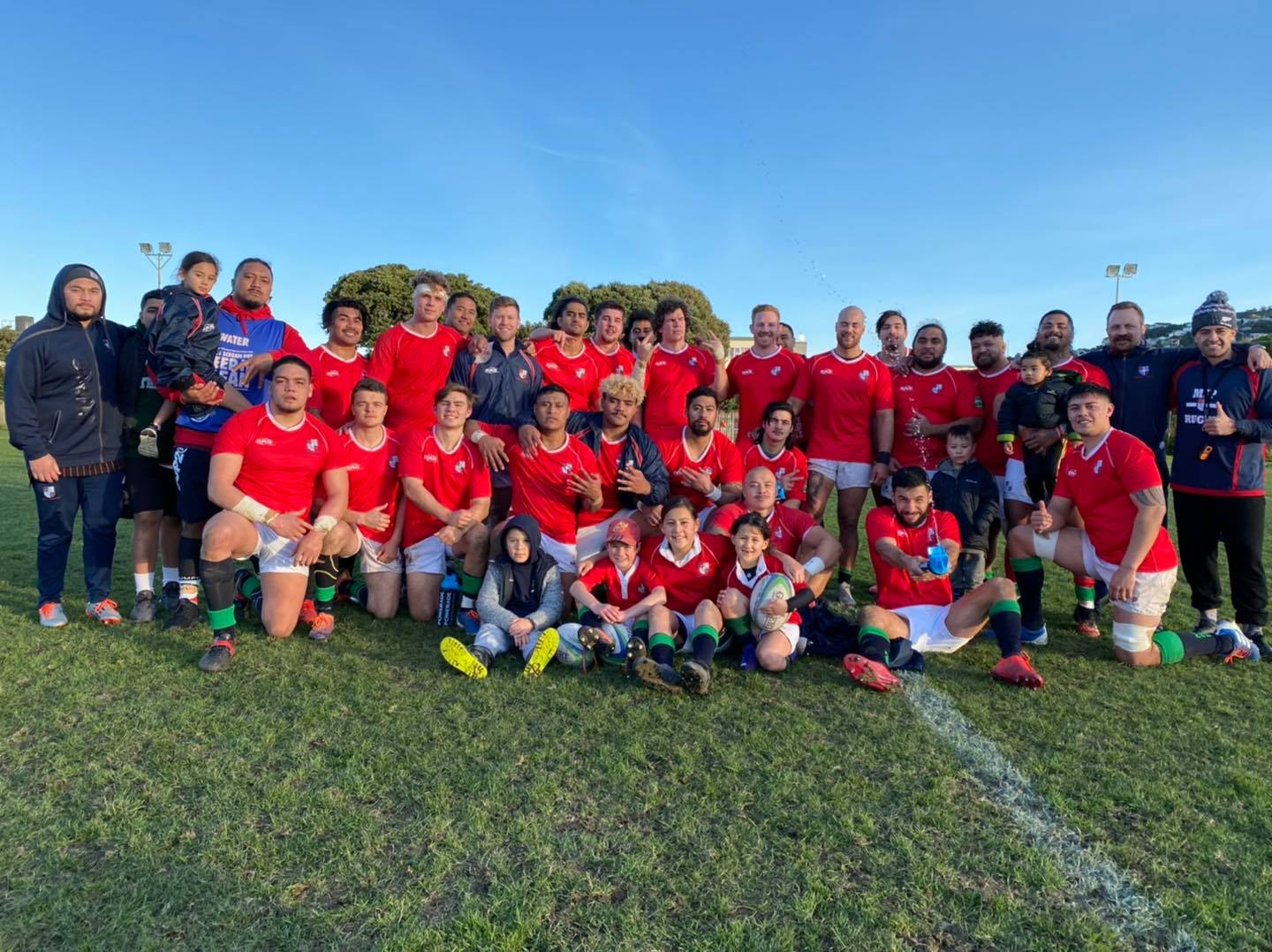 With six rounds of 13 of the 2020 Swindale Shield played, there are four teams locked together at the top of the table on 24 competition points.

Old Boys University, Marist St Pats, Tawa and Petone are the joint leaders, after another tight and willing round of Premier club rugby that saw previous leaders OBU and Tawa both lose close matches and Petone win the famous McBain Shield off Hutt Old Boys Marist.

OBU were beaten by MSP 22-18 at Evans Bay Park, Tawa missed out to Northern United 5-0 in a low scoring thriller at Jerry Collins Stadium, while Petone beat HOBM 32-24 at the Petone Recreation Ground.

There is a 5-point gap at the top of the standings between the current top four to the next best side, defending Jubilee Cup champions Northern United (on 19 points), followed by HOBM (16), Poneke (15), Oriental Rongotai (14) and Wainuiomata (14).

Poneke beat the Avalon Wolves 27-18 at Fraser Park, while Ories beat Wainuiomata 46-19 at the Polo Ground.

Four of the five bottom ranked sides met in a pair of thrillers on Saturday, with the Upper Hutt Rams (12 points) drawing with the Wellington Axemen (7) 19-19 at Hataitai Park and Paremata-Plimmerton (8) beating Johnsonville (2) 23-20 at Ngati Toa Domain.

Johnsonville and the Wolves (2) are the two winless teams in the Swindale Shield thus far.

In some Swindale Shield highlights, there was only one at Porirua Park and that came through a try inside the first 10 minutes to Norths second-five Kienan Higgins.

Norths moved the ball from a ruck on their own side of halfway, in-form flanker Bruce Kauika-Petersen burst up the far touchline and offloaded on his inside shoulder to Higgins who scored in the corner.

The remainder of the match was a litany of missed chances by both teams and a slew of penalties and scrum re-sets, which prevented much flow being established.

Both teams had players cross the tryline at various stages, only to be held up, and Norths hung on to win the ‘Battle of the Bridge’ and the Sammy Saili Memorial Trophy.

Petone’s 61st McBain Shield win over HOBM had plenty of action, from the moment that Petone halfback Logan Henry opened the scoring with a penalty before a slashing break by HOBM centre Tomasi Alosio stunned the home crowd.

Petone captain Jack Ross profited from nimble Tupou Sopoaga hands to crack the Eagles defence. HOBM looked to play with width and speed in the first half and a try out wide to wing Todd Svenson justified that approach and saw a 12-10 lead established.

Up 18-13 at halftime, HOBM changed their strategy to a more ‘around the corner’ method, but found holes hard to find. However, penalties were frequent as the Eagles controlled territory and regained the ascendency.

The winning try was scored by Manaena after a thrust by Fullback Piri Paraone ended narrowly short.

OBU led MSP 15-8 at halftime. after three tries midway through the first half saw Willie Schutz crossing for the game’s first try, followed by OBU scoring from the next re-start and then OBU halfback Kyle Preston scoring a try from a chip kick. OBU advanced their lead to 18-14 through penalties, before MSP hit the lead through a try to James Tuia and then a match-sealing dropped goal to flyhalf Aidan Morgan.

Paremata-Plimmerton were presented with a late penalty try to beat the Johnsonville Hawks 23-20 on their Old Timers’ Day at Ngati Toa Domain.

The Upper Hutt Rams scored a try out-wide late in the game to draw level 19-19 with the Wellington Axemen. The conversion was missed and that was the final score on the Axemen’s Old Timers’ Day at Hataitai Park.

The Rams out-scored the Axemen three tries to two, including one try each to the Svenson brothers, Scott and Josh, but three penalties to Axemen flyhalf Matt Goosen kept the home side in the hunt.

Poneke beat the Avalon Wolves 29-18 at Fraser Park, with No.8 Brandon Feterika in strong form in scoring two tries. Poneke were faster out of the blocks than Avalon, scoring the game’s first two tries and going to a 17-8 halftime lead. Poneke pulled ahead again, before Chris Aumua scored to peg the deficit back to 24-15, before a Tony Smith runaway try sealed victory for Poneke.

Oriental Rongotai were the day’s biggest winners on the scoreboard, beating Wainuiomata 46-19 on their Old Timers’ Day at the Polo Ground.

Ories won six tries to three, with six different players crossing the chalk throughout the contest, these being: Paulo Aukuso, Steven Va’a, John Tuia, Luke Tau'alupe and Jason and Ronaldo Seumanufagai off the bench.

In the Premier Women’s grade, Oriental Rongotai and Northern United continue to set the pace and these two unbeaten teams are on course to meet in the virtual decider of the Rebecca Liua’ana Trophy in the last round in three weeks.

Both took maximum points over competition minnows on Saturday, with Ories beating Avalon 114-0 and Norths beating Poneke by default.

Petone are in clear third place after beating Marist St Pats 44-26 in their fixture at Evans Bay Park. Three players scored two tries each, with Black Ferns No. 8 Jackie Patea-Fereti and tight forwards Hope Sa’u and Angel Ulia all finding the whitewash twice each.

The Old Boys University Impalas caused the minor upset of the round, beating Hutt Old Boys Marist 29-25 at Nairnville Park. OBU came back from 12-20 down at halftime to secure victory, with first-five Montana Heslop and No. 8 Chloe Te Moananui both scoring braces. For HOBM, fullback Tyler Bentley scored a hat-trick but none of their conversions were successful.

Five teams are bunched together and separated by three competition points through five rounds of the Paris Memorial Trophy Colts grade.

Defending champions OBU Green still lead after having their bye on Saturday, while Petone Blue have slipped into second with their 31-17 win over Hutt Old Marist Green who are now a point back in third.

Norths Blue also slipped back after missing out to Tawa 19-17, while Norths White remain in contention after their 36-25 win over Johnsonville.

In other Colts results, OBU Black strode out to a 61-10 win over Poneke and the Upper Hutt Rams beat Wellington 44-10.

The Upper Hutt Rams have taken the competition lead with their 53-19 win over the OBU Scallywags in a top of the table encounter. In other games, Wellington beat neighbours Poneke 38-19 and Eastbourne pipped the Wests Roosters 29-25.

In the Reserve Grade Mike Copeland Trophy, it is Ories and the Upper Hutt Rams J8s alone at the top of the standings on a maximum 25 points through five rounds.

Ories beat the Poneke Ruffnuts 28-19 in a top-of-the-table match, whilst the J8s overcame the Wellington Axemen 26-17.

The Paremata-Plimmerton Punters and the Ruffnuts are third and fourth on the standings, after the Punters beat the OBU Teddy Bears 48-19 in a powerful display.

The UH Rams Thirstys remain in touch with the top four, beating the OBU Righteous Pack 40-17.

In other games, the MSP Internationals defeated the OBU Pink Ginners 28-26 in the closest Reserve Grade match of the day and the Wests Mixed Veges beat the OBU 69ers 26-19. The UH Pirates had the bye.