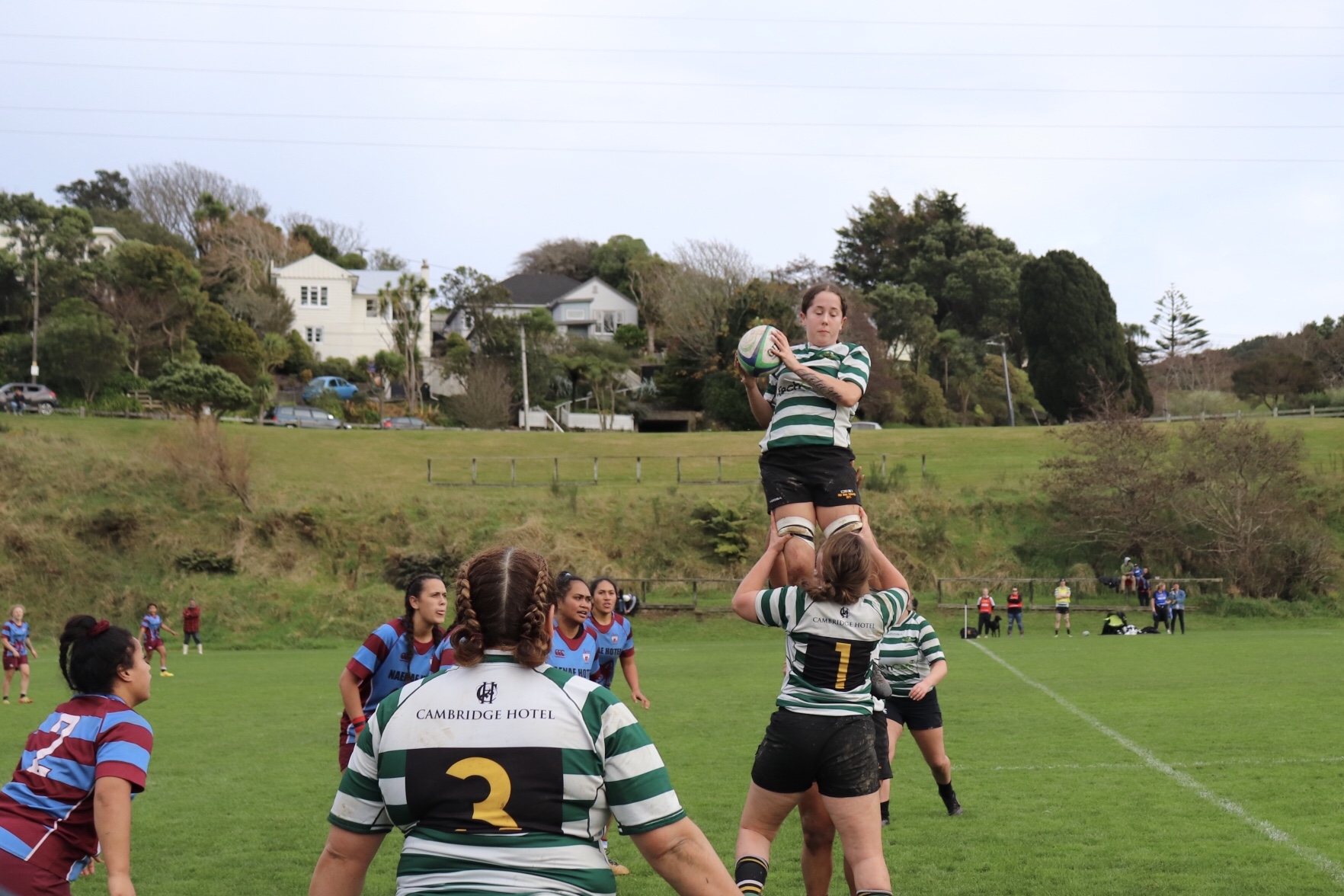 There are four unbeaten teams after the opening fortnight of the 2020 Swindale Shield, with Marist St Pats, Tawa, Hutt Old Boys Marist and Old Boys University all having won both their games of the delayed season so far.

MSP pulled clear of the Upper Hutt Rams in a dominant second half at Maidstone Park after a tight first half that saw both sides largely shadow each other. The Rams kicked early penalties and led 6-0, before two MSP tries and one to the Rams saw the visitors lead 12-11 at the turnaround.

Hurricanes Fletcher Smith and Billy Proctor linked up to score their next try, ushering in a scoring spree that made the game safe for MSP. Centre Isaia Petelo, wing Proctor and halfback Jonathan Taumateine all scored braces in the 61-11 win.

Tawa were playing their first match on their re-laid Lyndhurst Park surface and wasted no time getting into the swing of things against the Avalon Wolves.

Starting with their first try in just the second minute of play, that came directly off a lineout turnover on halfway, Tawa scored seven first half tries to lead 41-3 at the turnaround.

The Wolves rallied in the second spell and were much more competitive and their late consolation try pulled the final score back to 58-10.

Hutt Old Boys Marist earned a 36-17 bonus point win over the Wellington Axemen, after overcoming a brisk start by the home team, HOBM led 5-3 midway through the first half. This was doubled when fullback Tomasi Alosio scored from a backline fumble. A key play was a length of the field intercept try to wing Jordan Glen-Bradbrook and the Eagles led 17-3 at halftime. Alosio crossed for his double early in the second half to extend the lead.

The next 20 minutes was hotly contested, before the Eagles laid on two more tries, to flanker Jordan Gillies and replacement hooker Freddie Sunia to seal their win.

The Old Boys University Billygoats defended the Bill Brien Challenge Shield and won the Ken Douglas Trophy off Northern United in their match at Nairnville Park.

OBU scored just three tries, but the boot of first five-eighth Dale Sabbagh proved telling for the home side. Sabbagh kicked all three conversions and four penalties for 18 points.

At Helston Park, visitors Poneke beat Johnsonville 18-11. Poneke outscored the Hawks three tries to one, with centre Psalms Latu bagging a brace and wing Suitulaga Taulogo scoring their other try.

Ories had both Ardie Savea and Alex Fidow in their engine room, but Paremata-Plimmerton, like the Wellington Axemen and the Upper Hutt Rams, were in the contest for long periods.

Paremata-Plimmerton created plenty of chances and their set-piece was inducstrious but they were unable to convert pressure into points. Ories absorbed this and turned their opportunities into points and led 22-3 at halftime.

The second half started off as a continuation of the first, before  Ories broke the shackles in the fourth quarter and ran in more tries. They scored eight tries all up, with replacement back Ethan Webster-Nonu scoring twice and Savea scoring a popular try.

Last but certainly not least, Wainuiomata sealed a 28-23 win over Petone in dramatic circumstances at William Jones Park, to retain the Darren Larsen Cup for a tenth consecutive year.

Petone were behind most of the match, but levelled the scores at 23-23 with just a couple of minutes to play through a try to midfielder Tom Carter.

From the next re-start, Wainuiomata flyhalf Ruben Love kicked deep into the in-goal. Two Petone players converged on the ball but neither seized on it to force a 22. Instead, Wainuiomata reserve Trei Mu poured through to score the winning try.

Mu lunged at the ball and forced it down for one of the most dramatic tries ever seen at William Jones Park. With the scoreboard clock showing 43:00 Petone regained the kick-off but lost the ball after half a dozen phases, 35-metres out from the line.

Earlier, Wainuiomata lock Tutasi Masoe scored two tries to help put his side ahead. Petone first-five Carne Green found a hole and scored a try to close the gap to 17-10 at halftime.

Tyler Tane was able to extend Wainuiomata’s advantage to 20-10, but the Petone reserves added some punch and claim and two Green penalties reduced the deficit to 20-16. With six minutes left Tane was on target from 35-meters out at which point the result seemed settled at that point.

Ories and Avalon are the two unbeaten teams in the Rebecca Liua’ana Trophy after both winning their second straight matches, but in contrasting circumstances.

A 13-player Avalon held off a fast-finishing Old Boys University at Ian Galloway Park in winning 31-28. The match was scoreless for most of the first half before Avalon’s first try to Caroline Sio gave them a 7-0 lead.

The Impalas quickly drew level, with centre Thamsyn Newton scoring the first of her three tries, before Avalon scored four more tries to lead 31-7. With Avalon down two players through injury, OBU replied with three tries of their own but the fulltime whistle had the final say.

Norths had the bye.

The second round of the Premier Reserve Harper Lock Shield largely fell with expectations with a number of big margins and one nail-biter. The latter was at Helston Park where Poneke managed to go two from two, but not without being pushed hard by Johnsonville before prevailing 31-25.

Also keeping their records perfect were Norths, Ories, Petone A, Tawa, and MSP. Norths beat OBU 57-29, Ories accounted for Pare-Plim 36-10, Petone beat Wainuiomata 48-18, and Tawa saw off Avalon 48-7, while HOBM got on the board with a 67-8 win over the Petone Brotherhood.

Defending Premier Reserve champions MSP beat Stokes Valley 72-7 in the sole late kick-off the round, pulling clear in the second half.

The first round of matches of the Colts Paris Memorial Trophy competition saw a draw, three close wins and a thrashing from the five games played.

The draw was at Ian Galloway Park between the defending champions OBU Green side and Norths Blue. The two teams ended in a 26-26 stalemate, both scoring four tries and taking 3 points from the game.

Poneke and Petone were first round bonus point winners, Poneke beating the Johnsonville Hawks Colts 28-17 and Petone accounting for Wainuiomata 83-0,scoring 13 tries and kicking nine conversions after leading 43-0 at halftime.

A sixth match between the Upper Hutt Rams Colts and MSP was cancelled on Friday, with MSP withdrawing their team from this grade late last week. Norths’ second ‘White’ team had the first round bye.

In the opening week of the U85kg JC Bowl competition, the OBU Scallywags beat the HOBM Howlers 28-14, defending champions Avalon beat Eastbourne 19-18, MSP pipped Poneke 27-24 and the Upper Hutt Rams and the Wests Rooster met in the other fixture.

The Reserve Grade also kicked off, with a full round of six matches. In the battle of the two Upper Hutt Rams teams, the J8s beat the Thirstys 33-36. Ories beat the OBU Pink Ginners 25-10, the Axemen beat the OBU 69ers 47-5, the Pare-Plim Punters beat the MSP Internationals 31-17, the Wests Mixed Veges overcame the OBU Teddy Bears 10-7 and the Poneke Ruffnuts met the Upper Hutt Rams Pirates.