Exciting rugby to continue in seventh round 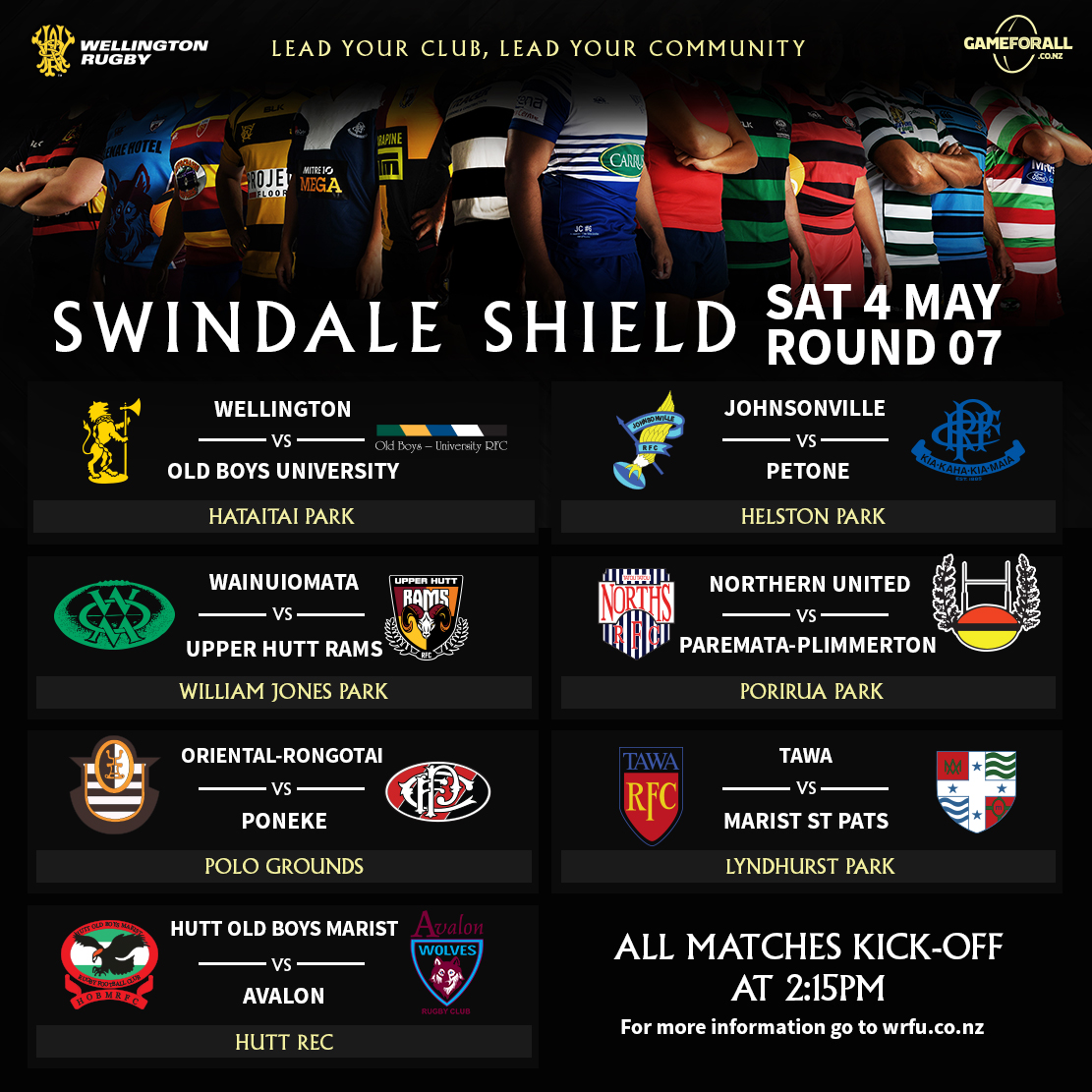 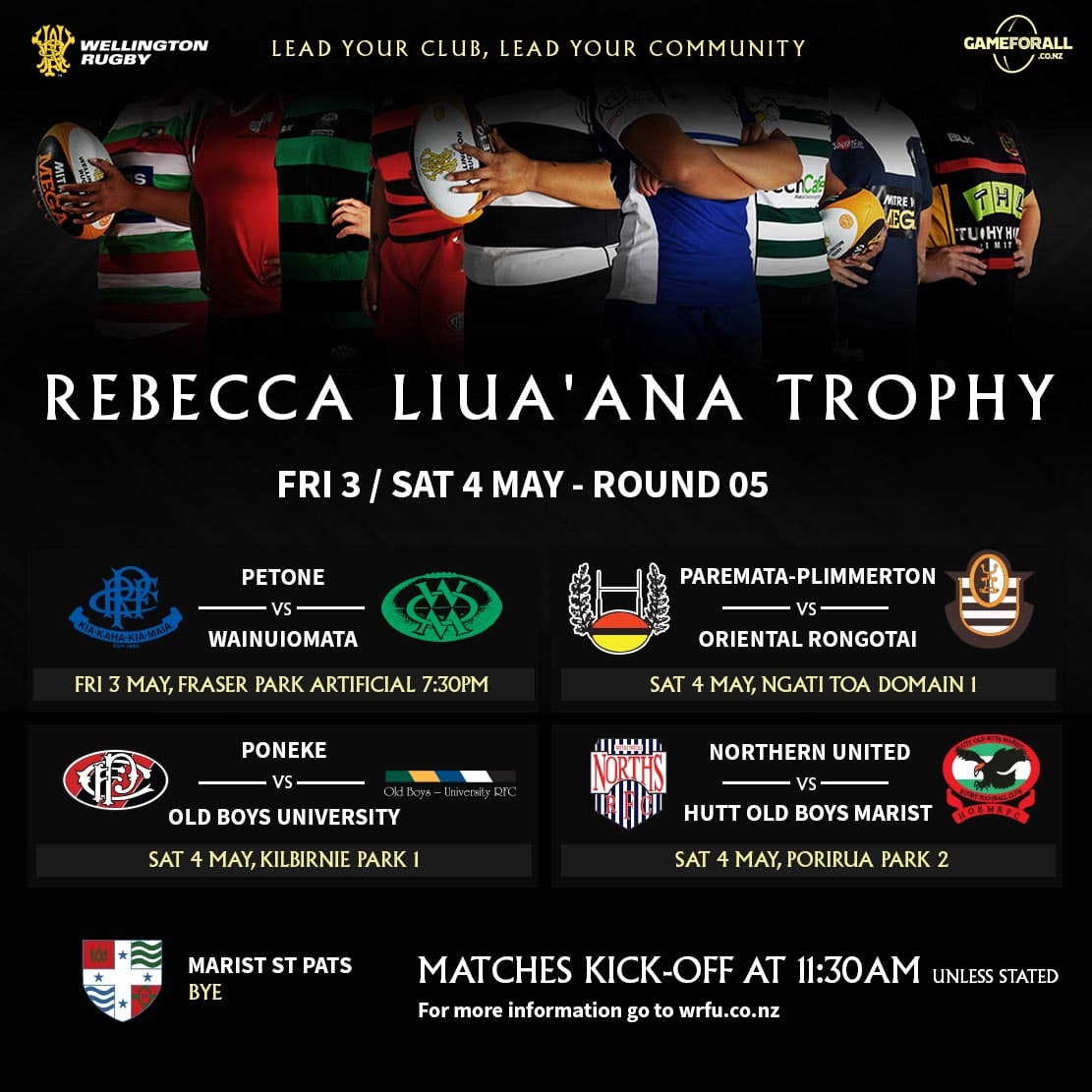 Another tight and willing round is predicted in the Swindale Shield this Saturday, with several teams fighting for the mid-table positions and the Hutt Old Boys Marist Eagles out in front and yet to taste defeat.

The feature match of the seventh round of the competition is the Jim Grbich Memorial Shield between Oriental-Rongotai and Poneke, which is also a battle between the second and third placed teams. Ories will also be defending the Bill Brien Challenge Trophy after winning it from Northern United last weekend. There are also several other matches for interclub trophies this week. Radio Sport will have commentary of this match at the Polo Grounds on 1503am and Radio Sport Extra on iHeart Radio.

Te Upoko o Te Ika will have commentary of Wainuiomata v Upper Hutt Rams at William Jones Park on 1161am and TuneIn Radio.

There is also a top of the table feature match in the Premier Reserve Harper Lock Shield competition between defending champions Marist St Pats and Tawa at Lyndhurst Park. MSP are unbeaten through six rounds, while Tawa have lost once so far (to Norths 26-31).

Joint second placed Norths host Paremata-Plimmerton, so could leapfrog both MSP and Tawa into top spot on points difference defending on how these matches play out. Similarly, fourth placed the Upper Hutt Rams could advance their position should they beat Wainuomata who have won three and lost three so far.

The Division 1 Colts sees OBU Green and Marist St Pats as the joint leaders after three rounds, and both these teams will be favoured to win against lower ranked teams away from home. OBU face Petone and MSP play winless Tawa. The other two Paris Memorial Trophy matches are between Paremata-Plimmerton and Norths, and HOBM and the Rams.

There is also an early season top of the table fixture in the Division 2 Colts competition between unbeaten pair Ories and Poneke at the Polo Ground.

The fifth round of the Women’s Rebecca Liua’ana Trophy kicks off tonight under lights at neutral Fraser Park between Petone and Wainuiomata. Petone are coming off a win over Hutt Old Boys Marist, while Wainuiomata defaulted.

Northern United host HOBM at Porirua Park, where the latter will need to find a way to crack their defence that has conceded just one try in three matches.

In the other match, Ories will be favoured to beat Poneke in the early match of the day on the Polo Ground.

The three women’s matches tomorrow are all at 11.30am, but all senior matches in the afternoon have been brought forward 30 minutes owing to the Hurricanes match at the Stadium. Kick-off times are 12.30pm and 2.15pm respectively tomorrow.

A look at the seven Swindale Shield games is below:

Both clubs are on a serious roll. Ories tipped over Norths on the road last week with Malo Manuao scoring 17 points and Paula Kinikinilau and Paulo Aukuso turning back the clock in the centres. Both remain in the 22 tomorrow, but are part of a backline tweak that includes Trent Renata returning from injury to fullback. At the other end of the line-up, Xavier Numia comes in to loosehead prop.

The winner of this fixture could go top of the Swindale Shield if the Eagles were to stumble.

Both teams boast similar strengths, but often the conditions dictate the way things go at the Polo Ground. If the wind whips up anything is liable to happen. A big eastern suburbs crowd is expected.

The two teams play for the Jim Grbich Trophy. Grbich was a regular Wellington and New Zealand Maori representative who played for Poneke throughout the 1950s and early 1960s before tragically dying in a late night car accident near the Tawa motorway interchange aged 31.

Wellington had their biggest win in several years when they beat an understrength Johnsonville 86-5 last Saturday. The Axemen scored 14 tries with impressive lock James Poloniati celebrating a hat-trick.

OBU battled to a grim 15-10 victory over MSP with Teariki Ben-Nicholas scoring a double.

There are only five points separating the two clubs on the table. Can Wellington produce a boil over and push for the Jubilee Cup?

OBU’s stocks have been depleted, but the Goats should still have enough depth to prevail. New loose forward Sam Godwin has proven to be a quality asset and Morgan Poi is slowly returning to his best. Agustin Escalona and Jonathan Fuimaono both return to their team for this match as well.

Watch for fullback Eremia Tapsell who has scored a fifth of Wellington’s tries this season.

In recent seasons, Petone’s form has dipped dramatically after the McBain Shield. Last year Petone went pointless in their last three games to drop down to the Hardham Cup.

Though the Villagers gained a four try bonus point, they were well beaten by the Eagles in a serious wake up call.

Johnsonville had 10 players play two games last weekend. There were 18 in total injured or unavailable across their top two sides. This one could be a game changer if the Hawks can beat a smarting Petone outfit who are still well in the hunt to reach the Jubilee Cup.

This is a massive mid-table clash. The Upper Hutt Rams have won their last two games to climb into Jubilee Cup contention while Wainuiomata are on the skid, suffering two defeats in the last fortnight.

Wainuiomata were tamed by Tawa. Peter Umaga-Jensen was strong in the midfield and interestingly Marvin Karawana, an ex inside back, played blindside.

This will be tight with Upper Hutt looking to play away from the abrasive hosts forwards.

The two teams play for the Peter Jones/Dave Ritchie Cup.

Norths lost a thriller to Ories, but should bounce back against Paremata-Plimmerton in this match which is for the Ivan Hargreaves Trophy.

Norths will be playing in the former Porirua RFC club jerseys, in the first of two Heritage rounds for Norths.

Marist St Pats rallied bravely in the last quarter, but fell short against OBU leaving the traditional powerhouse in serious danger of dropping down to the Hardham Cup.

MSP only have a single win in 2019, but five bonus points has them just four points outside the top seven.

MSP’s roster is relatively settled, but the likes of Wellington Lions James Tuia and Billy Proctor need to step in more to break the drought. Veteran Fa’atonu Fili starts off the bench for this one as well.

Tawa hit their straps against Wainuiomata with Kemara Hauiti-Parapara dotting down twice.

The Eagles are soaring with an unblemished 6-0 record and the McBain Shield safely retained.

Glen Walters and Fereti Soloa each nabbed a pair and Jack McCormack is back in Wellington after a period in Christchurch, producing strong performances.

Avalon were genuinely competitive against Poneke with tomorrow’s right wing Chris Aumua featuring twice on the scoresheet, but the Wolves lacked the long term bite to succeed.

Avalon are still in the Jubilee Cup hunt, but will have their work cut out trying to end the Eagles unbeaten run. Thomas Waldrom lines up at No. 8 and he could be a key player if he gets up a full head of steam.

The two sides are contesting the Billy Herbert Memorial Trophy in this match.