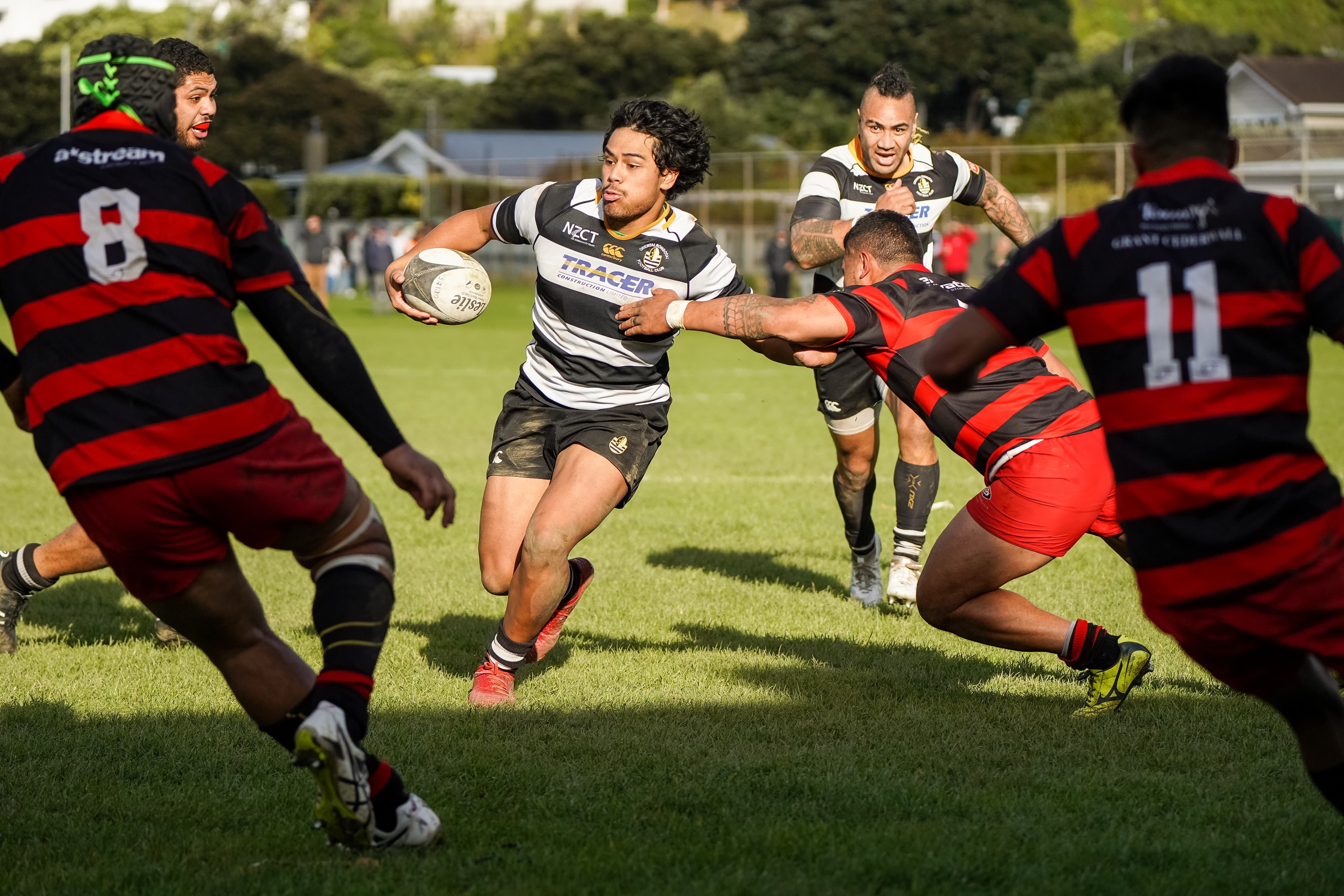 In dry, windy conditions throughout the region, the HOBM Eagles overcame a tough first half challenge from the Avalon Wolves to beat them 35-22 at home at the Hutt Recreation Ground, while Ories edged out Poneke 21-15 at the Polo Ground.

Elsewhere, Marist St Pats took down Tawa 46-29 at Lyndhurst Park to register a vital win, while also serving to officially send the HOBM Eagles into this year’s Jubilee Cup.

With three rounds to play, leaders HOBM have a 17-point buffer to eighth placed Tawa. There are also 10 points separating fifth placed OBU and 12th placed Wellington, meaning these eight teams have much to play for over the final three weeks of this year’s first round competition in the battle for the top 7 / bottom 7 positions for the second round.

No. 8 Thomas Waldrom opened the scoring for the Wolves, before the Eagles replied with two quick tries with the wind in their favour. Avalon scored again before the break to trail just 12-14. The Eagles were able to score two more fast tries soon after the break that proved enough for them to retain the Billy Herbert Memorial Trophy.

Ories took a 7-5 lead into halftime against Poneke, with a try to centre Malachai Unasa answered by one to Poneke wing Nick Roberston.

Ories sent first five-eighth Malo Manauo over the chalk early in the second half after a build-up off an attacking scrum. Poneke cut Ories’ lead to 14-8 with a penalty, but Ories centre Unasa intercepted a Poneke pass and raced through to score to clinch victory. A late try to Poneke lock Cole Stewart gave them a bonus point.

At Lyndhurst Park, MSP won the game against the Tawa with a stirring first half. MSP’s pack climbed into their work in hungry fashion and as a result it was one-way traffic as they led 29-7 at halftime.

Defensively, MSP then withstood a big period of pressure just before and after halftime, before first five-eighth James Proctor kicked a 50 metre penalty to extend their lead to 32-7.

Tawa then came roaring back into the match and closed the deficit to 24-32. However, MSP were able to score again for a 15-point buffer. Tawa replacement Peniasi Tokakece crossed to make it 39-29, but MSP halfback Jack Taulapapa scored a late runaway try to seal victory.

Three of the other four Swindale Shield games on Saturday each followed similar patterns to the HOBM-Avalon one, with the winning margins and scores blowing out in the second halves.

At Porirua Park, Northern United celebrated the first of its heritage days, wearing the colours of the former Porirua RFC, against Paremata-Plimmerton.

Right wing Losi Filipo scored early for Norths, but Paremata-Plimmerton replied through centre Jonathan Sabo to make it 5-5. It wasn’t until the stroke of halftime that Norths scored again through No. 8 Luca Rees to give them a 10-5 lead at the break.

The second half saw Norths fly in to score a further eight tries, with Rees finishing with four tries himself. Norths went on to win 58-5 and they retained the Ivan Hargreaves Trophy.

At Hataitai Park, the Old Boys University Goats were pushed hard by the Wellington Axemen. OBU established a 3-0 lead, before eventually scoring their first try to wing Trevahn Ta'ufo'ou, after a lineout error by the Axemen.

Prop Morgan Poi scored for the Goats immediately before the interval to give them a 17-0 buffer. The Axemen then came back to 17-10 through a try to lock James Poloniati and a penalty, but the Goats skipped clear to win the match for the Dean Gifford Memorial Cup 36-10.

At Helston Park, Johnsonville had first use of the wind and tailed 10-14 at halftime, but the Petone Villagers were able to pull clear in the second 40 minutes to score seven tries to win 45-10. Right wing Willie Fine scored two of seven tries, while Johnsonville centre Waisea Yabakivou scored all their points.

At William Jones Park, the scoring was often fast and loose as Wainuiomata beat the Upper Hutt Rams 58-25 for the Peter Jones/Dave Ritchie Cup.

Wainuiomata maintained dominance throughout the first half as they flew to a 31-6 by halftime.

The Rams staged a comeback in the second half, but basic lineout errors proved costly. The home team sealed the result with a storming run by second five-eighth Peter Umaga-Jensen and then a 50-metre penalty to fullback Josh Robertson-Weepu.

In the fifth round of the Women’s competition, there were big victories for all four winners.

At Ngatitoa Domain Ories made a fast start in beating Paremata-Plimmerton 47-10. Ories scored a hatful of early tries to put the result beyond doubt. Black Fern Ayesha Leti-L’iga crossed for five of their nine tries.

MSP had the bye in the Women’s grade.

In Division 1 Les Mills Colts Paris Memorial Trophy matches, MSP made it four from four with their 53-10 win over Tawa, while OBU Green also took their fourth straight win by beating Petone 26-12.

In the other two Division 1 matches, HOBM Green defeated the Upper Hutt Rams Colts 26-14 and Norths edged Paremata-Plimmerton the Year of our Lord 19-18.

Johnsonville had a 24-22 win over Wainuiomata in Colts Division 2, while OBU Black beat Wellington 39-24 and Ories beat Poneke 28-7.

In the U85kg JC Bowl, last year’s championship finalists the Upper Hutt Light Rams and the Avalon Hungry Wolves both earned their fourth straight wins. The Rams beat MSP 36-20 and the Wolves defeated the HOBM Howlers 21-17.