Crunch eighth round in club rugby 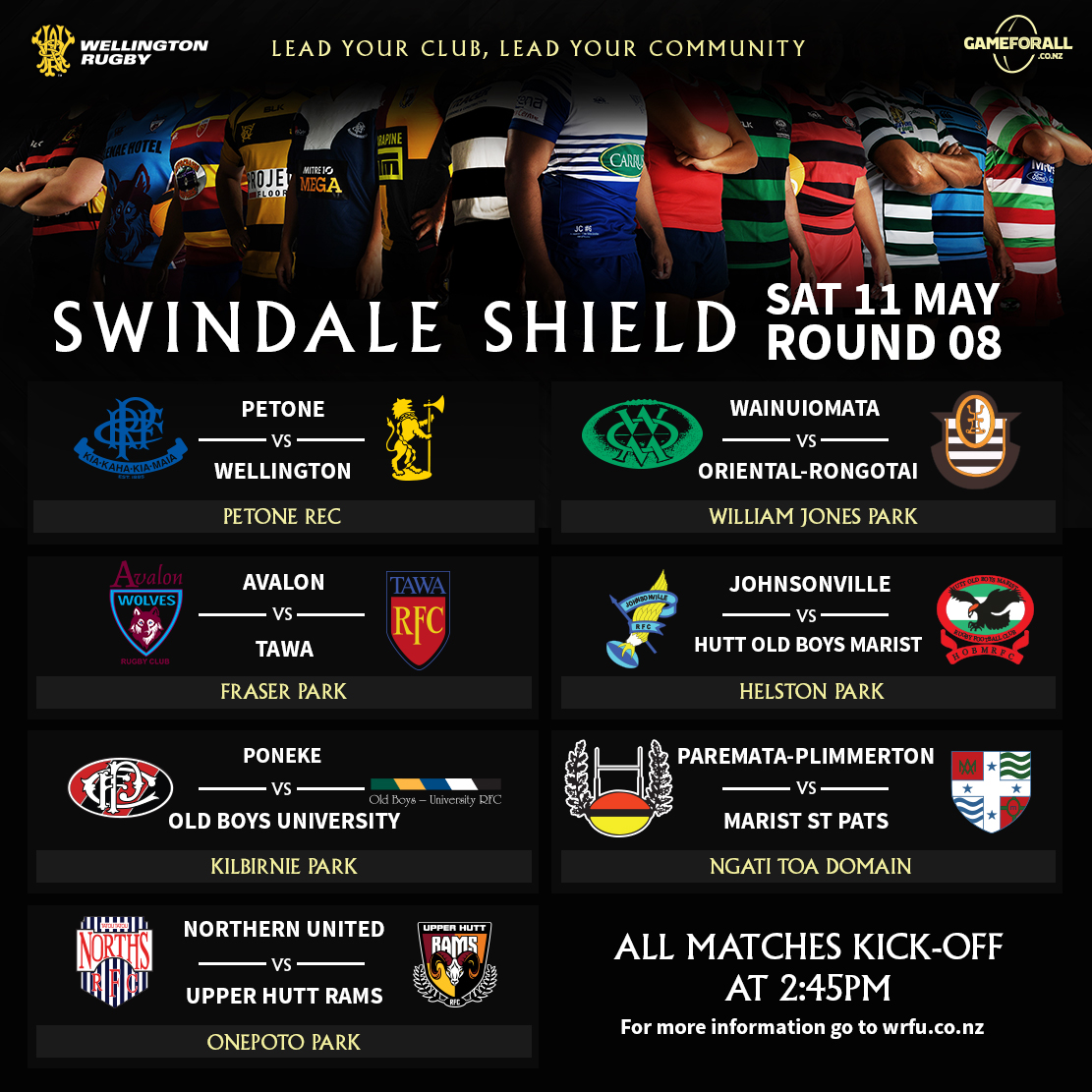 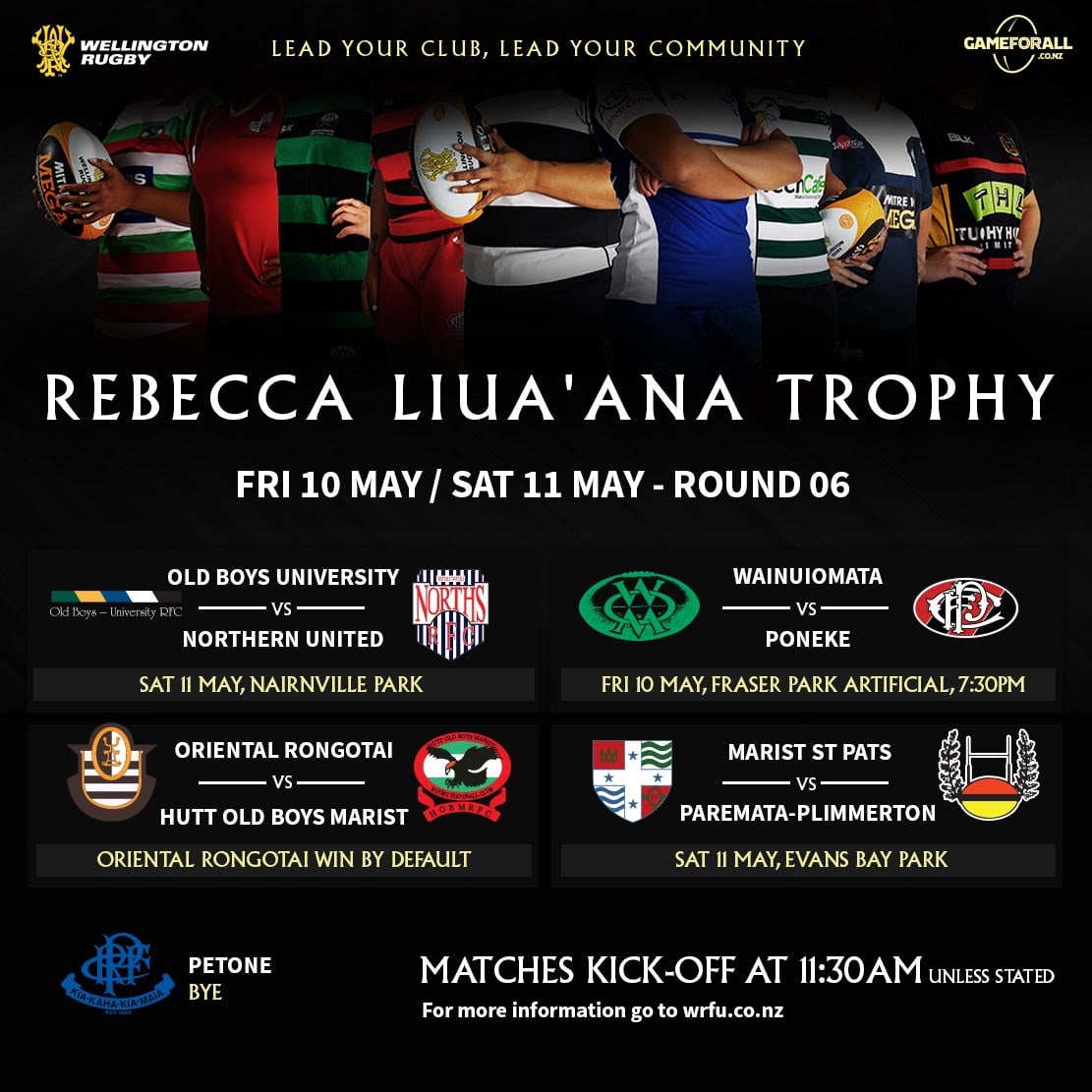 Tomorrow’s eighth round of the Swindale Shield looms as a crunch one for the majority of teams, with four teams realistically still in with a chance of winning the first round title at the head of the standings and still 11 teams all up still alive fighting it out to finish inside the ‘top seven’ and qualify for the second round Jubilee Cup.

The only certainty from tomorrow’s set of matches is that the top four won’t change, with unbeaten Hutt Old Boys Marist (34 points), Ories (30), Northern United (29) and Poneke 26) holding a buffer to a group of three teams on 20 points.

At the top of the standings, leaders HOBM will put one hand on the trophy if they beat Johnsonville. Mid-table, there are eight teams separated by 10 points.

There is a top-of-the-table clash in the Division 1 Colts competition at Ian Galloway Park at 1.00pm between unbeaten Old Boys University and Marist St Pats.

Norths host the Upper Hutt Rams, while the other two fixtures are in the Hutt with Petone playing Paremata-Plimmerton and Hutt Old Boys Marist playing Tawa.

Ories are on maximum points in Colts Division 2 and they travel to play Wainuiomata at Mary Crowther Park.

The eighth round of the Harper Lock Shield sees unbeaten leaders Marist St Pats meeting Paremata-Plimmerton in the early game at Ngatitoa Domain. MSP are two points clear of Northern United at the top of the standings, with Norths expected to have a tougher clash against fourth placed Upper Hutt Rams at Onepoto Park.

Third placed Tawa meet 10th placed Avalon and would join either Norths or the Rams as Harper Lock Shield title contenders should they win and MSP stumbles.

The fifth round of Women’s Rebecca Liua’ana Trophy games will likely see no change at the top, with Ories out in front but yet to have their bye, but third placed Norths (who have had their bye) primed to move into clear second ahead of Petone who have their bye tomorrow. Oriental Rongotai win by default against Hutt Old Boys Marist. All Women’s matches are at 11.30am.

The Upper Hutt Rams and Avalon are the two unbeaten teams after four rounds of the first round U85kg JC Bowl competition. The Rams play Eastbourne on Maoribank Park at 2.45pm and Avalon are away to Johnsonville at Onslow College at the same kick-off time.

A look at each of the seven Swindale Shield games tomorrow is below.

Wainuiomata burst to life last weekend, thumping Upper Hutt 58-25. Peter Umaga-Jensen scored three tries and TJ Va'a two in a display that showed the promise the youngsters have failed to exhibit due to injury.

Ories battled past Poneke 21-15 and are only four points shy of the Swindale Shield lead. Malachai Unasa blossomed again with two tries, and he starts in the midfield with the experienced Malachai Unasa in this game. Trent Renata at first five-eighth is also a change to their line-up to look out for.

Ories have scored 38 tries compared to Wainui’s 29 and have the best defence in the competition.

This is huge for Wainui as a loss will send them back to the bottom half of the table.

Game of the round right here.

On present standings Petone would be the last team to advance to the Jubilee Cup, but were in the same position last year only to drop down in the final round.

Wellington are out of contention on 10 points, but an upset of MSP this season will have the Villagers weary.

The Axemen have made a few tweaks to their side, particularly in the backs. Isaac Bracewell starts at first five-eighth in one change there. Hurricanes flanker Sam Henwood is a welcome addition to their pack.

This is for the Jack Francis/Jack Taylor Trophy. Petone won this 55-0 last year, with No. 8 Tupou Sopoaga scoring four tries.

Tawa are three points outside the top seven after a fourth loss in 2019 last Saturday.

Slow starts have hurt Tawa this year and Avalon, who led the table topping Eagles at halftime and pushed Poneke hard the week before, will enter with some optimism.

Pepesana Patafilo scored two tries for Tawa against MSP and looks an even better player after his stint in the Waikato. He moves in one spot to second five-eighth for this one.

The Waldrom brothers were both on the scoresheet for the Wolves last Saturday and bring out the best in the youngsters around them. Scott starts at No. 8 tomorrow.

Tawa will look to take the win, but another sluggish take off could see them playing Hardham Cup.

HOBM remained unbeaten last Saturday evening after reversing a halftime deficit to topple Avalon 35-22. Johnsonville were better than what they have been in previous weeks, but were still soundly beaten by Petone.

The Eagles will look to take the win against the Hawks with a chance to take maximum points and to put one hand on the Swindale Shield with Ories to Norths to follow. Captain and halfback Sheridan Rangihuna and No. 8 Lise Soloa are sitting this one out, but James O’Reilly returns to start at hooker. For Johnsonville, Jacob Walmsley comes in from the outside backs to start his first match at first five-eighth.

Poneke beat OBU in the Jubilee Cup round last year and with a 5-2 record will fancy their chances of a repeat.

OBU are on 20 points, but still in danger of the drop.

The loose forward battle will be immense with the experience of Greg Foe and Galu Taufale marking up against Teariki Ben-Nicholas and youngsters Shamus Langton and Caleb Delany. OBU also have firepower on the bench, with Paddy Carter and NZ U20 lock Taine Plumtree both riding the pine.

These two teams play for the Beet Algar Rosebowl, after the popular Poneke and Wellington midfielder of the 1920s. OBU are the holders after beating Poneke 55-10 in the first round in 2018.

MSP scored a great win last weekend when they beat Tawa 46-29 away from home. MSP are four points outside of the top seven with three rounds remaining. The likes of James Tuia, James Procter and Valentine Meachen finally found the type of form more familiar to the Evans Bay Park faithful.

MSP have rested a few players from the starting XV for this fixture, including Meachen and prop Tietie Tuimauga who are both held back in reserve for later in the game.

There is too much at stake for MSP here for this fixture to produce an upset.

Norths are third in the Swindale Shield standings and have an outside chance of retaining their crown, especially if they continue scoring big. Norths have scored more tries (44) than any side in the competition.

Upper Hutt are six points outside the top seven and are reeling after a loss at the hands of Wainuiomata.

Sio Luamanu has returned from overseas to the Rams pack, but his brother Lui has not been named for tomorrow. Dan Schrijvers, normally a loose forward, has been named at centre.

Norths have made a handful of changes for this match too, including Dudley Parsons coming into first five-eighth for the first time this season.

Norths only converted one of 11 tries against Para-Plim.

These two teams play for the Terry Farrow Memorial Cup. Farrow had an instrumental role in the merger of Porirua and Titahi Bay, and was later made a Life Member of Norths before his passing in 1999. This match is being played at Onepoto Park and Norths will be wearing former Titahi Bay colours.