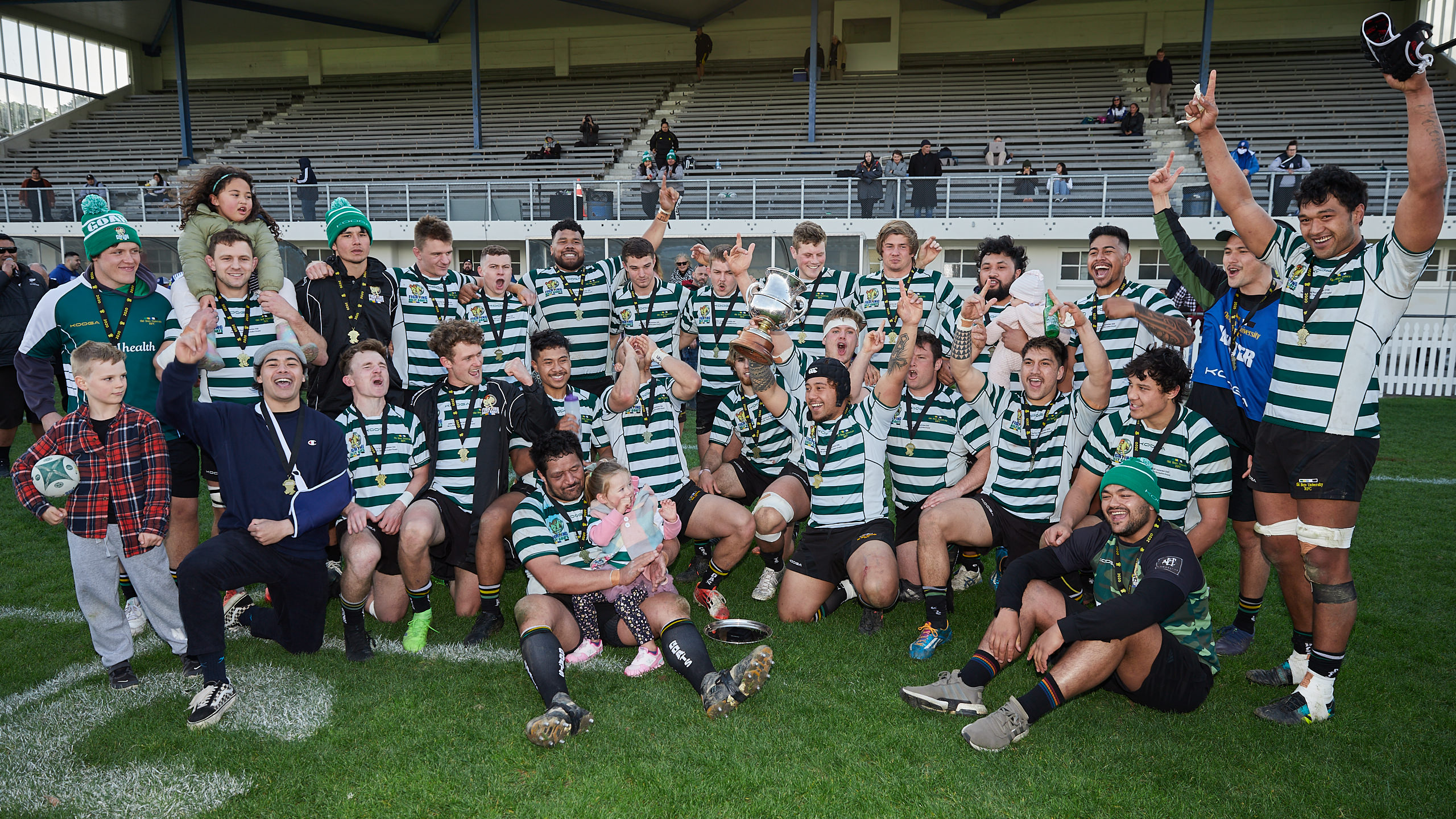 The COVID-19 restrictions were lifted, and large, enthusiastic crowds descended on the Petone Recreation Ground on Saturday for Club Finals Day.

Old Boys University beat last year’s winners Northern United 22-14 in the Jubilee Cup Final, lifting the title for the fourth time since their breakthrough win in 2015.

Fourth qualifier OBU, led two converted tries to nil at halftime and held off Norths throughout the second half to win the spoils.

Old Boys University won three finals on the day. Their Colts Green side defending the John E Kelly Memorial Cup title with a 24-13 win over Northern United Colts Blue in the curtain-raiser on the No. 1 field and their Premier Reserves beat Poneke 30-15 to win the HD Morgan Memorial Cup.

Other results saw the HOBM Green Colts beat OBU Black 28-24 to claim the Vic Calcinai Memorial Trophy and Stokes Valley edging Johnsonville 20-16 in the final of the Johnsonville Centennium Cup.

For the second week in succession, Old Boys University’s resolute defence and greater accuracy on attack won the day, OBU taking their chances well in beating Norths to win the 2020 Jubilee Cup.

Played at breakneck speed, both sides gave the ball air and moved the ball early as neither were going to die wondering.

OBU first-five Dale Sabbagh opened the scoring with a long-range penalty, before fullback Sam Reid finished off in front of the scoreboard to run in the first try of the game. OBU attacked up the shortside from a scrum and second five Callum Harkin shot through a gap to set up the try to Reid who flew in untouched. Sabbagh converted from out wide to make it 10-3.

Norths could have scored twice in as many minutes, but two breaks were snuffed out in the right corner, both involving fullback Johnny Teleaga who was playing his 100th Premier game. Another chance went begging for Norths, who on another day could have been ahead at this stage.

Sabbagh was named the Jim Brown Memorial Medallist as Player of the Final. He pulled off two try-saving tackles in the second half and guided his side around the paddock with authority. However, it was a quick dummy and dash on halfway that provided his biggest moment. Sprinting 30-metres clear, support from lock Taine Plumtree put the exclamation mark on the try of the match. Sabbagh’s conversion had the Billy Goats 17-3 ahead at halftime.

Norths hit back hard after halftime and first five Sam Clarke landed two out of three penalty attempts to reduce the deficit to 17-9. OBU hooker Kenan Gillson was yellow carded. Despite being a player down, OBU to venture back inside Norths territory and lock James Poloniati scored a try from close range try to make it 22-9.

One more, Norths had their chances but failed to execute. Clarke, Luke Bowden and Luca Rees all made breaks that led to nothing.

With about five minutes remaining, replacement wing Te Kahui Bishop scored in the corner, but it was too little too late.

The Hardham Cup was a tense affair and could have gone either way right up to the end.

In a hotly contested – albeit messy and mistake-ridden – decider both sides had periods of ascendancy, but it was Wainuiomata who emerged on top by the time the final whistle was blown.

Wainuiomata started the final with purpose and hunger and were rewarded with the game’s first two penalties to go 6-0 up with over 20 minutes played.

HOBM rallied and it was their turn to dominate territory and possession for most of the rest of the first half. They went close to scoring but were held out by desperate defence and more than one big turnover inside the 22. They should have crossed the whitewash after a 5-metre scrum and a concerted period of phase play but came up short.

They finally crossed with about 5 minutes to play before halftime. After a penalty and lineout in the far corner, the forwards picked and drove at the line like before, but this time they unleashed the backs by ripping a pass across the posts to centre Tomasi Alosio who off-loaded to left wing Fereti Soloa who crossed unchecked to score.

Second five Brandyn Laursen kicked the conversion and the Eagles led 7-6 at halftime.

Wainuiomata then scored the next try, which proved to be the match-winning try.

From an attacking scrum in centre-field, Wainuiomata second five-eighth Tyler Tane punched hard at the line, Wainuiomata recycled possession and after a couple of pick and drives, openside flanker Sam Smith crossed for the try that put them up 14-10.

Wainuiomata won a penalty 35 metres out and second five Tyler Tane missed just as the wind picked up. But moments later he had another shot from further out and slotted this to put the green and blacks up 17-10.

The Eagles had to score next, and they duly did so. Counterattacking from halfway after a Wainuiomata hack down field off a spilt ball. First five-eighth Pakai Turia started the play from 40 metres out and three phases later centre Alosio grubbered behind the advantage line for replacement Fritz Rayasi to re-claim and then from the next play replacement back Francis Tunuvasa ran in to score.

The conversion from 15 metres to the left of the uprights was missed, and Wainuiomata held a 17-15 lead, which they would not relinquish.

In the first game on the No. 2 field, veteran MSP first five Fa’atonu Fili still showed he is a class act, helping to steady his side’s ship after an early Norths onslaught and then having a direct hand in two decisive tries – with a cross-kick and a no-look pass both working a treat.

With a bigger pack and an unbeaten record, Norths started the final in the ascendancy, climbing into their work through their scrum and committed cleanout work at the breakdowns.

But MSP withstood this, and their reply was to score twice midway through the first half. Both were scored after long, patient build-ups and the second was scored after a Fili cross-kick to his waiting wing who beat Norths defender Liki Siliga in the air.

Siliga more than made up for his error when he pounced on an error, shrugged off defenders and sprinted 60 metres up the touchline to score for Norths to close the gap to 5-12 at the break.

Norths had the wind advantage in the second spell, and scored first off an attacking scrum, to narrow the gap to 10-12.

But MSP continued to throw caution to the wind, scoring two long-range tries in quick succession to extend their lead to 22-10. Both tries were scored in the same far corner, Fili, centre Jay Cameron and fullback Shane Thompstone involved.

MSP rode their advantage to the end, as both sides emptied their benches. They ended the game hot on attack and awarded a penalty, Fili kicked a penalty with the last play of the game to seal victory.

The Colts final saw OBU Green win 24-13 in a tight match. Ahead 10-5 at halftime Norths was restricted to a solitary penalty in the second-half as the students used the breeze, staunch defence, and a superior scrum to hold Norths off.

Norths captain and centre Misi Faimalo threw a skip pass to Tana Tusa to open Norths account and just before halftime he set fullback Luke Kapene free down the grandstand touchline. A chip, chase and tackle earned Norths a five-metre scrum and then the same pair combined again with Kapene scoring after a spectacular dive in the opposite corner.

The pressure of the OBU scrum, and some intelligent tactical kicking, gradually wore Norths down. The Norths attack became individual and inaccurate. Champion kicked two more penalties from four attempts while the Goats’ second-half try was scored by Isaac Wilsona after a blindside break by fellow wing Josh Morgan-Ranui.

Congratulations to all of our grade champions for 2020: