All teams underway in second round this weekend 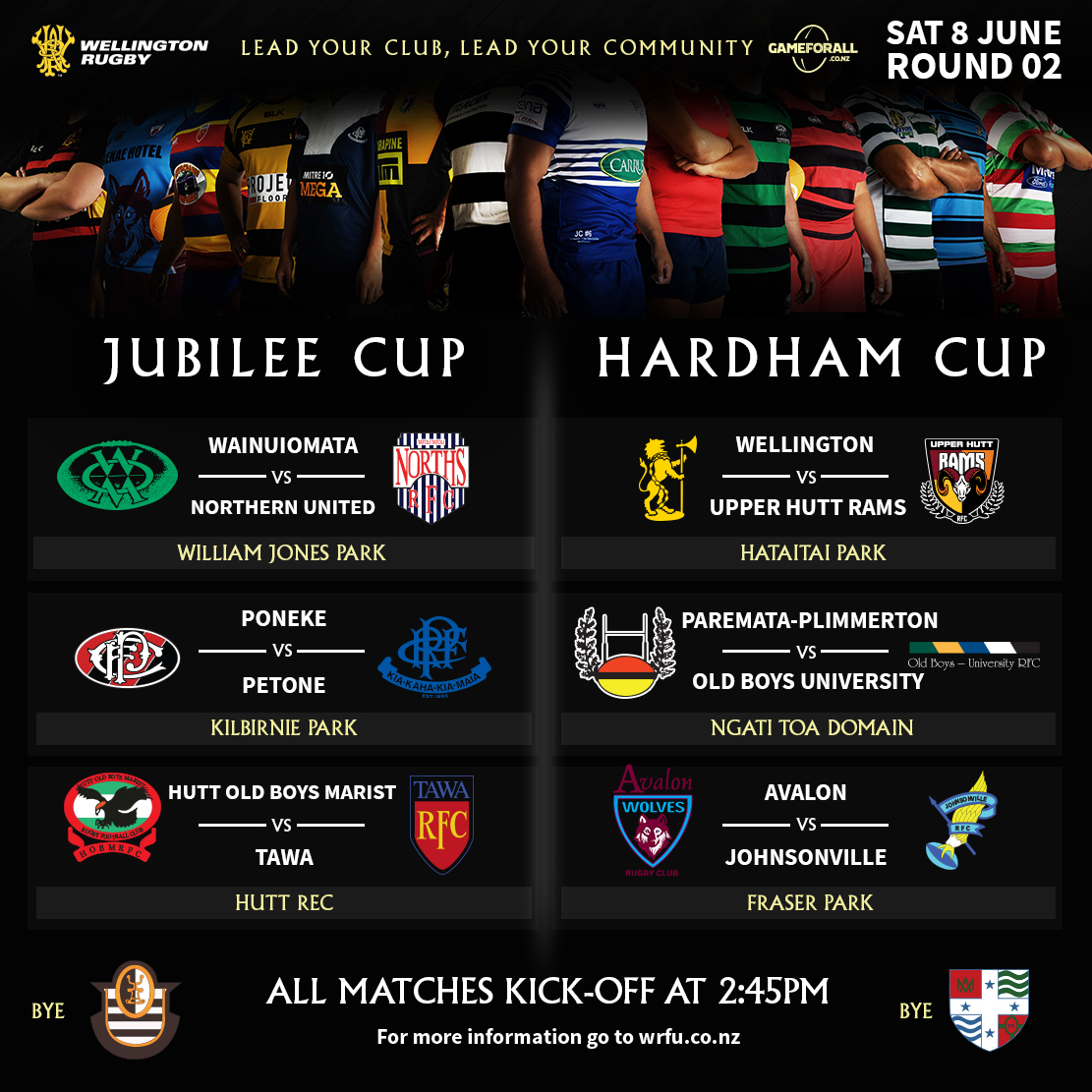 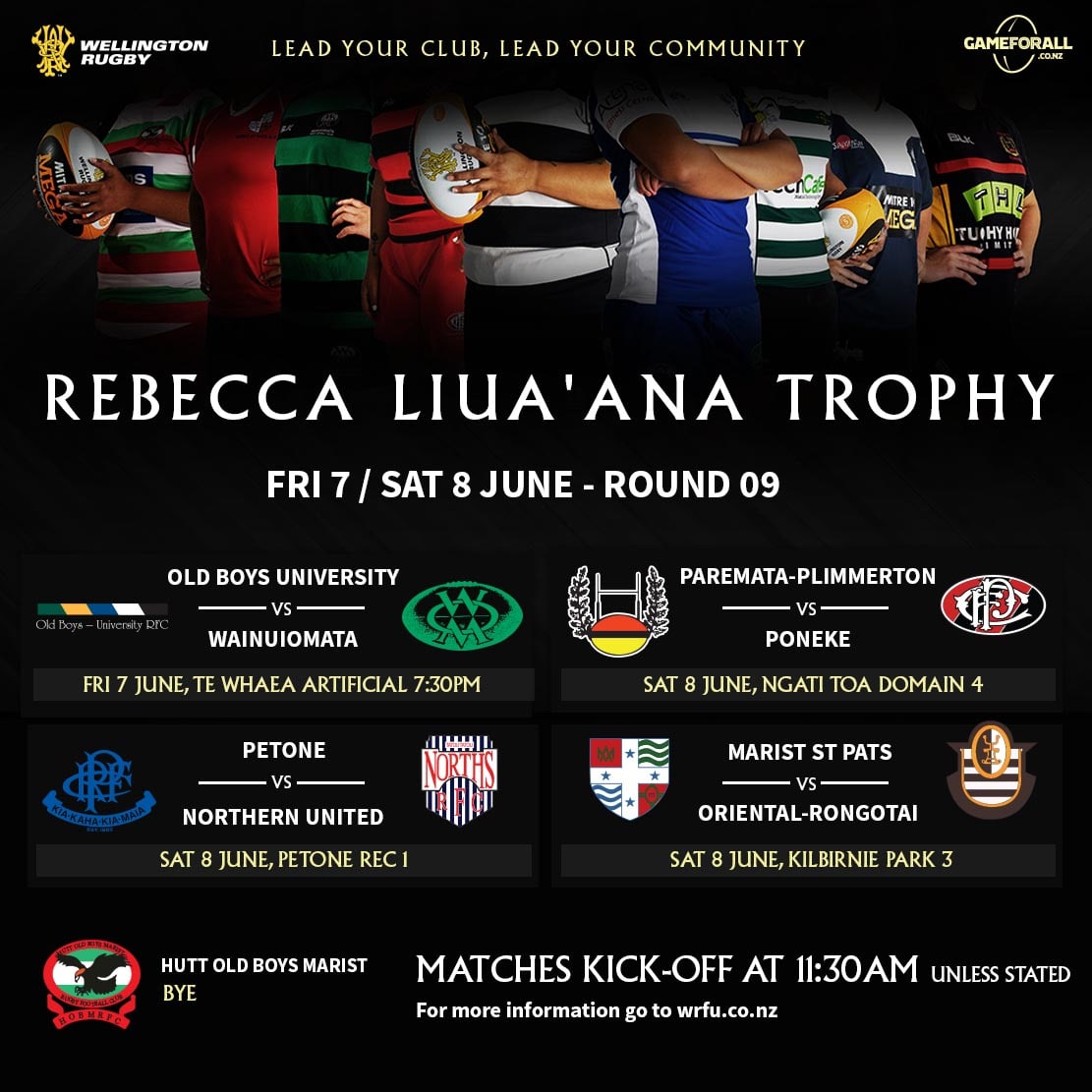 All teams will have their second round campaigns underway when the second round of the 2019 Jubilee Cup and Hardham Cup kicks off around the Wellington region tomorrow afternoon.

First round winners Hutt Old Boys Marist (Jubilee Cup) and the Avalon Wolves (Hardham Cup) come off their opening round byes, while eastern suburbs sides Oriental-Rongotai and Marist St Pats have their byes this weekend.

Previews of the Jubilee and Hardham Cup matches are below.

Two of the three Jubilee Cup curtain-raiser Premier Reserve games pit last week’s winners against losers. Ories, Norths and Petone all won with bonus points, with Norths playing Wainuiomata and Petone meeting Poneke after losing narrowly to them a fortnight ago. HOBM are in action for the first time against Tawa who runners-up to Marist St Pats in the first round.

MSP’s unbeaten second side has the week off, giving the Upper Hutt Rams and Old Boys University second XVs chances to get an early jump on the HD Morgan Memorial field tomorrow, both away to Wellington and Paremata-Plimmerton respectively.

All Premier Reserve matches are at 1.00pm, with the exception of Wainuiomata v Northern United at 12:45pm.

After losing to newly promoted Oriental-Rongotai in last Saturday’s Les Mills Colts Division 1 opener, first round winners Old Boys University will be keen to open their account tomorrow when they meet Paremata-Plimmerton at Ngatitoa Domain at 1.00pm. Paremata-Plimmerton drew 17-17 with Petone first up so are also searching for their first win.

The Ories Colts turn to meet Marist St Pats, who opened their John E Kelly Cup with a 20-point win over Northern United. That Norths side meets HOBM Green who beat Tawa. The other match sees Petone hosting Tawa.

In Division 2 Colts, Wellington hosts the Upper Hutt Rams, Avalon entertains Johnsonville and Wainuiomata and OBU Black are over the hill.

The Women’s competition resumes after last week’s hiatus and Wellington Pride trial, the first round champions and the make-up of the second round Division 1 and Division 2 to be confirmed.

Ories, Norths and Petone are all confirmed in Division 1 next week, but the rest of the Division 1/Division 2 split for the second round is yet to be determined. The second round kicks off next weekend (15 June).

The ninth and final round of the Rebecca Liua’ana Trophy kicks off tonight at Te Whaea between the Old Boys University Impalas and Wainuiomata/Avalon.

In tomorrow’s matches, Ories will be confirmed as first round winners if they beat Marist St Pats at Kilbirnie Park. Norths are still in contention to win the first round and they travel to third placed Petone.

The Avalon Wolves can wrap up the first round U85kg Paul Potiki Shield with a round to spare if they beat the Paraparaumu side away, while Wests play the Upper Hutt Rams at Ian Galloway Park on their Old Timers' Day.

The Stokes Valley side has the week off after winning the first round Thompson Memorial Cup with a week to spare.

The Poneke Ruffnuts and the Upper Hutt Rams Pirates meet tomorrow in a top-of-the-table Reserve Grade Mike Copeland Cup match. The winner will likely go on to win the trophy next week.

Wainuiomata are the form team in the Jubilee Cup having won five games in a row. On Saturday they beat Ories 21-12 at the Polo Ground.

Norths are actually top of the standings however after blanking Poneke 26-0. Jackson Garden-Bachop punished ill-discipline by kicking four penalties and converting tries from Junior Time-Taotua and Salio Siaunuua.

Two heavy and accomplished backs will headline the first meeting between these clubs in 2019. Norths boasts many threats out wide, but Wainui have successfully stymied most opponents.

Wainuiomata have lost twice at home this season. Norths have lost their last two games away from Jerry Collins Stadium.

The unbeaten Swindale Shield champions had the week off, but will be weary of a Tawa team who’ve won four on the trot and reversed a 14-0 deficit to stun Petone.

Tawa destroyed the Petone scrum with James Coburn celebrating a try in his century celebration game while young lock Hugo Plummer and No.8 Folou Vea showed the kind of promise which could see similar longevity replicated.

Tawa have scored 62 tries this season and only lost 24-25 to Hutt in the Swindale Shield.

Tighthead prop Rei Manaia and halfback Sheridan Rangihuna who were integral members of their first round campaign are missing this weekend. Their replacements tomorrow are representative prop Joe 'Apikotoa and veteran Nick Risdon respectively.

A fortnight ago these clubs met in the final round of the Swindale Shield each needing a win to advance to the top seven. A close tussle eventually ended in both advancing, Poneke via a bonus point.

Poneke have lost three of their last four and need to build some momentum. Petone had their four game win streak snapped by a powerful Tawa.

For Petone, Tupou Sopoaga can’t stop scoring tries and Eduan Struwig is starting to make a name for himself, but they need to match Poneke in the front row.

Poneke will look to Hennie Tui to have a big game while captain Greg Foe may take kickable penalties this time, something that arguably prevented success in the last meeting.

The Upper Hutt Rams were first round victors while the Axemen have dropped their last five. That fact alone would suggest this should be a walkover, but that’s far from the case.

Wellington have been very competitive against Wainuiomata and OBU in recent weeks while the Rams stumbled to success against Johnsonville.

The Axemen will be fielding both Isaac Bracewell and James Polonati at No. 8 and halfback respectively, after both players played for the Wellington XV on Monday.

Matt Goosen has transferred from OBU and will line up at fullback.

The Upper Hutt Rams pack need firepower but will have to do without Lui and Mat Luamanu for at least another week, while Konelio Feaunati will be needed to add thrust in the midfield.

Last year these teams featured in a 49-47 thriller.

Johnsonville pushed Upper Hutt all the way last weekend. Avalon had the bye, but only beat the Hawks 21-17 a fortnight ago.

Johnsonville only made two changes to their starting XV last Saturday, at last suggesting there is some cohesion and confidence simmering at Helston.

Tawera Rameka-Styles will be closely marked by the Wolves, he scored two tries in the previous encounter.

Scott Waldrom, Logan Blake and Lio Afamiliona comprise a pesky loose forward trio tomorrow, that has on occasions challenged the best teams in the region.

Last week Old Boys University celebrated Jonathan Fuimaono’s 150th game with a 34-17 win over Wellington. Prior to that they defeated Paremata-Plimmerton 106-7. Can Paremata-Plimmerton improve from that loss? Three tries against MSP suggests they can.

Taisson Lealaisalanoa has played every game this season for Paremata-Plimmerton and is a key play in their pack.