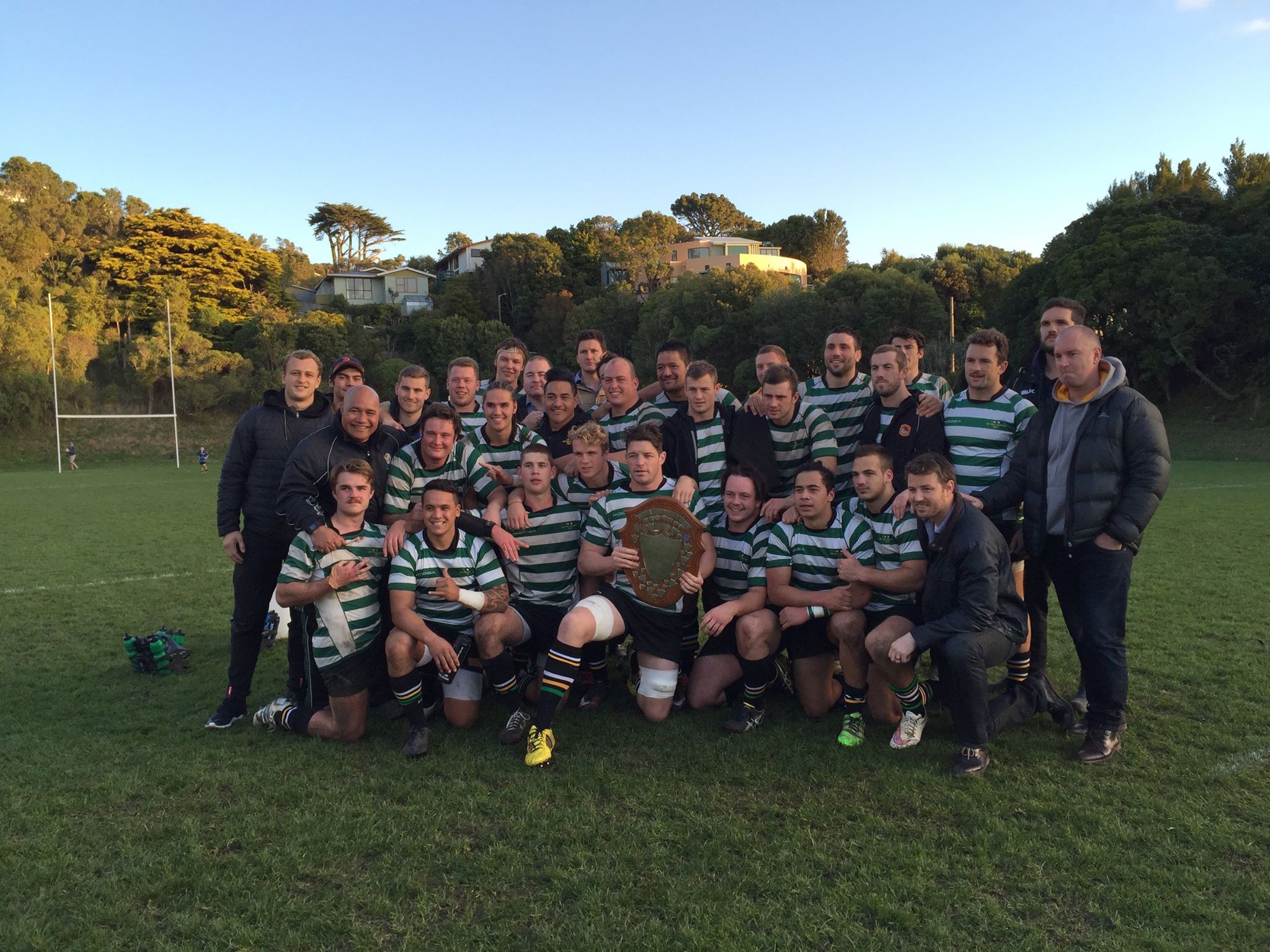 Poneke, Tawa and the Upper Hutt Rams have clinched the final three spots that were up for grabs at the start of the day for the 2016 Jubilee Cup in a pulsating 13th and final round of Swindale Shield matches around Wellington today.

Four teams started the day still in the chase for three Cup places available for the 'top 8' championship round starting next weekend, and Northern United were the team that dipped out by finishing ninth.

These Hardham Cup clubs will be joined by first round Harper Lock Shield winners the Marist St Pat's second XV and the Old Boys University seconds who sealed second place in the Premier Reserve competition.

In a dramatic conclusion to the Swindale Shield, Tawa made sure of their Jubilee Cup place with a 26-13 win over Norths on the latter's Old Timers' Day at Porirua Park. Tawa were fast out of the blocks and struck early with two tries en route to a 26-3 halftime lead. Norths came back into the game in the second 40 minutes but the damage was done and they retained the Sammy Saili Trophy.

Norths supporters were thus left sweating on the outcomes of two other games elsewhere - and neither went their way.

At Evans Bay Park, Poneke came out on the wrong side of a tight battle for the Horan-Millar Trophy and the Bill Brien Challenge Cup to lose 22-23 to Marist St Pat's.

The other match was at the Petone Recreation Ground, where the Upper Hutt Rams came back to beat Petone in the final few minutes to decide their own fate and also knock Norths out that way.

There was joy at the conclusion of that match for the Rams, who were trailing the young Villagers side 22-26 heading into the shadows of fulltime after Petone's Losi Filipo had scored to put themin front for possibly the final time.

But the competition's leading points scorer, second five-eighth Joyner Key was involved in a kick ahead and race to the line for a Rams try that put them 27-26.

The Rams then sealed the win with their young wing Salesi Rayasi sprinting 90 metres to give them a 34-26 win , passage into the Jubilee Cup and possession of the interclub Ted Connolly Cup for another year.

Meanwhile, lost in the radio static and twitter hum-drum was that Old Boys University were presented with the Swindale Shield at the conclusion of their match at Helston Park against Johnsonville.

The OBU Goats had already won the Swindale Shield last week, but they sealed it with a 64-5 win over Johnsonville. They now have possession of both major pieces of Wellington club rugby silverware and will now turn to their defence of the Jubilee Cup.

The Wellington Axemen finished third, beating Wainuiomata 33-26 for the Bill Jones Cup at William Jones Park. With Hurricane Vaea Fifita at lock, the Axemen wrestled control of this contest late in the piece. Paddy Hughes for Wellington and Tau Mamea for Wainuiomata each scored two tries. Hughes finished the first round with 13 tries to his name - the leading try-scorer.

Hutt Old Boys Marist finished off their first round campaign in 10th place with a 47-20 win over 12th placed finishers Avalon at the Hutt Recreation Ground for the Billy Herbert Memorial Trophy.

In a close game between the Hutt Valley neighbours, Avalon held a 15-11 lead after halftime, but the Eagles swooped in the second 40 minutes. Hooker and captain James O'Reilly and utility back Blake McGregor both score two tries.

Marist St Pat's were presented with the Harper Lock Shield today after their 45-12 win over Poneke in the final round.

The OBU Goats accounted for Johnsonville's second side 62-5 to grab the second promoted place to the Hardham Cup.

Petone actually finished second, after beating the Upper Hutt Rams 44-24 today, but can't advance as their top team will be filling the clubs' place at the Hardham Cup.

In other last round Harper Lock Shield results today, Paremata-Plimmerton beat Ories 50-43 and HOBM beat Avalon 69-28 in two high scoring clashes and Wainuiomata defeated Wellington 38-20 and Norths came back in the second half to defeat Tawa 22-13.

The 10-team competition has now been split into the A division contesting the Victoria Tavern Trophy and the B division playing for Senior Women's honours.

Norths defeated Avalon 77-3, with the Collins sisters scoring seven of their 13 tries. Second five-eighth Helen nabbed five tries, while flyhalf Brenda scored two. Norths led 5-0 after20 minutes and then 27-3 at halftime, before pulling clear after the interval.

In the other Victoria Tavern fixture, Wainuiomata earned a four tries to three victory over Old Boys University. Wainuiomata broke a 7-7 deadlock with a try on halftime, turning around with a 14-7 lead and keeping their noses in front until the end to win 28-17.

Ories had the first round division A bye.

In the Senior Women's section, MSP cleaned out the Upper Hutt Rams 73 and HOBM defeated Poneke 34-14. Johnsonville-Tawa had the first round bye.

The second round Colts division A John E Kelly Memorial Trophy kicked off with two matches on Friday night.

Ories defeated HOBM Green 11-3 in one game under lights, while Tawa beat Norths 39-14 in the other.

In week one second round First Grade Johnsonville Centennium Cup results received, there were bonus point wins for first round winners OBU, the Petone Brotherhood and the Avalon Wolves

The Tawa Titans edged out the Kapiti side 22-19 in the first round of Paul Potiki Memorial Shield 85kg games.

The Avalon Wolves beat the OBU Bunnies 21-20, while Eastbourne and the Upper Hutt Rams drew 20-20. Johnsonville beat the Poneke Cavs 40-7 in the other game. First round winners Wellington had the bye.

In Division 2, the Wests Roosters plucked the OBU Spartans 67-7, MSP Green beat Petone 3-5 and MSP Red beat Wellington B 33-0. All three were bonus point winners. Stokes Valley defeated HOBM 13-12 in the other match.

Scots College took down St Pat's Silverstream 21-20 in the match of the day, while Rongotai pipped Wairarapa College 22-20 in Masterton and Bishop Viard defeated St Bernard's College 31-22 in Lower Hutt.

The competition resumes this coming Wednesday when St Pat's Silverstream hosts Wellington in the opening salvoes of the third round.