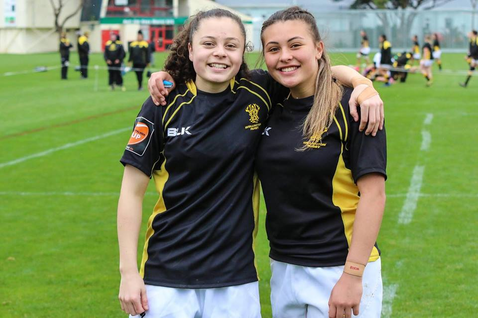 Milly Mackey is Year 13 at Newlands College, but about to start to second year of club rugby in the Wellington Women’s competition.

Here is some more about her and her rugby career to date below.

Tell us about your rugby journey so far?
My rugby began at age five when I started playing rippa rugby. I then progressed through the grades to tackle.

I started off as an openside flanker, which I enjoyed because I always got to be involved in the game on both attack and defence. I played all my junior rugby for the Wellington Axemen, except for my last year which I played for Johnsonville due to the Axemen not having an U13 team. In U13s, I made the Western Bays team as an openside flanker (boys and girls, although there were only two girls in our team and one other from the other two teams, Hutt and Town) which I was co-captain of.

In Year 9 I made the positional switch to halfback due to my size (or lack of). I was young enough to be able to play my U13 year of rugby whilst I was in Year 9. In Year 10 we managed to get a combined Newlands-Onslow college team which I played for. Unfortunately, we didn’t have the numbers the next year when I was in Year 11, so instead I was able to play for Tala Misky at Wellington East Girls’ College. Last year in Year 12, I played my first year of club rugby for Paremata-Plimmerton.

What position are you and what strengths and weakness do you bring to the game?
I’m a halfback. Strengths would be my passing of both hands for my age, box kick, game understanding and ability to get around the paddock. My weakness is my strength, which I am working on in the Academy.

What have been the biggest highlights playing rugby?
The people I’ve met along the way. Making my debut last year at regionals and nationals the Wellington Women's 7s team (Pride 7s) and my first year of women's club rugby (which was last year).

Have you had injury setbacks? If so when, where and how?
I’ve had a couple niggles here and there but thankfully nothing that’s kept me on the sidelines for more than a game or two.

When do you train with the Academy? Who do you train with and what’s involved?
At the moment, for the Women’s Academy we train 4 mornings a week, which consist of 2 strength trainings and 2 conditioning and skill trainings. The Women’s Academy is currently made up of 14 players which involves Black Fern’s 15s players, Black Fern’s 15s wider training group members, Black Fern’s 7s development players and two college girls; me and Harmony Ioane.

You’ve just moved from Paremata-Plimmerton to Petone for your club rugby? What are your expectations for their season and who are the leading players?
This season, I have made the move to Petone so that I could learn more from the players around me. Being able to play at halfback between Jackie Patea-Fereti at No. 8 and Acacia Te Iwimate at No. 10, will enable me to learn and develop, as it will be like having two coaches with me on the field when we play. Other players to look out for other than the obvious Jackie and Acacia, would be Fai Auimatagi and Hope Hakopa.

Who is your favourite player and why?
Aaron Smith because of his bullet passes, the way he controls the game and drives his forwards around the paddock.

What other sports do you play at school?
I’ve played basketball for the past six years but had to drop it this year due to other commitments. I played touch and 3x3 basketball for school this year.