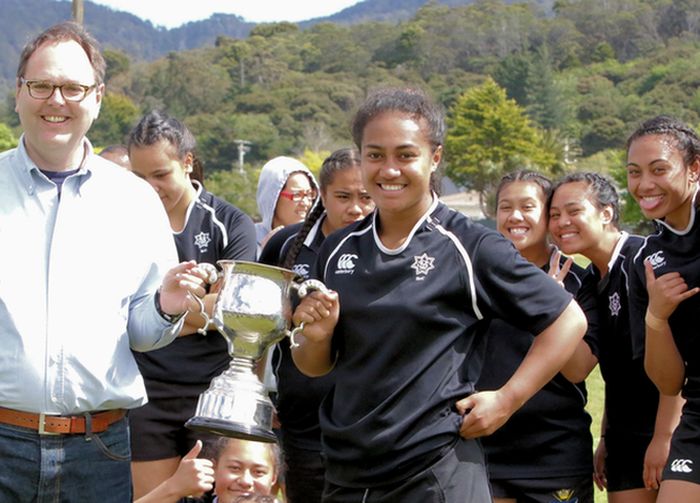 The St Mary’s College rugby team is on a roll.

Fresh from retaining the Wellington Condor 7s Secondary School title, St Mary’s entered last Saturday’s Wellington club championship American Ambassador’s 7s tournament with the goal of testing themselves against the best local senior club teams as preparation for the National Condors in Auckland at the start of the December.

“We went into last weekend’s tournament with the attitude of just trying to play every game as hard as we could to help us prepare for Condors,” the team’s Wellington Pride player Monica Tagoai told Club Rugby this week.

“We didn’t think of winning at all, we just wanted to test our fitness, try out our moves, get some combinations going and work on our lineout and scrum.

“To beat such good teams and to come out with the win was such a surprise to us. There were a couple of games where we walked off thinking that we’d lost, only to be told that we’d actually won.”

Monica further explained winning that tournament also gave some of the St Mary’s players a boost of confidence to try out club rugby next year.

On Labour Day Monday they swept to the Wellington Condors title to earn Wellington’s sole spot at the national secondary school tournament in Auckland.

Last year they won the Bowl competition [finishing ninth] in their maiden Condor 7s appearance, and on current form they could improve this year.

“We’re pretty excited about going up to the Condors again, we’ve been training so hard lately and focussing on doing our best,” Monica said.

“Last year was a good experience for us to get the feeling of what Condors is like. We are really lucky to get the opportunity to go up a second time and we know what we are getting ourselves into and what to expect.”

At the start of this year St Mary’s won the Sir Gordon Tietjens Invitational sevens tournament in Palmerston North. In September the same group of girls returned to Palmerston North to finish runners-up at the National Secondary Schoolgirls fifteens Top 4 title at their first appearance there. They beat two-time defending champions Hamilton GHS in their semi-final and lost to Southland GHS, who won the title on their fifth successive attempt.

What’s more remarkable about St Mary’s rise is the team’s youth and the short time all of them have been playing the game.

This is not a seasoned team of Year 13 individuals, with a couple of Year 14s in the group, who’ve been playing the game for several years.

“I’m the only Year 13 in our sevens team. Lyric is Year 12 and most of the others including Ana, Renee and Cheyne are all Year 11s. We’re all new to rugby this year and last year.”

“I started playing at the start of last year. My cousin introduced me to rugby at the HOBM club. My parents thought I’d get hurt but I kept going to the trainings behind their backs and then I played really well at the NZ Marist Sevens tournament. I then started playing rugby for school and have enjoyed it ever since.”

Monica plays fifteens for HOBM and sevens for Marist St Pat’s, when she’s not playing for St Mary’s.

A theme with the St Mary’s rugby side is that most of them play other sports, and some to an elite level.

Monica used to play netball and this year she captained the St Mary’s Volleyball Senior A team to fifth place at nationals in Palmerston North.

Renee Savaiinaea and Ainsleyanna [Ana] Puleiata are both NZSS netballers and were named Defender of the Tournament and Midcourter of the Tournament respectively at the recent NZSS tournament at Walter Nash Stadium in Taita. Lyric Faleafaga made the tournament team as well, while Renee and Ana were this week named as NZ U21 netball trialists.

Playmaker and first five-eighth in the fifteens team, Cheyne Copeland, plays netball, is a Wellington age-group ranked long-jumper and sprinter in athletics, plays Touch and was a recent member of the NZ U17 Tag team.

Earlier this week, no fewer than seven of the St Mary’s group were named in the WRFU Women’s 7s training squad, the players being: Monica, Renee, Ana,Lyric and Dhys Faleafaga, Cheyne and Lomia Fa'amausili

Monica, who plays centre for St Mary’s in the fifteens game, has already had experience in the representative environment and was a member of the Wellington Pride Women’s NPC squad this year.

She made four NPC competition appearances for the Pride, two off the bench and two on the right wing. She played in both games against eventual champions the Counties Manukau Heat.

She said it will be exciting times for the St Mary’s group to be involved in the representative set-up.

“We were surprised that most of our starting seven has been picked in the Wellington women’s squad The hard work has paid off for all the St Mary’s girls and we’re all really excited and so happy.

The St Mary’s team is coached by Tuga Mativa and Ardie Savea, who both play for Oriental-Rongotai. Tuga has also been named in the Wellington men’s sevens squad this week, while Ardie is currently on tour with the All Blacks.

“It’s been a huge honour having those two as coaches, especially Tuga as he has been our coach from day one and has always put in the hard yards for us.  He also introduced Ardie to us.

“Ardie saw potential in us and came as a helper to start with and then he joined up with Tuga. To have an All Black coach is awesome for us. It also shows how hard Ardie works, in his busy schedule he always finds time to come out and to give us feedback.”

Both the Wellington men’s and women’s sevens squads have their first representative hit-out of the year next weekend when they play the Auckland 7s tournament.