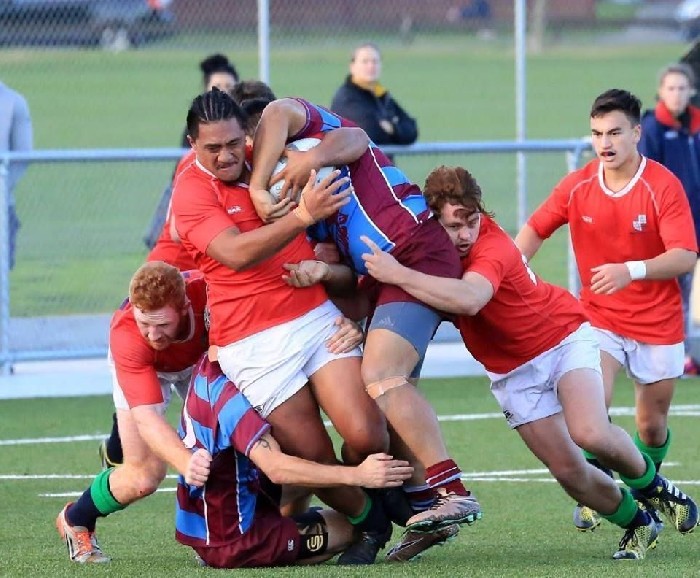 It's a big weekend ahead. At the Premier and Premier Reserve grades the remaining teams for the Jubilee and Hardham Cups will be found, while all other competition club grades start their second rounds. At college level the Premier grades are into another week of action, while hopefully the weight and age grades get underway after weather last weekend put that on hold.

It's also the second weekend of the College/Club program of matches, with the Wainuiomata, Eastbourne, Stokes Valley, Paremata-Plimmerton, Tawa, and Wellington clubs all hosting games; and Northern United and Stokes Valley have their Old Timers' Day.

That's the equation that confronts Northern United (36 points), Poneke (36), Tawa (35) and the Upper Hutt Rams (33) for this weekend's final round, and there will be disappointment for one of them tomorrow night.

The Rams occupy ninth spot, having kept their season alive with last Friday night's win over Poneke at Westpac Stadium. They travel down the valley to take on Petone at the Petone Rec, where the Villagers will be buoyed after knocking off Oriental-Rongotai last week despite knowing that they've been consigned to the Hardham Cup for the first time since 1996 when the new Super Rugby competition deprived them of their star players. Both sides have for the most part stuck with last weekend's winning lineups.

The two sides contest the Ted Connolly Cup, first played for in 1969. Ted, along with brothers Adrian and Eric, played a significant role in the Upper Hutt club in the years either side of WWII. Ted established a post-war team known as "Connolly's All Stars XV", initially comprising returned servicemen, which played an annual match.

Poneke's loss to the Rams didn't mean the end to their hopes, but gave them much to do in the Horan-Millar Trophy "Battle of Kilbirnie" clash with neighbours Marist St Pat's across the road at Evans Bay; the contest also featuring the Bill Brien Challenge Trophy. Marist St Pats are safely through, but it would seem unlikely they'll make it easy for their great rivals.

Great rivals were exactly what MSP's Mick Horan and Poneke's Ken Millar were on the park. The two locked horns many times (when Mick played for Marist) but also great friends off it, with the pair passing away within months of each other in 1982. The trophy that bears their names was inaugurated in 2009, and is currently held by MSP. Both sides start their allocated Hurricanes player; Willis Halaholo will be at centre for Poneke, marking Ryan Setefano who plays his 100th Premier game for MSP, with MSP having the services of 'the Tongan Bear' Loni Uhila up front. Greg Foe and Isaia Petelo will both be absent for their respective sides, away on international duty with Samoa.

As if by fate Norths and Tawa face off in the feature clash of the day on Norths' Old Timers' Day, the date of which has been changed to coincide with the first anniversary with the untimely passing of the clubs greatest son, Jerry Collins. With Collins' headstone also being unveiled over the weekend, it will surely be an emotional occasion. Tawa are largely unchanged from the side that thrashed Pare-Plim, while Norths make several from the side that lost to Wainuiomata, amongst them Api Naikatini making his first appearance for the year.

Aside from the big-picture events, there is also the not-insignificant matter of the Sammy Saili Memorial Trophy the two clubs play for at stake as well. Saili played over 200 Premier games across the two clubs (Norths 1992-95, Tawa 1996-2008), coached both Tawa club juniors and at Tawa College, and was a respected church and community leader until his sudden passing in 2009. The trophy was presented by his family the following year, and is currently held by Tawa.

The possible scenarios are wide and varied, but at the heart of it the Rams must win their encounter to be a realistic chance and a loss eliminates them, unless they get two bonus points AND Tawa loses with none. A win for the other three will guarantee passage to the Jubilee Cup, while a loss leaves them at the mercy of what the Rams do. If the Rams are ahead in their match and go on to win, that puts pressure on the other sides to also be doing the same, or at worst be gathering bonus points.

If two sides finish in a tie for eighth-place, then the tiebreaker is who won the head-to-head match between the two. That hurts Poneke badly, as they lost to all three of their rivals, while Norths beat Upper Hutt and the Rams beat Tawa. The only three-way possibilities that result in a tie including eighth and ninth places involve Poneke, Upper Hutt, and either Norths or Tawa all ending on 37 or 38 points, while its possible all four end up on 38 points (if Norths and Tawa draw but only the latter gets a four-try bonus). In both cases Poneke would be the ones to miss out.

One thing that will be certain is that at Porirua Park, Evans Bay, and the Petone Rec there will be plenty of people searching out any information they can get from the other two venues.

Helping that will be that all three matches will be broadcast. Adam Julian will call the Norths vs Tawa game for RadioSport (1503AM), and Gordon-Noble Campbell will have Petone vs Upper Hutt on Te Upoko (1161AM).

The remaining four matches are all dead rubbers in the sense of competition standings, but plenty can still be expected from them.

Old Boys-University will be presented with the Swindale Shield for the first time after they take on Johnsonville at Helston Park in the clash of top vs bottom, while Oriental-Rongotai will look to rebound when they travel out to Ngatitoa to face Paremata-Plimmerton.

Wainuiomata host Wellington at William Jones, with their respective wins last weekend securing safe passage through to the Jubilee Cup. They will still have something to play for with their Bill Jones Cup, on the ground named for the same man and late Wainuiomata Life Member.

Local bragging rights and the Billy Herbert Memorial Trophy will be at stake at the Hutt Rec when Hutt Old Boys Marist and Avalon meet, with unusually both sides having been shutout last weekend. Like Wainuiomata and Wellington they will meet again in the next few weeks, albeit in the Hardham Cup. Herbert was a former HOBM prop who shifted clubs to Avalon ahead of the 2005 season, but suffered a heart attack at the final training before the opening round of matches.

Old Boys-University's win over Avalon coupled with Poneke's loss to Upper Hutt put them into the box seat for elevation to the Hardham Cup alongside MSP, and they should achieve that with ease when they take on winless and bottom Johnsonville in the early game at Helston. A bonus point win will secure it for the Goats seconds - something every side that has played the Hawks this year has achieved - irrespective of whether Poneke do the same against MSP, as they beat Poneke in their head-to-head contest.

In tomorrow's other matches Petone will look to finish second when they take on the Rams in the early game at the Petone Rec, HOBM host Avalon at the Hutt Rec, and Paremata-Plimmerton welcome Ories to Ngatitoa. All of these matches kick-off at 1pm, while there are slightly earlier 12.45pm starts for Norths and Tawa in the early game at the JCS, and Wainuiomata and Wellington at Mary Crowther.

After last week's final round the grade splits into two sections of five for the remainder of the season. That kicks off tonight with two games in each of the Premier (Victoria Tavern Trophy) and Division Two grades.

In the Premier division Norths will look to rebound from their first loss of the season when they open up their championship defence against Avalon at Porirua Park, while Old Boys-University and Wainuiomata clash at Alex Moore Park. Oriental-Rongotai has the first week bye.

Three of the matches kick-off at, or just after 7.30pm, with Norths vs Avalon at 8pm.

The second round of the Colts competition also kicks off tonight with a pair of matches under lights. Oriental-Rongotai takes on Hutt Old Boys Marist at Te Whaea at 6.15pm, while Norths and Tawa start the weekend's festivities at Porirua Park with their 6pm kick-off; Norths finished eighth in the first-round while Tawa vaulted MSP into second behind OBU Green.

The remaining three games are all tomorrow. Division 2 JRD Cup winners Johnsonville have exercised their right to promotion, but face a tough start when they host Paris Memorial winners Old Boys-University Green at Newlands Park at 12.45pm. Johnsonville replace Petone who finished bottom and were relegated after having five points deducted by the WRFU last week for an eligibility breach. Marist St Pats and Poneke clash on the St Pat turf, and Wellington visit the Upper Hutt Rams at Maidstone, with both games 1pm starts.

The lightweights get back underway with a full round of matches tomorrow. In a pair of 1pm kick-offs the OBU Bunnies and Avalon meet at Te Whaea while Poneke and Johnsonville do likewise at Kilbirnie Park.

Like the Colts there has been midseason promotion with Division 2 winners Kapiti and runners-up Upper Hutt Rams stepping up, replacing relegated HOBM and Stokes Valley. Kapiti make the trip south to take on Tawa at Lyndhurst, while the Rams venture out to HW Shortt play Eastbourne, both at 2.45pm. First round winners Wellington have been given the week off with the bye

First-round winners Old Boys-University start their campaign for the trophy double and to continue their unbeaten season when they head to Kilbirnie Park to take on Poneke. Runners-up Norths begin their challenge at home against MSP, the Petone Brotherhood start their quest to claim the silverware when they face Tawa on the Rec. The fourth match is between the two bottom sides from the first round, Avalon and the defending grade champs Petone Saxons on the Fraser Park artificial. All matches kick-off at 2.45pm, with HOBM having the week one bye

Just three games in the Premiership tomorrow, with the fourth game of the round having been played on Wednesday with Wellington College beating St Pats Town 20-16 in their annual Traditional match. Rongotai make the journey over the Rimutaka's to Masterton and Wairarapa College for a 1pm kick-off, and the season's two newbies, St Bernard's and Bishop Viard, clash for the second time already this season (Viard having won their annual preseason match) at the Lower Hutt school at 2.30pm. Also at that time is a clash of two heavyweights, Silverstream and Scots, out at Silverstream. The Upper Hutt school had to work much harder than the 38-3 scoreline would suggest against Viard, while Scots fell to Town in a close 27-24 result.

After the weekend eyes turn to Wednesday afternoon's Traditional between home side Silverstream and visitors Wellington College, which will also be carried on Sky TV.

In Premier 2 Wainuiomata and Porirua meet in the College/Club curtainraiser at William Jones at 1pm, while at the same time the Silverstream 2nds host neighbours Hutt International. There are 2.30pm kick-offs for St Pats Town 2nds and Kapiti on Kilbirnie #2, Tawa hosting Taita, and Paraparumu and Aotea up the coast.

The other College/Club games come from the lower grades. The Premier 3 contests between the Wellington College's 2nds and Upper Hutt, and Naenae and Mana are at Hataitai Park and Delaney Park respectively. The Premier 4 game between the Tawa and Porirua 2nd XV's is at Lyndhurst with Aotea and Scots 2ndXV's at Ngatitoa; and in Premier 5 the Hutt Valley HS and HIBS 2nds take to HW Shortt.