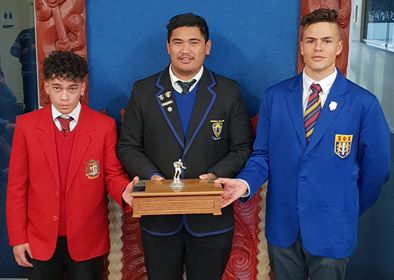 Stored inside the Beard Trophy is a book with records of every single game.

One of the most important jobs of the defending or winning team after Beard Trophy games is to update the ledger with a short match report, the scorers and the teamlists, before replacing the booklet back inside the boxed shape trophy for the next match.

The details of many memorable matches for the Beard Trophy and of some famous players who have gone on to representative honours in rugby and other sports is on record inside the Beard Trophy.

The Beard Trophy was donated 50 seasons ago by the family that bears its name for an annual match between Tawa and Mana Colleges.

In subsequent years, Porirua College, Bishop Viard College and then Aotea College joined up and it became an annual 'Ranfurly Shield' style trophy for competition amongst these five schools that make up Tawa and the Porirua basin.

"The Beard Trophy means a lot for the local schools in the area and matches between these schools whenever the Beard Trophy is on the line always go up another notch in intensity and significance," said Leota.

"Traditionally the Beard Trophy has brought a lot of school pride with it. When I was at school Mana College would march down to Bishop Viard en masse to support their team and Bishop Viard would do likewise going to Mana. The atmosphere it created is just like the traditional midweek games played between Wellington College, the two St Pat's Colleges and Rongotai College."

Leota himself was part of one of the big Beard Trophy upsets. "Bishop Viard had been the holders for a few years, but we played out of our skins to beat them. Our team that day had two of the So'oialo brothers, Sam and Steven. We had to defend it the following week against Porirua College, which we did successfully - winning 6-3 but only after Porirua bombed a try in the corner on fulltime."

Other recent famous players to play in Beard Trophy include the Ellison's, Tamati, Jacob and Leon, John Schwalger, TJ Perenara, Alapati Leiua, Iva Motusaga, Elvis Seveali and Serge Lilo who was in Aotea College's team when they lifted the trophy for the first time.

These players and others return to help the current teams, such as old boy Schwalger handing out jerseys pre-match to the Bishop Viard First XV or former Poneke flanker Peter Savelio and Norths prop Peter Tupua delivering words of motivation.

The Beard Trophy format sees four matches played every season. At the start of the year, the current holder draws the challengers in order that the game will be played out of a hat. If the holder is beaten then the next challenger plays the new holder in the next scheduled match and so on.

Bishop Viard were the holders of the Beard Trophy in 2015-16, but last year saw a changing of the guard in the very first match when Porirua College beat them.

Porirua College then held off successive challenges from Mana, Aotea and Tawa to lock the Beard Trophy away for the summer.

Tonight at Porirua Park they do it all again with Porirua accepting the first challenge of 2018 against Mana College.

Porirua College is in the Premiership this year, while Mana is a Premier 3 team, so on paper Porirua would be favoured to win its first defence of the year.

But this is the Beard Trophy and anything can happen.

Speaking on behalf of the defending team and school, Porirua College Head of Sport Dan Squire said their school is proud to be Beard Trophy holders heading into the 50th season and Wednesday's first defence of the year will be a proud occasion for them.

"I think it's the tradition of the Beard Trophy that makes it so highly valued," adds Squire. "We don't have any other 'traditional' fixtures or trophies with any sort of history. It goes back to the beginning of our college and the players feel a real sense of representation of the last 50 years of First XVs at Porirua College."

"It really is the highest prize in our rugby year. I've been at Porirua College for 10 years and this is only the third time Porirua College have won it in that time. Only a minority of players will be in a Beard Trophy winning team.

"The books contained in the trophy itself give it a visible link to the past as they contain the teamlists and game stories since its inception. We feel extremely privileged and grateful to be the current holders and look forward to this year's challengers."

"We were defending the trophy at home, and the whole school was talking about it," exclaims Fa'atafa. There was so much hype around it. I remember the forwards thought it would be a good idea to all shave our heads on the day. Maybe it was to try and scare the So'oialos into submission. So the day of the game we marched down to the seventh form common room and shaved our heads. It didn't help the result, but it was fantastic to see how excited the schools and communities in the Porirua basin get. It is the same now as it was back 21 years ago. The chanting, the laughter, the characters!"

For the record (as the booklet says), Mana College won 48-11 that June day in 1997, with Rodney So'oialo at No. 8 for Mana and left wing Ian To'omaga scoring four tries. Fa'atafa was Tawa's hooker and Junior Togia, who would go on and play 200 games for the Tawa Premiers in club rugby, was centre.