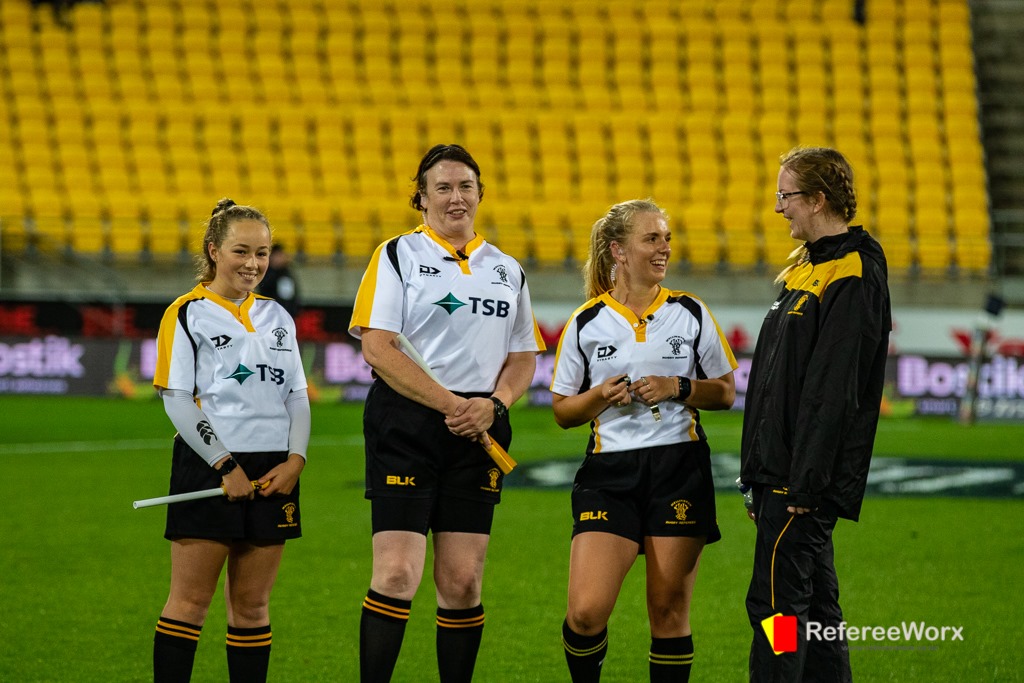 The all female match officials panel that officiated the Rebecca Liua'ana Trophy match at Westpac Stadium on 17 May 2019. Photo: RefereeWorx

This year marks 125 years of rugby refereeing in Wellington. A memento “125th” key ring is available from the WRRA and a dinner will be held at the association’s annual awards night in September.

The history of refereeing in Wellington goes back to 1894 when the NZRU established a referee’s association based on the rules and papers of the Queensland Referees Association. The first Branch was established in Nelson and closely followed by Marlborough and then by Wellington, on 25 May of that year.

In those formative seasons for rugby, the practice was for the two competing teams in any given game to agree on a referee and obtain his consent to act as referee for their fixture, with such agreement and consent notified to the secretary of the association, no later than four days before the match. In the event of no such notification being received, the association then selected the referee.

In 1900, both an Appointments Committee and an Examination and Classification Committee were formed. In 1901, the association had also formed a Qualifications Committee.

The early years were not without teething problems, however, with several disputes flaring up between the association, the WRFU and the clubs.

For example, in 1906, the Petone club rejected the referee appointed for their competition match. In this case, the association declined to change the appointment, and so Petone declined to play the match.

In the 1907 season, a senior club questioned the right of the association to make appointments to any games at all; the result being a suggestion from club delegates to set up a new Appointments Board, controlled by the union, comprising representatives from the union and the association, and players. Initially a group of seven, it quickly became a group of three, with only one voice from the association.

Matters came to a head in 1913, and following an ongoing dispute between the Referee’s Association members and the Rugby Union (representing the clubs and the players), the association was disbanded and the new 'The Wellington Rugby Referees' Association" was formed on 21 July 1914.

This WRRA was formed to ensure that there was (and continues to be) a strong alignment between the interests of both groups, with overall power resting with the Rugby Union.

Mr Edgar Wylie was elected as the first Chairman of The Wellington Rugby Referees Association, and was a member of the Management Committee of the NZRU.

The WRRA has been going strong for the past century and continues to be a strong force in the modern era.

After a recent decline, referee numbers have been increasing, with 147 referees affiliated to the association in 2018 and a retention rate of 93 percent.

At the top end, six referees were named in 2018 end of year squads. The professional referees are Mike Fraser and Ben O’Keeffe, both of whom are going to this year’s World Cup, with Nick Hogan (refereeing this weekend’s Jubilee Cup final), Richard Gordon, Vincent Ringrose and Monique Dalley joining this pair in the squad. Dalley was the first WRRA female referee at this level and was the assistant referee in the 2018 Farah Palmer Cup Women’s Division 1 final.

The future of the association looks bright, with a youth policy in place to bring through young whistle blowers, and an increased emphasis on recruiting ex senior & premier players due to their knowledge of the game. With women’s rugby on the rise, the recruitment emphasis also applies to females as there is now a lot of exciting opportunities for them.

As an integral part of the local rugby community, the WRRA always has an open invite to anyone, but particularly to coaches and managers, to join them at their training meetings so as to give insights into how referees think, train, and what interpretations are placed on the current laws of the game.

Interested in becoming a referee? For the best seat in the house call “0800 referee”, visit www.wrra.org.nz or search for the WRRA on Facebook.